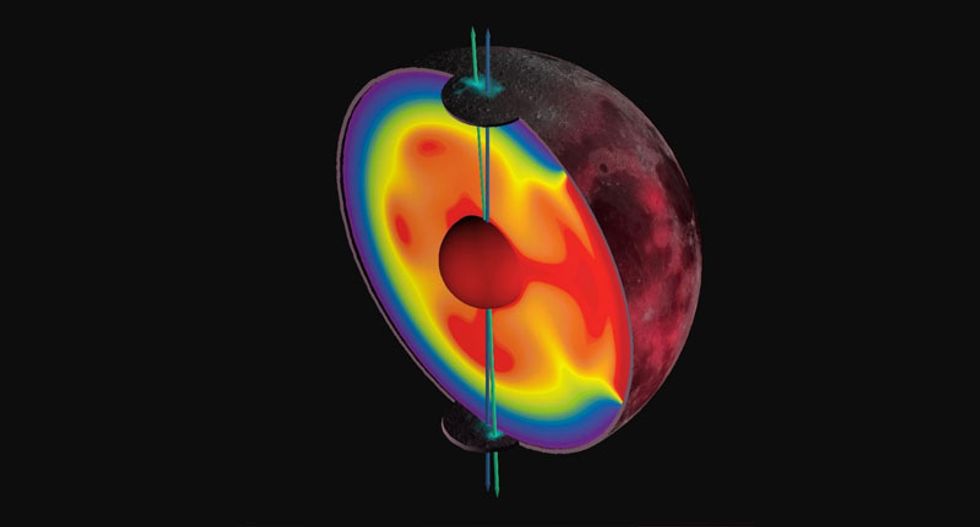 This image obtained from Nature Publishing Group on March 23, 2016 shows an artists rendering detailing how over the past 4.5 billion years, the Moon has changed its orientation with respect to the Earth—revealing many different faces (AFP Photo/James Tuttle Keane)

Telltale patches of water ice on opposite ends of the Moon reveal that Earth's orbiting companion once spun on a different axis, according to a study released Wednesday.

The six-degree tilt, which happened several billion years ago, was likely caused by an ancient volcanic formation on the near side of the Moon, said the study, published in Nature.

The data underlying this startling discovery has been in plain view for nearly two decades, but scientists had failed to connect the dots, one of the researchers told AFP.

"It was kind of hidden because of the way we plotted polar maps," explained co-author James Keane, a researcher at the University of Arizona.

Two-dimensional representations create a subtle distortion, obscuring the fact that observed concentrations of ice near each pole were exactly 180 degrees apart -- and thus on an axis running through the dead centre of the Moon.

"That is my pet hypothesis about why nobody thought about this before," Keane said.

The man who finally put the top-and-bottom pieces of the lunar puzzle together was co-author Rich Miller of the University of Alabama.

Having located the largest concentrations of water ice near the current north and south poles by detecting hydrogen molecules -- the "H" in "H2O" -- he rotated a 3-D model to see how they would line up.

"He found a Sigma-8 correlation," which means that the odds of it being a coincidence were about one-in-a-million, said Keane.

That there was any ice at all after three billion years is due to the fact that the Moon spins on a rotation at a right angle with the Sun, which means its poles are in constant shadow.

Indeed, the lunar poles are among the coldest regions in the Solar System -- chillier, even, than the atmosphere around distant Pluto.

Even after the axis tilted, the Sun couldn't reach the frozen H2O, which remains trapped at the bottom of polar craters or hidden behind mountains.

If the Moon's axis had shifted a few degree more, however, the ice would have evaporated under the Sun's intense radiation.

After the team led by Matt Siegler of the Planetary Science Institute in Tucson, Arizona uncovered the Moon's "polar wander," as scientists call it, a key question remained: why?

"I did an analysis to see where there might have been an anomaly -- a disturbance to the Moon's mass -- that could have caused this," he said.

And that, he continued, led to another "eureka" moment.

The calculations immediately pointed to a well-known volcanic formation on the near-side of the Moon called the Procellarum KREEP Terrane, or PKT for short.

Ian Garrick-Bethell, a planetary scientist at the University of California in Santa Cruz, said this was a "plausible mechanism" for explaining the lunar tilt.

"Planets can change their orientation if their internal mass distribution changes," he said in a commentary, also published in Nature.

"Pockets of dense material tend to be close to the equator to minimise the planet's spin energy."

In the case of the PKT -- the Moon's most radioactive and volcanic region -- the heat it generated made it less dense, creating an imbalance.