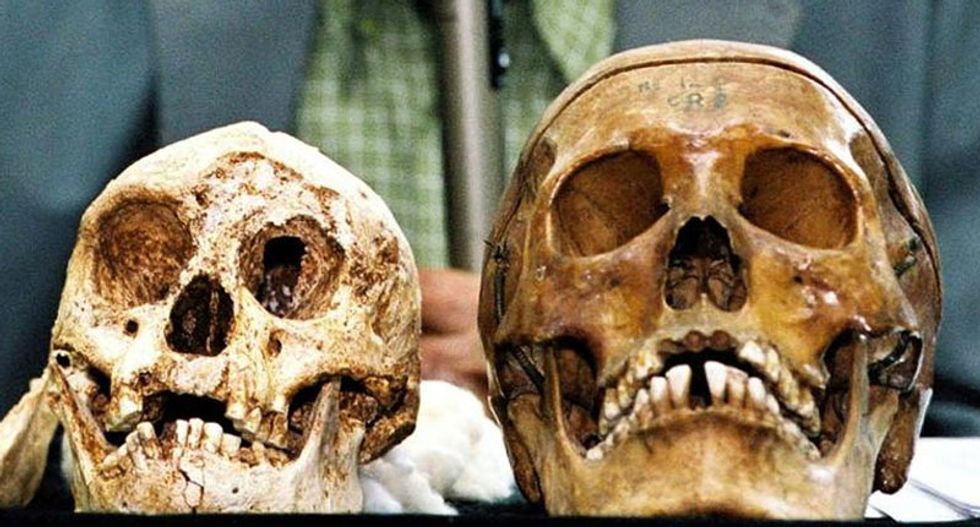 A group of extinct human relatives dubbed "hobbits", which left tantalising traces of their existence in an Indonesian cave, disappeared much longer ago than previously thought, archaeologists said on Wednesday.

Homo floresiensis, a primitive, diminutive hominin, inhabited the Liang Bua cave on Flores island from about 190,000 to 50,000 years ago, reported the team, which spent years accurately redating sections of the archaeological site.

The pint-sized creatures were previously said to have lived in the cave until as recently as 12,000 years ago.

This would have meant they survived until long after modern humans reached Southeast Asia some 50,000 years ago, and may even have lived side-by-side with our ancestors.

The redating of the dig site, which has yielded fossils of hobbits and their stone tools, did not make it any clearer whether H. floresiensis were likely to have crossed paths with Homo sapiens.

"Whether H. floresiensis survived after (50,000 years) ago -- potentially encountering modern humans on Flores... -- is an open question," the team wrote in the journal Nature.

The hobbits of Liang Bua have been the cause of much scientific controversy since their remains were first discovered in 2003.

Were they a human ancestor? A different species altogether? Or humans suffering from dwarfism or microcephaly, the brain-shrinking disease afflicting babies in Latin America and the Caribbean today?

An adult hobbit stood about a metre (three feet) tall and weighed about 25 kilogrammes (55 pounds).

Dubbed hobbits by scientists, after the short, hairy-footed creatures in J.R.R. Tolkien's "The Lord of the Rings" trilogy, they had small brains, about the size of a chimpanzee's, and relatively large feet for their stature.

H. floresiensis shared Flores island with pygmy elephants and giant rats, storks and lizards -- species which went extinct at about the same time as all traces of hobbits are now known to have disappeared from the cave... and coinciding with the arrival of modern humans.

There is no scientific evidence they ever met, but Flores locals tell stories of an ancient people called "ebu gogo" which lived in caves, were short, stocky and not all that bright, stole food and could not cook.

Some have suggested these legends may be fact rather than fiction -- retold memories of encounters with H. floresiensis passed down from generation to generation.

For the new study, an international team of researchers re-examined the fossil-containing layers at the dig site, and found that some areas had been incorrectly dated.

"We dated charcoal, sediments, flowstones, volcanic ash and even the H. floresiensis bones themselves using the most up-to-date scientific methods available," said study co-author Richard Roberts of the University of Wollongong in Australia.