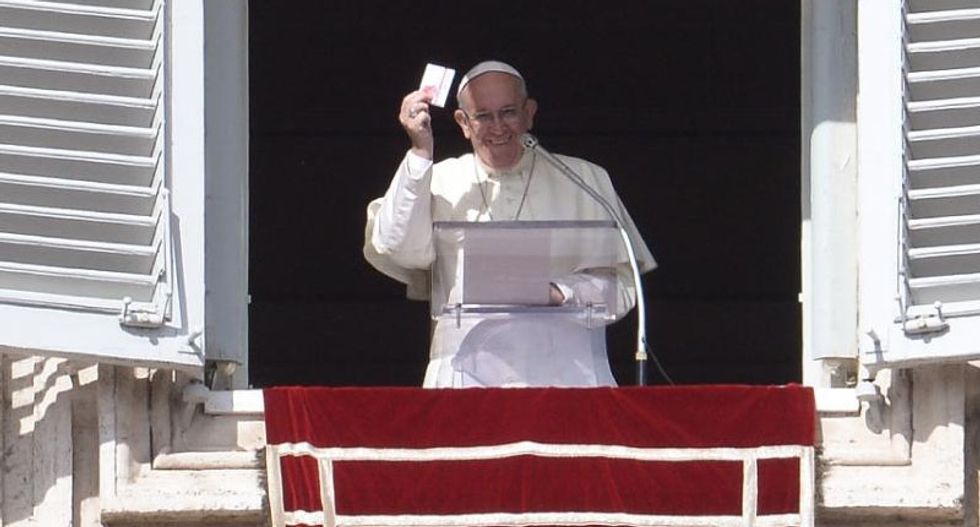 Pope Francis addresses the crowd from the window of the apostolic palace overlooking St.Peter's square during his Sunday Angelus prayer at the Vatican on February 21, 2016 (AFP Photo/Filippo Monteforte)

Many words, little action: three years after Pope Francis's election, victims of priest sex abuse are bitter and disappointed, accusing the Church of having failed to punish guilty clerics and end a culture of complacency on the issue.

The recent Australian Royal Commission hearings of Vatican number three George Pell and a preliminary criminal probe into accusations that Lyon's archbishop, Philippe Barbarin, covered up for a paedophile priest has put the question of Church complicity in abuse back at the top of the Vatican agenda.

Francis came to power promising a crackdown on cover-ups and a zero tolerance approach to abuse itself.

But victims still feel they are not been listened to, that bishops are still failing to hand criminal priests over to the appropriate authorities and that a conspiracy of silence remains the order of the day, right up to the top of the Vatican hierarchy.

The growing discontent with Francis's record on ridding the Church of the taint of paedophilia is in sharp contrast with how he has performed in other areas.

As he prepares to celebrate Sunday's third anniversary of his election, the Argentinian pontiff boasts genuine star status around the world thanks to his charismatic, simple style, his defence of the world's poor and efforts to reform the Church and bring it closer to ordinary believers.

But despite an encouraging start, Francis has failed to definitively draw a line under decades of abuse which ruined the lives of tens of thousands of young Catholics and badly tarnished the standing of the Church in the eyes of believers and broader society.

Francis has made it clear bishops who cover up for abusers have no place in the Church and has put in place legal structures enabling paedophile priests to be tried under Vatican law. He also established his own advisory panel on the issue.

But the panel is now disintegrating with one prominent member, Peter Saunders, recently telling AFP he felt betrayed by Francis and that he had been tricked into taking part in what he described as a whitewashing exercise.

Francis won plaudits for meeting with victims in Rome and in Philadelphia during last year's visit to the United States. But more recently he has come under fire for declining to repeat the gesture in Mexico or for the group that travelled from Australia to listen to Pell give evidence to the Royal Commission.

With the Oscar-winning film "Spotlight" further increasing public awareness of the abuse issue, "there is a real risk of this issue becoming the thorn in the foot of this papacy," said Marco Politi, one of Francis's biographers and a leading Vatican expert.

Politi said the "decisive test" of whether the Vatican hierarchy was serious about addressing the problem was whether Church authorities were truly willing to hand priests over to the criminal authorities. "Outside of cases where the judicial system gives them no option, the majority of bishoprics don't want to talk about that."

Ignazio Ingrao, Vatican correspondent for Italian weekly Panorama, said many local dioceses remained "incapable of moving beyond the secrecy mentality and the reflex of burying scandals." He also noted that the Vatican's ability to handle cases brought to its attention was severely compromised by staff shortages.

"I don't doubt Francis's desire to create a zero tolerance culture," he added. "He has made it clear that the religious authorities must cooperate with civilian ones."

Direct to the point of bluntness on other issues, Francis seems to have a "gut-level hesitation" when it comes to tackling the abuse issue, possibly fuelled by a belief that it is something he does not fully understand, suggested American Vatican expert John Allen in a column for www.cruxnow.com.

Andrea Tornielli, who writes for the website Vatican Insider and knows Francis well, says he does not detect any reticence to speak about the subject or when it comes to sanctioning offenders.

"The pope has spoken unequivocally, referring to diabolic sacrifices. He is trying to change the mentality," Tornielli told AFP. "One can very well understand the criticism levelled at him by victims and those close to them. But the most important task he has to accomplish is to create the conditions so that cover-ups do not happen ever again."