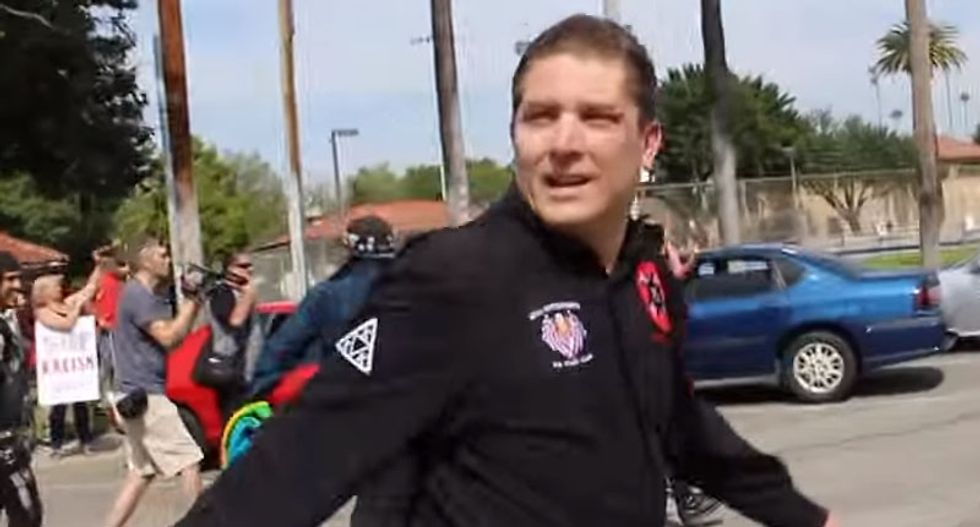 A member of the Ku Klux Klan who stabbed three counter-protesters in Anaheim, California, over the weekend lives in a ritzy home with his mother in San Francisco, according to SF Weekly.

It appears he also has Jewish ancestry.

Charles Edward Donner, 51, resides in the Marina District in San Francisco, "where he lives with his mother in an extremely expensive house across the street from the Palace of Fine Arts," SF Weekly reported. The 3,500-square foot home sold for $1.2 million in 1988.

Donner, who changed his name in the mid-1980s, is the son of Charles D'Honau. Donner's father graduated from Princeton University and was a former publisher of TIME magazine in Japan. He died in the 1990s, leaving his son and his wife in their current home, SF Weekly reported.

Anaheim police spokesman Sgt. Daron Wyatt said Donner claimed he was unemployed while he was detained.

Though the Ku Klux Klan includes Jews among the ethnic groups it hates, Donners' family appears to have Jewish ties. His paternal grandfather, William D’Honau, was the son of German immigrants and his "native tongue" was listed in the 1920 United States Federal Census as "Yiddish," according to El Tecolote.

"All I can say is he’s very mentally ill," Donner's brother, Bill D’Honau, told the newspaper.

Donner, an Exalted Cyclops of the Loyal White Knights, was taken into custody on Sunday after a brawl broke out between members of the Ku Klux Klan and counter-protesters at a KKK rally. Police arrested Donner on suspicion of stabbing three people, but he was later released after police said video showed he acted in self-defense.