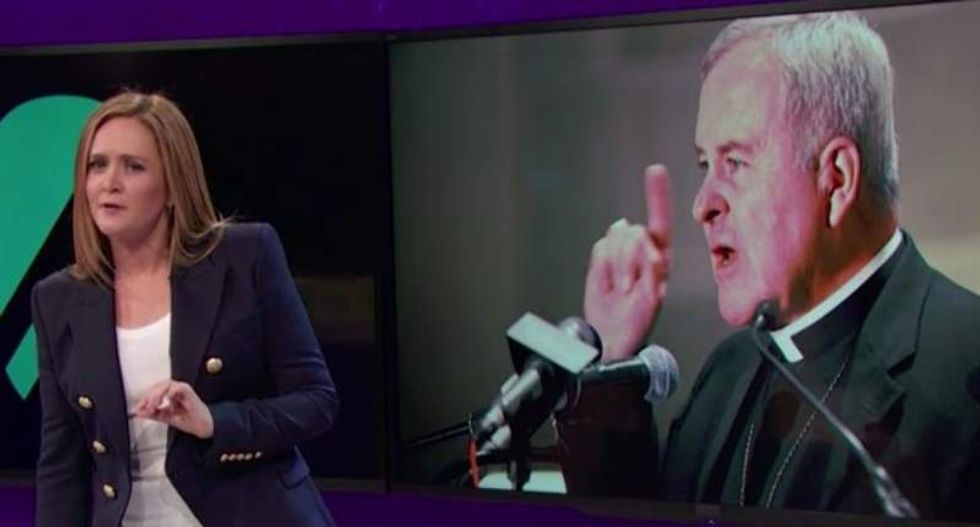 Samantha Bee put her money where her Thin Mints were on Monday as she offered support to the Girl Scouts of Eastern Missouri against St. Louis Archbishop Robert Carlson.

"You have underestimated our love of girl power -- and our love of cookies," Bee said to Carlson before revealing that the program bought a "sh*t-ton" of Girl Scout cookies to give to her audience. She also directed viewers to her website, which is encouraging them to "ruin an awful archbishop's day" by either buying cookies or donating to the Girl Scouts directly.

Carlson drew Bee's ire after he contacted local parishes and urged them to cut ties with the Scouts, saying they were "becoming increasingly incompatible with our Catholic values."

Among the behaviors troubling Carlson, Bee noted, was the fact that the Scouts were working with Amnesty International.

"I guess trying to stop the beheading of political prisoners doesn't count as 'pro-life' enough for him," she quipped.

However, she also highlighted Carlson's testimony in May 2014 concerning the sexual assault committed by former Father Thomas Adamson. Adamson met with Carlson in 1980 while both men worked under the Archdiocese of St. Paul and Minneapolis. At the time, Carlson handled sexual abuse cases for the archdiocese, but Adamson's crime was never reported.

"You knew it was a crime for an adult to engage in sex with a kid," a prosecutor can be heard saying in footage of Carlson's testimony.

"I'm not sure whether I knew it was a crime or not," Carlson responds.

Yet at the same time, Bee said, Carlson found the Girl Scouts' support for contraception to be part of "a troubling pattern of behavior."

"If you don't want girls getting knocked up and you won't let them have contraception, you'd better teach the Boy Scouts to use some of those fancy knots on their d*cks," she said.

Watch Bee's commentary, as aired on Monday, below.