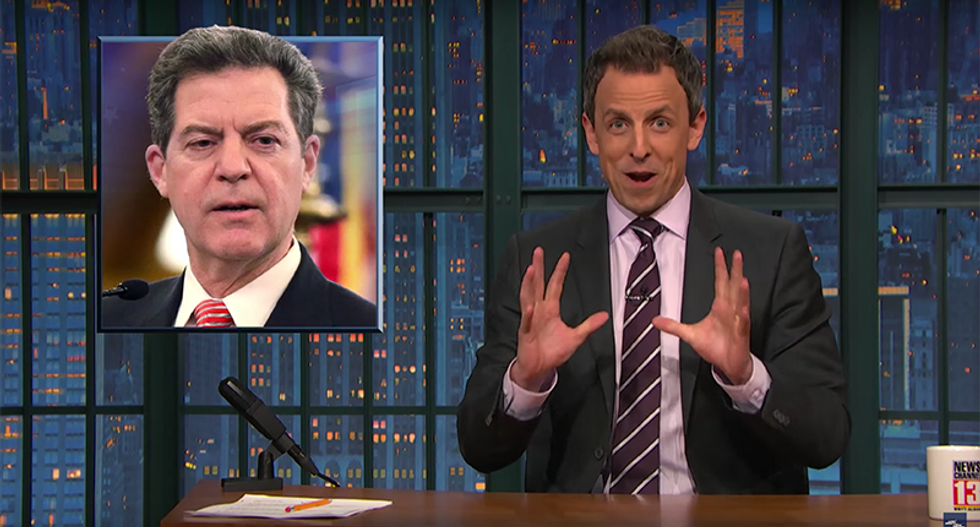 For years, Democrats have fought back against the idea that Reaganomics or 'trickle-down economics' works as an economic policy. Now, we're in a presidential election where Republicans are pitching the same policies that have proven to be unsuccessful. The difference, this time, is that we have actual proof of truly bankrupted economies when we look at what Gov. Sam Brownback did to Kansas and his followers are doing in other states like Oklahoma and Louisiana. Monday evening, "Late Night" host Seth Meyers used the opportunity to educate the country on what happened and why it's so messed up.

"In the last few years, Kansas has become somewhat of a laboratory for Conservative Gov. Sam Brownback who cut taxes for the wealthy and completely eliminated income taxes for small businesses. A plan he boldly described this way," Meyers said before playing a video of Brownback claiming you needed to get tax rates down while getting "social manipulation" out of it. He said at the time that we would all see how it worked in the "real-live experiment."

"'Real-live experiment' is a terrible sales pitch for something," Meyers said. "Those words usually only show up in shady classified ads." Still, Brownback got his tax cuts and his fully implemented economic policy thanks to a Republican legislature. Brownback claimed this plan was "designed to show the rest of the country that these policies could work on a national level." He even told the Wall Street Journal in 2013, "My focus is to create a red-state model that allows the Republican ticket to say, 'See we've got a different way, and it works.'" He also claimed it wold work fast calling it a "small business accelerator" where you literally remove all taxes to spur growth.

The problem, we now know, is that it didn't work. It failed so spectacularly that Kansas's economy was downgraded by the S&P. Supporters claimed the plan would generate $323 million in new revenue but it actually produced a $688 million loss. They're so desperate for cash they even auctioned off pornography and sex toys from a company that owed back taxes and whose property they seized.

Brownback claimed his "experiment" needed more time to work and, surprisingly, voters gave him that time. It still didn't work. It got worse. "So, surely, Brownback raised taxes to cover the shortfall," Meyers said logically. No. There will be no tax increases. Instead, Brownback decided to balance the budget on the backs of the state's children, slicing off $106 million in funding and moving $50 million from another fund that pays for Head Start and preschool. As for the job growth, Brownback set a goal of creating 25,000 jobs a year but that number looked more like 9,400 jobs. "And most of those jobs were packing and shipping those dildos," Meyers joked.

The sad thing is that most Kansas taxpayers don't even want the cuts Brownback made for their businesses. "Last week, the Topeka Capitol Journal reported business owners urged Kansas state House members to raise their own taxes. Asking to have the state raise your taxes is unheard of," Meyers said. "If even the small business owners of Kansas want their taxes raised, the results of the experiment are in. Republicans want to replicate these policies on a national level, but even when you buy couch cleaner they tell you to try it on a small patch of fabric first and that's what happened here. Kansas was the small patch of fabric and not only did the cleaner not work the couch exploded."