The science of bromance: Research suggests men should cuddle together more often 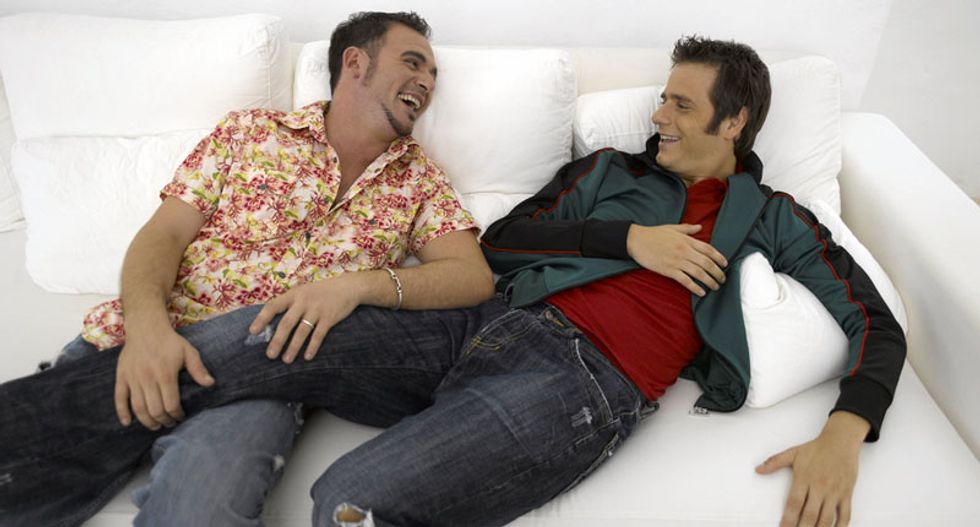 Two dudes get comfy on the couch (Shutterstock)

After a stressful day, some men find solace in a pitcher of beer and some mozzarella sticks; some, a few rounds of “Call of Duty," while others might go a few rounds with the heavy bag. A new study from UC Berkeley, however, suggests that another type of stress buster might be best: cuddling with a male friend.

While the study didn’t exactly prove that a spooning session is the true sign of a successful bromance, it did strengthen the idea that male friendships are an integral part of stress relief.

To conduct the experiment, a team of scientists at UC Berkeley took a group of male rats and had them live together for two weeks. Afterward, the rats were placed in a stressful situation which involved having them isolated in a confined environment for three hours. Post isolation, the rats returned to their cage and researchers noticed that not only did the rodents have an increase in oxytocin levels but they also became much more social, immediately snuggling and laying down beside one another.

The experiment suggests that stress can encourage people — men, specifically — to turn toward their friends when faced with challenges.”

Two weeks later, the researchers took the study a step further and deprived the rats of water for about 12 hours. Once the water was returned, the rodents were respectful of each other and shared sips. Another group of rats who hadn’t been exposed to the mild stressor, meanwhile, were aggressive and pushed and shoved each other to get to the water.

According to researcher and UC Berkeley graduate student Sandra Muroy in an interview with The Daily Californian, the experiment suggests that stress can encourage people — men, specifically — to turn toward their friends when faced with challenges, implying that a bit of tension doesn’t always have to be such a bad thing.

However, the rats only experienced an increase in oxytocin levels when they were placed in a stressful situation that was relatively mild. Another group of rats was also isolated in a confined space for three hours, but this time they were exposed to the scent of a predator via fox urine. After such extreme stress, the rats exhibited decreased oxytocin levels, and became more withdrawn from each other.

“Social interactions can buffer you against stress, but if a trauma is just too much and there is PTSD, you actually withdraw from social interactions that can be supportive for you,” researcher Daniela Kaufer, associate professor of biology at UC Berkeley, said in a press release.

So, maintaining successful bromances is important to overall health. And if you’re secure enough to cuddle a bit with your bud, well then more power to you.

This article was originally published by Van Winkle’s, vanwinkles.com, the editorial division of Casper Sleep