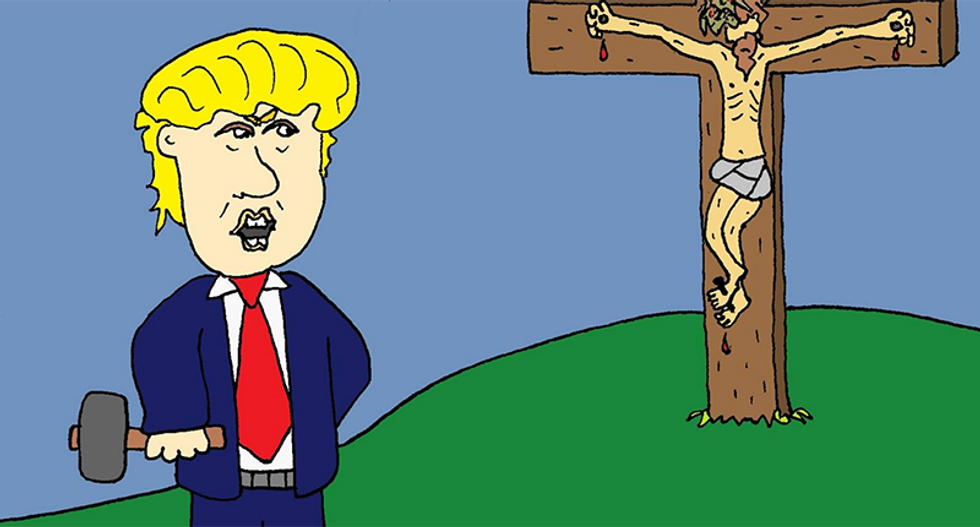 Much to the chagrin of GOP presidential candidate Ted Cruz, exit polls show that Donald Trump won the Evangelical vote in Tuesday's primary elections. That isn't dissuading one church from attacking Trump for his "unChristian" ways. The Community of Saint Luke near Auckland, New Zealand posted a cartoon on their Facebook page announcing the billboard that will remain up during the Easter holiday according to The Blaze.

The billboard shows Trump with a hammer in his clenched fist with Jesus Christ nailed to the cross behind him. "I don't like losers," Trump's speech bubble reads.

Minister Glynn Cardy said that the purpose of the billboard was to highlight Trump's name-calling and knack for racist and offensive comments and show religious followers that it isn't Christian behavior. “For those of us at St Luke’s, the cross is about politics," he was quoted saying in the Facebook post. "Jesus was killed – violently, publically and shamefully – because he spoke truth to power and confronted the leaders of his day about their treatment of the outcasts."

“To the Trumps of his day, and to those who see winners as having money and power, the Jesus of the Bible was a loser who associated with those rejected by society. And he died broke. Jesus had an alternative vision of reality, however. He was a person who sided with minorities and those who were most vulnerable, and it was this that got him killed.”

“I hope that voters in the US will see Trump’s message for what it is, and not make him a nominee for their highest office,” he continued, specifically citing Trump's attacks on Muslims, women and Mexican immigrants.

The billboard will remain through the Church’s Lenten and Easter season. Cardy says he’ll keep it up as long as Trump’s general election candidacy is undecided.

Posted by The Community of Saint Luke on Tuesday, March 8, 2016