'This election is gone': Focus group finds angry voters are now angry at the angry voters 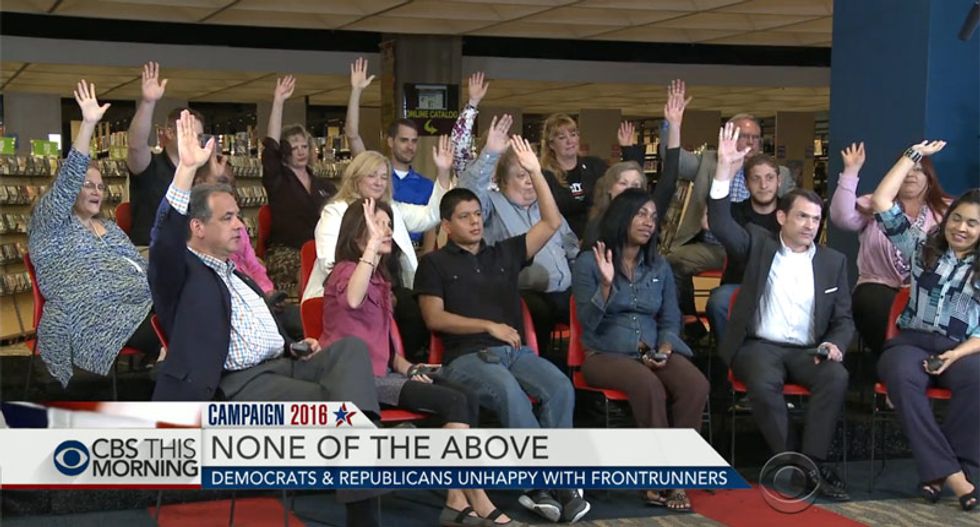 If the rise of Donald Trump is a reaction by angry voters against the political establishment — then what happens when other voters get angry at having to choose between Trump and Hillary Clinton?

CBS News featured Republican pollster Frank Luntz running one of his TV focus groups, with a group of voters in Orlando, Florida, who have declared themselves to be for none of the above.

In this past week's Florida primary, both Donald Trump and Hillary Clinton won their respective primaries by huge margins both statewide and in Orlando's own Orange County -- but these focus group participants were not on board.

"Who's mad as hell?" Luntz asked the focus group, in a clear reference to the famous movie Network — to which all of them raised their hands.

One woman, however, had to clarify her feelings a bit: "But I'm mad at the voters. I'm not mad at the candidates. People are voting for them. And I'm angry for people that settle for sound bites for their information."

One man explained: "I don't believe Donald Trump or Hillary Clinton really care about the American people. I don't trust either of them. I don't think they are presidential."

"There is a great opportunity for someone," another woman said. "And that person had better come forward fast, because if the Republicans put Donald Trump up, and if the Democrats put Hillary Clinton, it will be the worst turnout election ever."

At the end of the segment, Luntz explained what each candidate has to do: Clinton, he said, needs to "come clean" from the political script, "and just show your heart, and show some authenticity, because that's what they're mad about — is that they don't believe her."

As for what Trump has to do, Luntz offered this insight, with a bit of self-deprecating humor: "He absolutely has to show humility — although he's as likely to do that as I am to pass up a buffet."