Trevor Noah: 'I hope there are two Donald Trumps -- that way he can go f*ck himself' 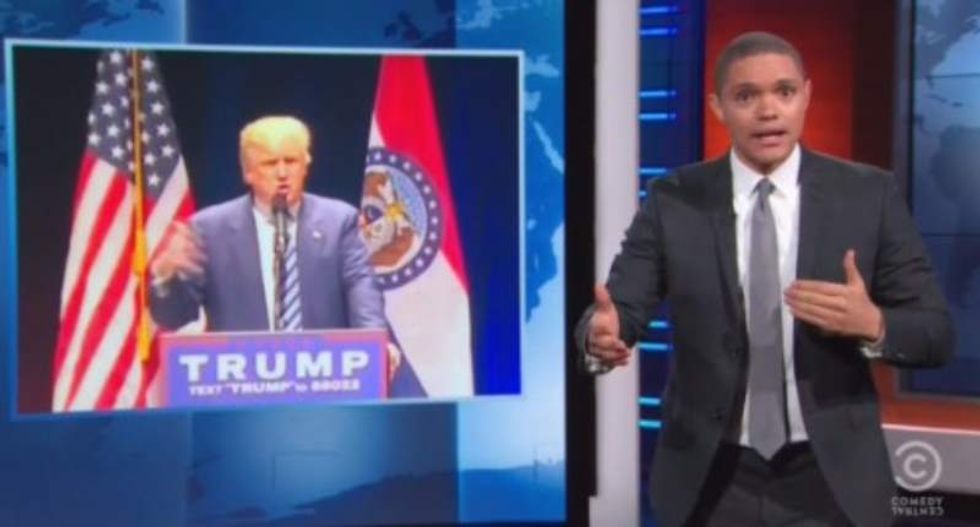 Daily Show host Trevor Noah didn't buy Ben Carson's claim on Monday that there were "two Donald Trumps" -- the one publicly calling for mass deportations and encouraging fans to punch protesters and a more thoughtful one the public does not get to see.

"We laugh, but it's still more likely there’s only one Donald Trump, who is just a cynical, manipulating man, manipulating his followers and his enemies and the media without any concern for what he’s doing to the country," Noah said. "That's possible. That's probably the truth. But I do hope -- I do hope -- that there are two Donald Trumps. Because that way he could go f*ck himself."

The chaos surrounding Trump's rallies this past weekend, Noah said, provided the first authentic glimpse into a future with him as president, and it scared him.

"Here's the truth: Donald Trump didn't just create an atmosphere for violence at his rallies," the host argued. "He engineered it as carefully and deliberately as Matt Damon did when he was growing potatoes on Mars."

While he was alarmed by the Republican front-runner's complaints that "nobody wants to hurt each other anymore," Noah was also dismayed to find out that some of the demonstrators identified themselves as supporters of Sen. Bernie Sanders (I-VT).

"Trust Bernie Sanders fans to have an unrealistic view of what's actually happening," Noah groused, before saying that while he was happy to see them taking action and not "just hashtagging their feelings," that they were contributing to Trump's argument painting his supporters as being under siege by "the nefarious, politically-correct left liberal force."

"If you come in, and you actually try to silence them, it's like trying to put a fire out by putting wood onto it," Noah said. "You've given Trump the villain that, up until now, he was making up."