Trump ally Roger Stone: Cruz's alleged mistresses are so ugly 'he's the one copulating with rodents' 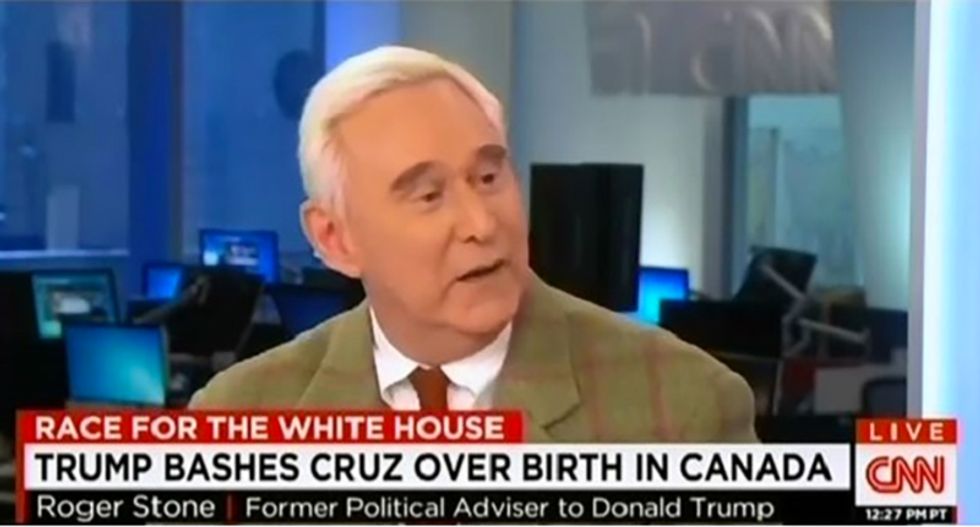 Donald Trump's BFF Roger Stone knows that Donald Trump couldn't possibly be behind the Ted Cruz sex scandal story the National Enquirer reported this week. DTrump told ABC's This Week on Sunday that it was not him behind the story saying, "I have no control over the National Enquirer." Stone echoed the same sentiment on AM970 where he told host Frank Morano that by definition he couldn't be one of Trump's henchmen because he's not being paid. Cruz not only blamed Trump and Stone but he also accused Stone of being someone who copulates with rodents. "Knowing what a couple of these women look like," Stone continued, "I actually feel like he's the one who has been copulating with rodents."

Some have questioned if Ted Cruz will sue the National Enquirer for the story, but Stone claims that Cruz won't because he can't. "Again, why won’t he sue. It won’t cost him anything, he’s a lawyer himself...To be absolutely clear, Ted Cruz won’t sue because the allegations are largely true. That’s why he won’t sue."

Cruz has gone after Trump on both Facebook and Twitter attempting to tie the scandal to Trump, but as The Daily Beast reported, many unnamed sources who were fed the Cruz sex scandal allege that they received the information from people aligned with Marco Rubio's campaign. While Trump did tweet a threat to Cruz after Cruz's super PAC released revealing photos of Trump's wife and the National Enquirer story broke the following day, Stone says it's all just a coincidence.

"This scandal doesn't pertain to Heidi," Stone says referring to Trump's tweet that he would "spill the beans on [Cruz's] wife." "I presume that Trump is talking about Heidi's mental breakdown and the fact that she was found by the local police wandering and disoriented and they determined she was a threat to herself. Or maybe they're talking about the fact that Heidi with her husband posing as a conservative Republican was the top aide to Condoleezza Rice at the National Security Council prior to going to the U.S. Trade Representative Office where she was the top aide for Robert Zellick who then took her to Goldman Sachs. Do you know who they are Frank? They're the bank that you and I bailed out. Of course Goldman then subsequently gave a million dollar legal sweetheart loan to Ted Cruz's Senate campaign, which he lied about, claiming the infusion in cash to his campaign came from his wife cashing in her retirement. That's a lie. Now all of that pertains to Heidi. None of this," Stone said meaning the sex scandal," pertains to Heidi. It has to do with Ted Cruz and his zipper."

Earlier this week, CNN took a big step against Stone's brand of politics by pledging never again to have him on one of their shows. The media watchdog group Media Matters heralded the decision releasing a statement saying, "In a campaign season that has been marked with bigoted rhetoric from GOP candidates, it was startling to see that Stone -- a close ally of Donald Trump -- had become a favorite guest in mainstream media. As Media Matters continues its campaign to highlight the worst of Roger Stone's history, we encourage other networks to follow suit and agree to keep this notoriously controversial figure off of their airwaves moving forward."

Stone is the only named source who spoke on the National Enquirer in the Cruz sex scandal story.

Listen to Stone's full interview below: