Trump to Cruz: I didn't plant 'Enquirer' affair story on you — but they've been right before 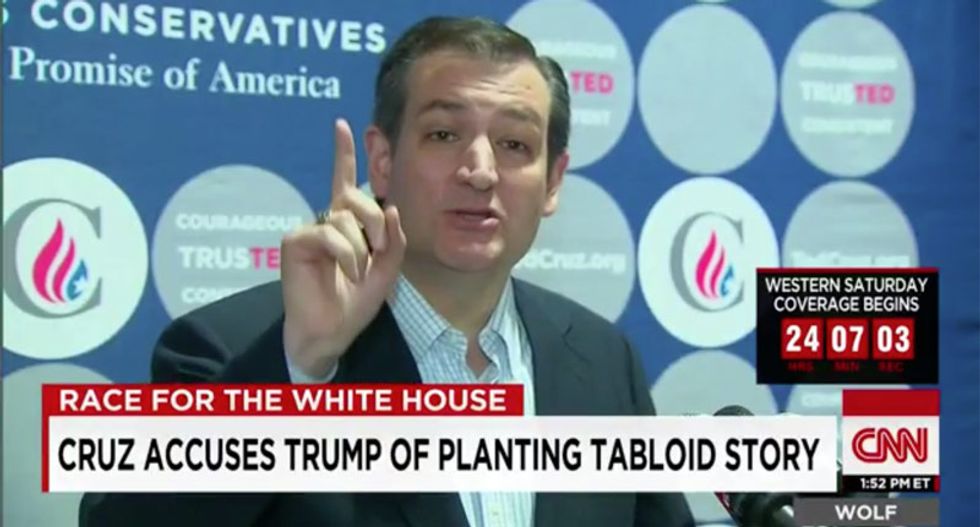 Ted Cruz tore into Donald Trump on Friday, in the wake of a National Enquirer story that alleged Cruz had engaged in multiple extra-marital affairs.

Meanwhile, Trump is denying any knowledge of the Enquirer's report — but also saying that hey, they're a good paper at this sort of thing.

"Let me be clear: This National Enquirer story is garbage," Cruz said at a campaign stop in Wisconsin. "It is complete and utter lies. It is a tabloid smear. And it is a smear that has come from Donald Trump and his henchmen. It is attacking my family."

Ted Cruz: “This National Enquirer story is garbage. It is complete and utter lies.” https://t.co/6OZtrfIwim https://t.co/pp651AMCCK

Cruz also singled out the one source who was named on the record in the Enquirer story, Trump adviser and longtime political operative Roger Stone.

"And I would note that Mr. Stone is a man who has 50 years of dirty tricks behind him — he's a man for whom a term was coined for copulating with a rodent," Cruz said. "Well, let me be clear: Donald Trump may be a rat, but I have no desire to copulate with him."

(Note: The term "ratf*cking" was brought into political nomenclature by the dirty tricksters on President Richard Nixon's re-election team. And while Roger Stone was indeed part of that crew, the term was not invented just for him — it actually began with Nixon operatives Donald Segretti and Dwight Chapin.)

Cruz also singled out the National Enquirer's CEO, David Pecker, who is a longtime friend and ally of Trump, and noted that the paper itself has endorsed Trump, as an argument that Trump himself would be behind the publication of the story.

Cruz also made a clear reference to Trump's own serial infidelity: "There's a phenomenon in psychiatry, known as 'projection.' Donald Trump will soon be the textbook entry for that phenomenon."

A reporter asked Cruz whether he would support Trump as the Republican nominee — a question that Cruz seemed to dodge the day before, even as he was calling Trump "a sniveling coward" and telling him to "leave Heidi the hell alone."

"Donald Trump’s consistently disgraceful behavior is beneath the office we are seeking and we are not going to follow."

For his own part, Trump has put out his own statement on Facebook.

"I have no idea whether or not the cover story about Ted Cruz in this week’s issue of the National Enquirer is true or not, but I had absolutely nothing to do with it, did not know about it, and have not, as yet, read it," Trump wrote.

"Likewise, I have nothing to do with the National Enquirer and unlike Lyin’ Ted Cruz I do not surround myself with political hacks and henchman (sic) and then pretend total innocence," he continued. "Ted Cruz’s problem with the National Enquirer is his and his alone, and while they were right about O.J. Simpson, John Edwards, and many others, I certainly hope they are not right about Lyin’ Ted Cruz.

"I look forward to spending the week in Wisconsin, winning the Republican nomination and ultimately the Presidency in order to Make America Great Again."

And now Cruz's campaign is trying to counter the "Lyin' Ted" nickname with a term that Cruz himself sought to push out at his press conference: "Sleazy Donald."

Here is a tweet from Cruz's campaign manager, officially using the term — and adding that Trump isn't just sleazy, he might be mentally ill, too.