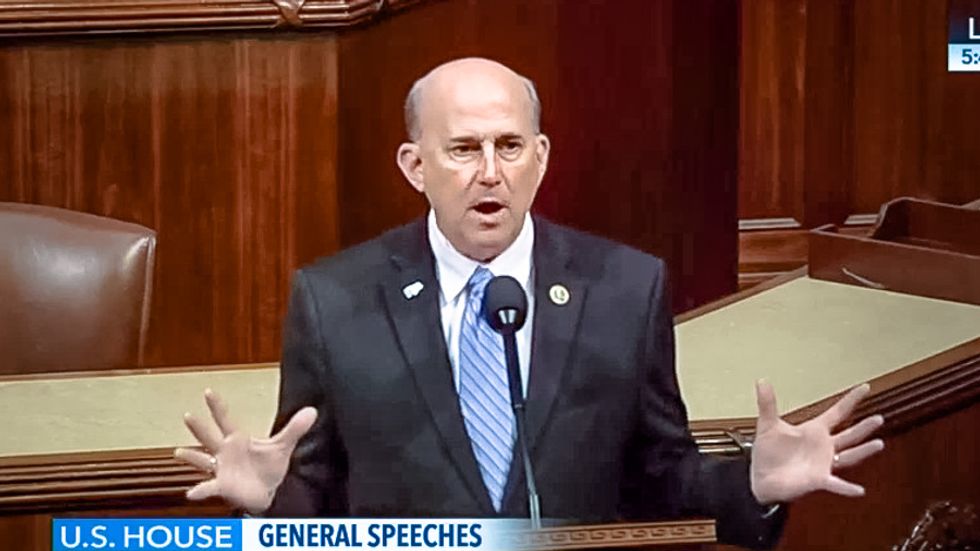 U.S. Rep. Louie Gohmert (R-TX) explained on Tuesday that he and other Republicans had voted against a bill to promote the recruitment of women scientists because it discriminated "based on gender."

In a 383-4 vote on Tuesday, a bill authorizing the National Science Foundation to use its entrepreneurial programs to recruit women sailed through the House. Later in the afternoon, Gohmert took to the House floor to defend himself and the three other Republicans -- Reps. Justin Amash (R-MI), Glenn Grothman (R-WI) and Thomas Massie (R-KY) -- who voted against the bill.

Gohmert acknowledged that the bill was "well intentioned," but said that "this program is designed to discriminate against that young, poverty-stricken boy and to encourage the girl. Forget the boy. Encourage the girl."

"It just seems that, if we are ever going to get to the dream of Martin Luther King, Jr., that he spoke just down the Mall, he wanted people to be judged by the content of their character and not by the color of their skin," the Texas Republican opined. "I know after race has been an issue that needed attention, then gender appropriately got attention."

But Gohmert argued that "those things are not supposed to matter."

"It just seems like, when we come in and we say that it is important that for a while we discriminate, we end up getting behind," he continued. "And then probably 25 years from now boys are going to have fallen behind in numbers, and then we are going to need to come in and say: Actually, when we passed that bill forcing encouragement of girls and not encouraging of little boys, we were getting behind the eight ball. We didn't see that we were going to be leaving little boys in the ditch, and now we need to start doing programs to encourage little boys."

According to the lawmaker, the bill passed on Tuesday would have derailed the Madame Curie's research, putting "millions and millions of lives" in jeopardy.

"I thank God that there wasn't a program like this that distracted her," Gohmert said. "But according to the bill that we passed today, we are requiring the Science Foundation to encourage entrepreneurial programs to recruit and support women to extend their focus beyond the laboratory and into the commercial world. Thank God that is not what Madame Curie did."

Gohmert, Amash and Massie also voted against a second bill that would encourage mentorship programs between scientists and female K-12 students. That bill passed 380-3.