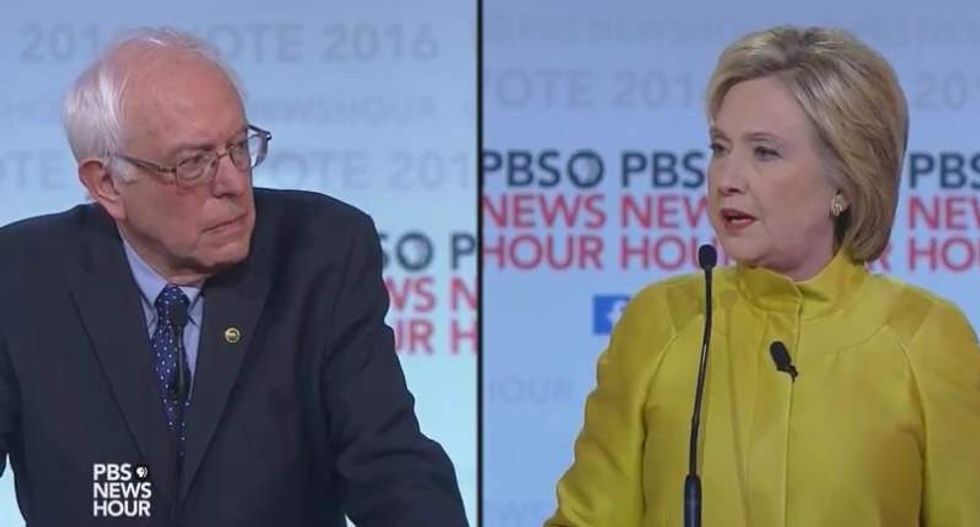 By Scott Bixby and Amber Jamieson, The Guardian

Hillary Clinton, on Bernie Sanders as a potential vice president: "Oh, let’s not talk about that now! [laughs] I don’t want to think any further than tomorrow and the Michigan primary!"

“It’s great that both of us are bringing a lot of people into the process, and I applaud senator Sanders for really getting a very big turnout among young people - I love to see that,” Clinton says. “You may not be for me now, but I am for you regardless, and I am going to continue to try to help young people.”

“A lot of young people... are saying, what is going on?” Clinton says. “They get out of the great recession and into the job market, and there are no jobs! I don’t blame them for being really disturbed by what’s going on in our country - that’s why I’m not overpromising.”

On her support for her husband’s 1994 crime bill that is seen as having exacerbated incarceration rates in the US, Hillary Clinton says that the “school-to-prison pipeline” needs to be replaced.

“There was a very serious crime challenge, even an epidemic, in a lot of communities in our country at that time,” Clitnon says, citing the “positive things” in the bill as part of her support. “But as my husband said last summer at the NAACP, there were problems that were solved, but there were mistakes made in that bill.”

“It set off a chain reaction where more and more people ended up being cincarcerated who, in my opinion, should not have been,” Clinton says. “We have got to remove the school to prison pipeline and replace it with a cradle-to-college pipeline.”

Hillary Clinton, on her favorite Republican: "I have good relations with a lot of Republicans - I hesitate to mention any more names, because it will hurt them ..."

First question from Douglas, a vice president of donor relations for the United Way: “How do you anticipate getting anything done in Washington when ‘compromise’ is a dirty word?”

After citing her service as first lady and assistance in passing health care for low-income children and foster system reform, Clinton says “I’m not saying this is easy... but you have to work at it every single day.”

“When I’m not running for something, the Republicans say really nice things about me,” Clinton jokes. “Our founders created a system where they made clear no human being has all the answers - you have to work together.”

“Compromise is not a dirty word - it’s how democracy has to work.”

Bret Baier asks Hillary Clinton if she thinks “a child should have any legal rights or protections before it’s born?”

“It’s not much of a ‘right’ if it’s totally limited and constrained,” Clinton says of the right to abortion. “I have been on record in favor of a late-pregnancy regulation that would have exceptions for the life and health of the mother. I object to the recent effort in Congress to pass a law saying after 20 weeks, no suck exceptions, because although these are rare, Bret, they sometimes arise in the most complex situations.”

“It is appropriate to say” that abortion can be restricted in these circumstances, Clinton says, “so long as there’s an exception for the life and health of the mother.”

“I have the greatest respect for Mike Bloomberg, we worked together during the eight years I was in the senate,” Clinton says. “I look forward to continuing to work with him and finding ways that he can show leadership, which he has done so well over the years.”

Bernie Sanders, on potentially serving as Hillary Clinton’s vice president: "We are running this campaign to win, to become president of the United States."

“In the wealthiest country in the history of the world, we should not be having a Flint, Michigan. That is beyond disgraceful,” Bernie Sanders says, of decaying infrastructure and the water crisis in the city.

“What I have proposed is to spend a trillion dollars over a five-year period to make sure that states and cities throughout this country have the resources they need to repair our failing infrastructure.”

“I have worked with Republicans where there has been common ground for many many years,” Sanders says, citing his experience chairing the veterans affairs committee in the US senate. “At the end of the day, you’ve got a Congress today where too many members are worried about securing large campaign contributions from very, very wealthy people.”

“What we need are millions of people - many of whom have given up on the political process in disgust,” Sanders continues. “We need them to come together to demand that we have a government in this country that represents all of us.”

Bret Baier asks Bernie Sanders if there is “a single circumstance in which you would be okay” with abortion being illegal.

“It’s not a question of me being ‘okay,’” Sanders says. “I happen to believe that it is wrong for the gvt to be telling a woman what to do with her own body.”

“There are a whole lot of people out there who tell me that government is terrible,” Sanders says, “but somehow on this issue they want to tell every woman in America what to do with their body.”

The first question from the audience addressed to Bernie Sanders comes from Detroit resident Clark, who asks the Vermont senator how he will address the crisis in the Middle East wrought by the rise of the Islamic State.

“How do we do it most effectively? One of the differences between secretary Clinton and myself is that I voted against the war in Iraq, she voted for the war in Iraq,” Sanders says, saying that many of the issues currently facing the region is the result of Clinton’s “disastrous decision.”

“The lesson that I have learned from the war in Iraq is that the United States cannot and should not do it alone,” Sanders says. “They are the ones on the ground that are gonna have to destroy ISIS.”

On the potential for a “debt crisis,” Bernie Sanders says that his plan for the expansion of social services will be paid for in total by his planned expansion of tax revenue. After declaring that every American is entitled to healthcare coverage, host Bret Baier interrupts Sanders.

“Where did that right come from, in your mind? Baier asks.

“Being a human being,” Sanders says.

It’s “bad idea for American democracy” that the only the very wealthy can run for president, Bernie Sanders says of billionaire New York mayor Michael Bloomberg’s decision not to run for the White House.

Broadcasting live from downtown Detroit, Fox News is hosting a forum for both Democratic candidates for their party’s presidential nomination on the eve of the Michigan primary, after initially announcing that Vermont senator Bernie Sanders would be attending alone.

Sanders is the first candidate onstage - we’ll be following his remarks live.

Watch the event, as aired on Monday, below.