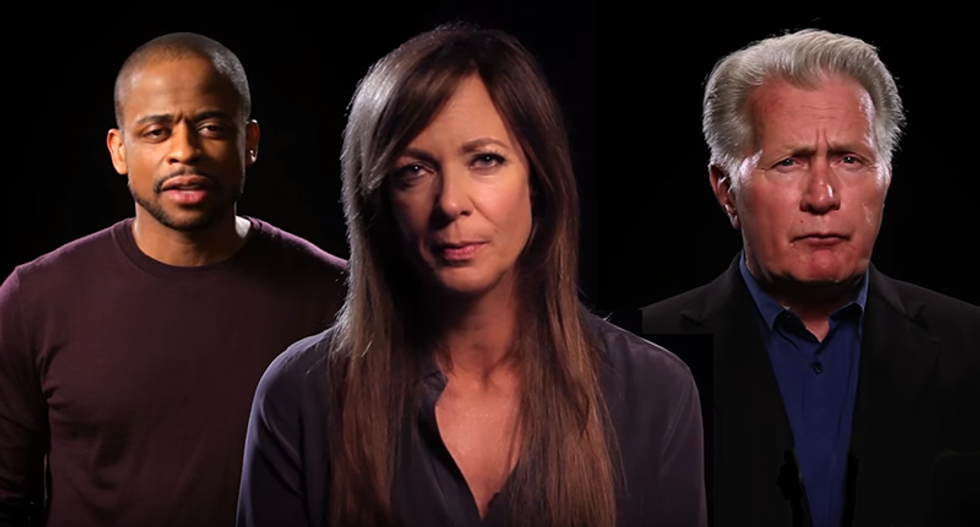 “There is a price you pay when you go to war,” Staff Sergeant Tommy Rieman explained in a press conference.  “I thought I was living the life, but deep down inside I was empty.  I had nothing.  And it’s because I never addressed these issues.” In 2014, Rieman and fellow veteran Marine Nicholas Stefanovic told their stories to the press before a benefit concert for Justice For Vets, an organization that advocates for Veterans Treatment Courts.

Using this court model ensures that veterans in legal trouble attend regular court appearances and mandatory treatment sessions as well as frequent and random testing for substance use (drug and/or alcohol). The goal is to help veterans suffering the after-effects of war to stop self-medicating and get the help they need. The program has been successful time and time again with both Rieman and Stefanovic as evidence as fortunate survivors of substance abuse and suicide.

Several years ago, Rieman was heralded as a national hero for outstanding acts of bravery. During an ambush, he literally used his own body to shield his fellow soldier operating the weaponry. It earned him a standing ovation during the State of the Union Address, the Silver Star and Purple Heart, but inside was suffering. He attempted suicide and while he survived, he began using drugs and alcohol. "That was all I had.  That was the only relief I had,” he described.

Every day 22 veterans commit suicide. After their service, it is estimated that 76 percent of homeless veterans suffer from a substance abuse or mental health disorder. All of these issues the Veterans Treatment Court works to address to give veterans another opportunity.

"I would never have addressed all the issues I faced if it wasn’t for the Veterans Treatment Court," Rieman explained.  "The greatest thing I can do at this point is I am still living for a reason, I’m still living for a purpose. And that purpose is to continue to help those veterans to the left and to the right of me.  No matter what.”

Stefanovic is one of many veterans who had a hard time adjusting to civilian life after he came home from the war. His final tour in a remote area of Afghanistan was too much for him, and after he came home things were different. “I quickly learned that I returned home alone," he said in the press conference. "The family I had when I was in the Marine Corps … they were there… but they were not there. Because of the way that war changed me, it cut off all of the relationships I had.”

Like the 1 in 10 soldiers returning from Iraq and Afghanistan, Stefanovic began to self-medicate with drugs but his were more severe opiates, either prescription pills or heroin. It wasn’t long before he was homeless and began having legal trouble.

“People don’t use these substances for no reason,” Nick told CNN for their documentary "Deadly Fix." “It becomes a matter of controlling the pain.”

Thankfully, his story is a fortunate one. One of the first Veterans Treatment Courts was in his hometown, Rochester, New York. When a judge put the stories of his service and his addiction together, Nick had the option to go to jail or the Veterans Treatment Court. It ultimately saved his life while turning his experience into a way he could help fellow soldiers.

As an organization, Justice for Vets works to expand the availability of life-saving options for our returning heroes and the cast of "The West Wing" joined this week to launch a public service announcement to advocate for the work. Former cast member Melissa Fitzgerald now serves as Senior Director of Justice For Vets, and was able to corral Allison Janney, Dulé Hill, Martin Sheen, Bradley Whitford, Richard Schiff, Janel Moloney and Mary McCormack for the three-minute video.

“It is an honor to be here in support of our veterans who sacrificed so much for all of us. And I am thrilled to support my friend Melissa Fitzgerald and Justice For Vets, an organization that provides such critical care to our veterans when they have difficulties transitioning home,” said award-winning actress Allison Janney who starred for seven seasons on “The West Wing.”

The organization is working to expand the 220 Veterans Treatment Courts to cover all 50 states and 21.8 million veterans to help keep them in treatment and out of jails.

"Partnering with judges and courts that want to identify Veteran defendants and get them connected to needed VA treatment is how we best serve them," said Secretary of Veterans Affairs Robert A. McDonald. "‎These programs are a perfect example of communities coming together to serve Veterans in a holistic way with VA care as a vital component. If we are going to serve Veterans - all of them who have put so much on the line for all of us - then we're going to work together to see that they have the best services and health care available."

Army veteran and Harris County, Texas District Court judge Marc Carter joined Sec. McDonald on a panel this afternoon to promote the PSA. He explained that seeing veterans caught in the system instead of getting treatment led him to create the first Veterans Treatment Court in Texas. "By creating Veterans Treatment Courts and partnering with our local VA Medical Center, we are able to serve a large population of veterans and connect them to the appropriate treatment and benefits.”

“The hardest part of serving in the military should not be coming home—we owe our fighting men and women more than that,” said Dee Dee Myers, who served as a story consultant on “The West Wing" after working as President Bill Clinton's press secretary. “We owe them a real shot at a good life – and the services and support they need to realize that simple dream. That’s what Veterans Treatment Courts are all about.”