'Who needs algebra?': Fox News panel debates whether math should be required in school 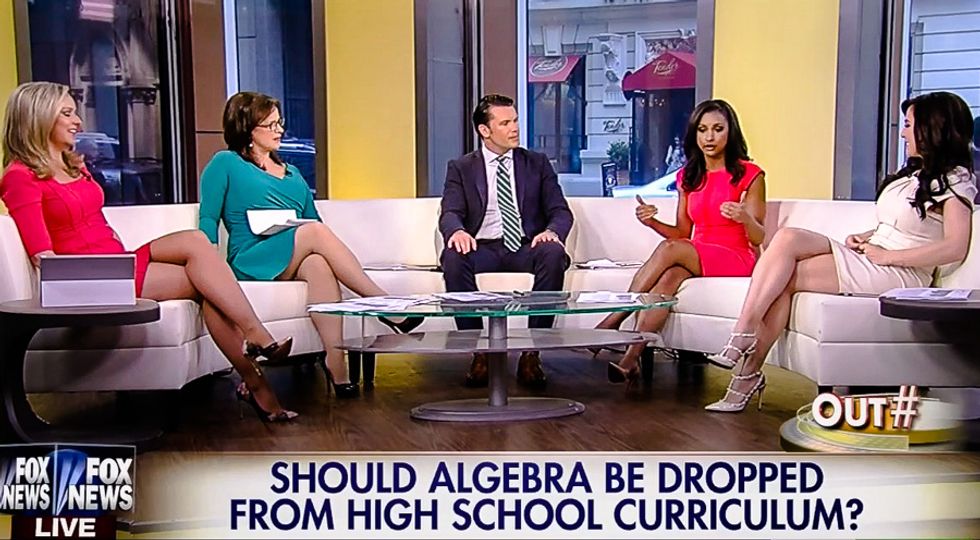 A panel of Fox News hosts speculated on Wednesday that children in the U.S. might be better off if algebra requirements were eliminated in public schools.

After a professor at Queens College in New York made the case in a new book that the U.S. had one of the worst graduation rates in the developed world because students were failing at math, Fox News host Pete Hegseth noted that many were asking the question: "Who needs algebra?"

"Is this a war on math?" Hegseth asked co-host Andrea Tantaros, who revealed that she had flunked Algebra I.

"I whole-heartedly agree with this professor," Tantaros replied. "I struggled. I had honors English, but in math I needed a little bit of help... I said, 'Please could I drop out.' But I actually took Algebra I twice and barely passed Algebra II."

Instead of dropping out, Tantaros said that she was able to convince the school to make a special exception to exempt her from advanced math courses.

"I think that if you're not good at math, you take the basic courses," she said.

However, co-host Sandra Smith disagreed: "It just takes time, and I've never met a teacher that wasn't willing to help someone more."

Hegseth, who said he sent his children to a private Christian school, attributed the problem to the "mumbo jumbo" in Common Core standards.

"They are setting them up to fail," Hegseth declared. "And then we're lowering the standards and we're trapping kids in failing schools."

Although Eboni Williams insisted that the "reasoning and logic" behind advanced math was an important life skill, Tantaros was not convinced.

"The next time I'm in a Bloomingdales and I have a certain amount of money to spend and I'm trying to figure out how many pairs of shoes can fit in x amount of closet space, I'll text you," she joked. "I have one mathematical [equation] that I apply. If I like it, I buy it."