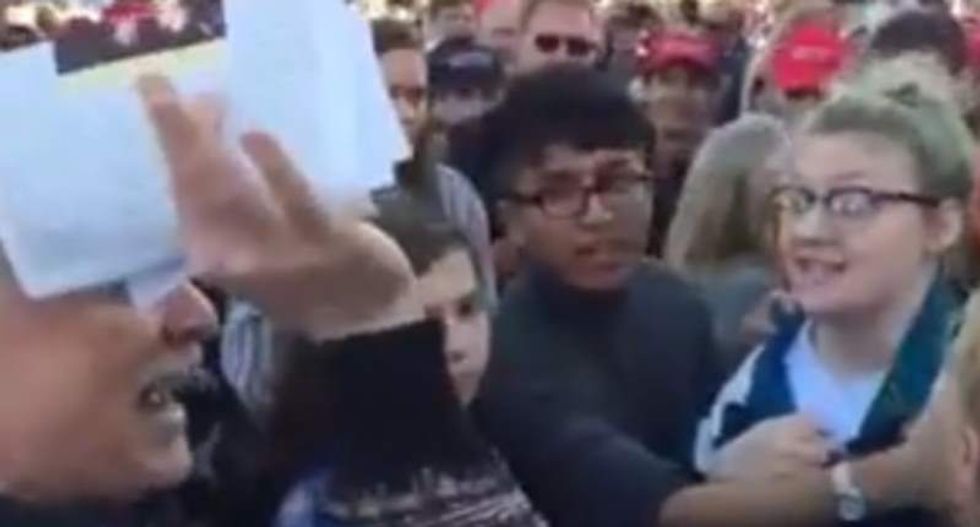 An unidentified woman is seen arguing with a man outside a Donald Trump rally in Janesville, Wisconsin on March 29, 2016. (YouTube)

A teen was hit with pepper spray while protesting outside a Donald Trump campaign rally in Janesville, Wisconsin.

Footage of the incident shows the teen, identified by WFTV-TV as Alex Drake, arguing with an unidentified man, telling him, "You touched my breasts," as a woman stands behind her holding a Black Lives Matter sign.

The man puts his hands up and denies groping Drake, but she repeats, "You touched my chest" and approaches him, prompting other people to grab her by the shoulders.

Drake is then seen telling someone else, "Stop f*cking touching me" before swinging toward the man. A hand is then seen reaching toward her and spraying her in the face, causing her to walk away amid the cheers of Trump supporters.

The New York Daily News and other outlets initially described Drake as being 15 years old. But WISC-TV later reported that, according to local police, she is actually 19 years old.

Police Chief David J. Moore said the incident happened before Trump took the stage at the rally, and that there is "likely good photographic evidence" showing both who sprayed Drake and who groped her.

Watch footage of the encounter, as posted online, below.