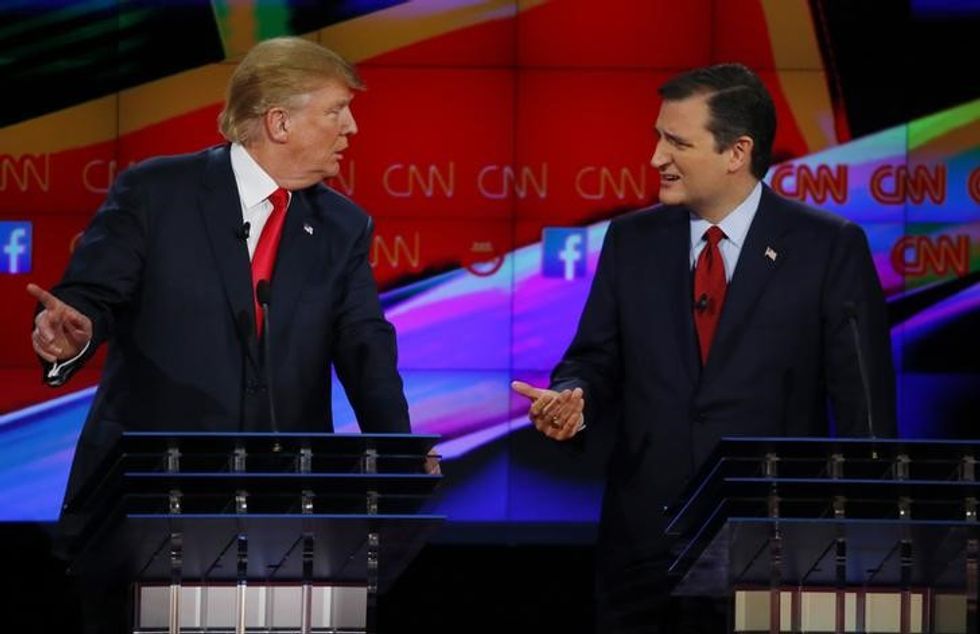 I’ve been keeping a list, as this election season shambles toward its climax, of things that might mount a more dignified, qualified, intellectually rigorous fight for the presidency of the US than our two Republican frontrunners, Ted Cruz and Donald Trump. At this point, I have:

• Two baby bears who ate too much honey and are all tuckered out.

• A melting butter sculpture of a lizard and a dried apricot that fell on the barbershop floor.

• A wet paper towel with low self-esteem and a lamprey that did too much cocaine and thinks it can “destroy Isis”.

• A bar of soap with a hair on it and my grandma, who is dead.

It’s difficult to understand how any American human being with a healthy sense of self-preservation would voluntarily place their nation, their body, and their livelihood in the hands of either of these incompetent, bleating clowns; never more so than after this week’s demonstration of how the two noble statesmen plan to comport themselves during their battle for the nomination and the presidency beyond – that plan being, apparently, to reduce the future of my country (and the world) to a hottest wife contest.

It all started when, in the hope of swaying religious voters whose fear of women’s sexual autonomy outweighs their love of xenophobic wall-themed frottage, an anti-Trump rightwing super PAC circulated a nude photo of former model Melania Trump, implying that she wasn’t the “right” kind of woman to occupy the White House. (It’s a well-known fact that none of our previous 43 first ladies have possessed genitals.) Trump, claiming that the ad was orchestrated by Cruz, shot back with a tweet that I’m pretty sure he copied verbatim from a collection of FDR’s fireside chats:

Cruz, apparently dreading the exposure of his wife’s mysterious beans, attempted to calm the situation:

But Trump, undeterred, then retweeted an image posted by one of his followers – an unflattering photo of Heidi Cruz side by side with a dolled‑up beauty shot of Melania, with the caption: “No need to ‘spill the beans.’ The images are worth a thousand words.”

Finally, sensing an opportunity to slime his way to the high ground, Cruz responded: “Donald, real men don’t attack women. Your wife is lovely, and Heidi is the love of my life.”

(Reminder: statistically, a child dies by gun violence in the US every other day , which means that we lost at least two while these adult males who think they deserve to be in charge of a country were having an internet slap-fight about their girlfriends’ butts.)

Setting aside the notion that a woman’s looks determine her value, as well as the dehumanising reduction of Heidi Cruz and Melania Trump (two successful, professional women with fully formed, complex lives) to inanimate chips in a dick-swinging contest, the most odious thing about this whole exchange is that it positions Ted Cruz as the good guy when it comes to gender.

Cruz is a man who believes that “every human life is a precious gift from God, which should be protected from the moment of conception until the moment of natural death” – in other words, all pregnant people should be treated as incubators and forced to give birth. He supports a federal ban on abortion after 20 weeks, without exception. Are you a woman with a wanted pregnancy who found out at 21 weeks that your foetus is not viable? Sorry! Carry it inside of you for four more months because Ted Cruz says so! Are you a developmentally disabled 11-year-old girl who was raped by your father and no one discovered it until you were six months along? Hope you survive pregnancy so you can claim your gift from God!

While it likes to pride itself as a paragon of impartiality, the Supreme Court, now stacked with a strong conservative majority that is willing to legislate from the bench, is sliding into a crisis of credibility. Public approval of the court has plummeted by 15% over the past three years, while nearly two-thirds of Americans believe that the Supreme Court is primarily motivated by politics.

Much of this crisis is informed by the body's confirmation process, which has in recent years become an open invitation for partisan histrionics of all kinds. The GOP's theatricality was center stage, for instance, during the confirmation hearings of Justice Ketanji Brown Jackson, who they subjected to a medley of bad-faith questions like, "Can you provide a definition for the word 'woman'?" and "Do you agree with this book that is being taught to kids that babies are racist?"