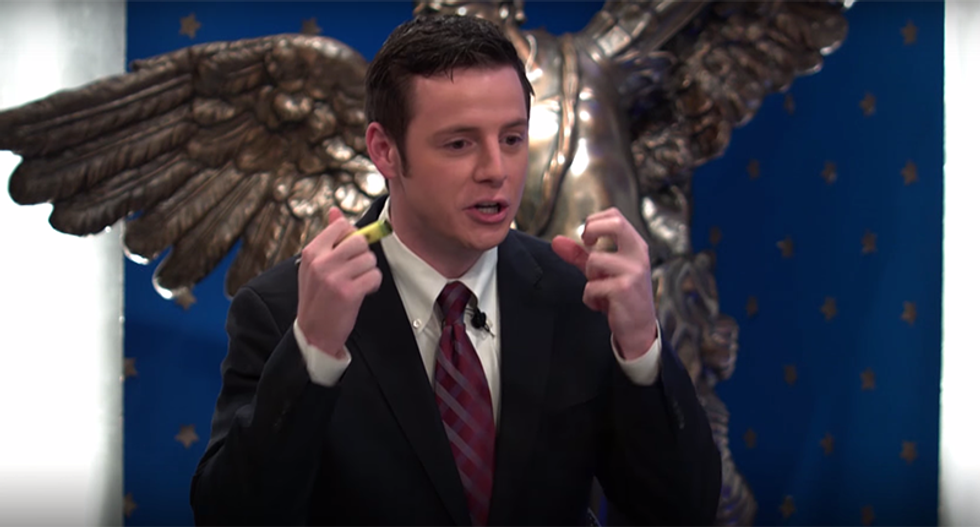 The Church Militant  has posted a new video in which he thanks God for giving his mother stomach cancer and dying so that he would be brought back to the Catholic Church. Michael Voris, president and founder of St. Michael's Media and producer of the website Church Militant, took to YouTube to reveal details of the sinful life he lived prior to his "reversion" to Catholicism.

He was posting the video now, he said, because there were forces seeking to "publicly discredit me, the apostalate, and my work here." He says that he had always publicly spoken of his life prior to his reversion as a time in which he was living in "mortal sin." He just hadn't thought that "a full public confession of details was necessary."

Voris is not outing himself as a gay man. He denies being gay. He does say, however, that "..most of my thirties, confused about my own sexuality, I lived a life of live-in relationships with homosexual men." And he is aware of how that looks. "From the oustide, I lived the lifestyle and contributed to the scandal in addition to the sexual sins. On the inside, I was deeply conflicted about all of it." He says that in his twenties, he slept with both men and women.

He now abhors all of that behavior, which he says was about "seeking solace in lust and surrendering my masculinity." While Voris seems confused about the relationship between sexuality and gender, he is positive that it was his mother who became the instrument of God's grace.

"As a last resort, she prayed to be given whatever suffering so that I would be granted sufficient grace to revert." And, shortly after her prayers, she received an early diagnosis of stomach cancer, which killed her a few years later. It was while watching his mother suffer through her last year of life that Voris began to change his life, but it was her death that made the miracle happen.

"I pledged at her coffin that I would change. I said, 'Mom, what you went through for me, you will not have gone through in vain.' I returned fully and completely to the faith." Two years later, he says, he founded the apostolate that he is now trying to save.

Voris has more to say, however, about how wonderful it was that his mother got cancer. "I was thrilled, over the top with gratitude, with what God had done for me through my mom and her suffering."

How evil was Voris prior to his mother's death? He explains a couple of times that things were so bad that if he had been killed in a car accident at the time of his co-habiting with homosexual men that he would have been damned. In fact, he "shudders" every time he thinks about just how bad he used to be.

"I gave up my self, my masculinity, my self-understanding, my identity and my own dignity as a baptized Catholic."

Voris isn't certain that all of his followers are going to understand about his failure to disclose the nature of his previous sins. He offers the by-now standard apology that he wants to apologize to "anyone who was wounded in any way." But he never intended to deceive anyone. He was just so eager to "experience the joy and life-giving truth of the Catholic Church."

Voris says that being rescued is proof that God can do all things. He can even "restore your formerly shattered confused sexuality." Through the grace of the Church, he says, "I was given back my masculinity that I had squandered." In fact, the Church has rescued people like Paul, Augustine, Francis, and Ignatius. So much so, he says while arguing that he himself is not a saint, that you "could almost say that the Church's mission is to collect miserable sinners and turn them into saints."

Voris claims that the threat to expose his past means that he is being targeted by the Diabolical (by which he means Satan). But he remains convinced that he is under the protection of St. Michael and the Virgin Mary, who will always defeat the plans made by the devil to bring men like him down.

Voris also assures those watching that there is little chance that he will engage in sexual sin with homosexual men again. Six years ago, at the Fatima's shrine, he "consecrated my chastity to our Blessed Mother."

The video is here: