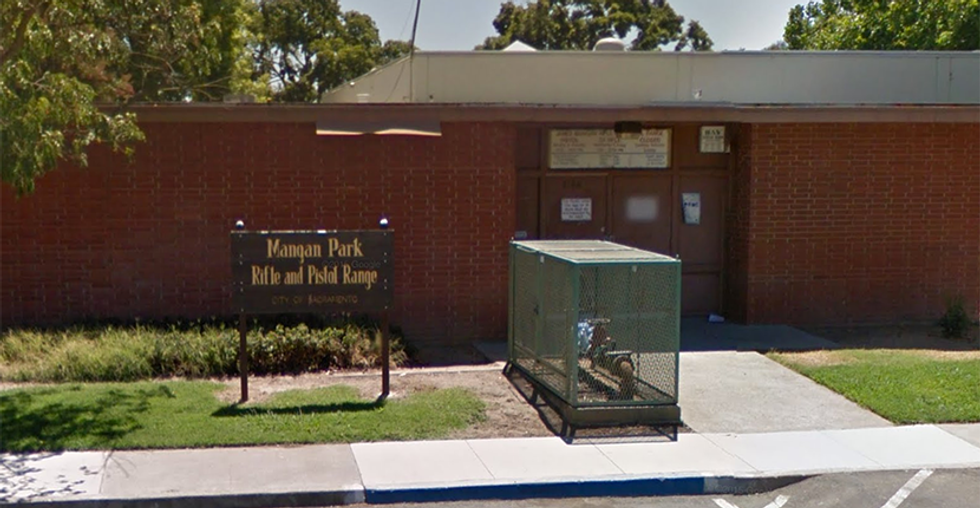 Home Alone's fake gangster movie might shout out about pumping someone's guts full of lead but one neighborhood in Mangan Park in Sacramento, California was literally being poisoned with lead from the local gun range. A note is now taped to the front door of the James G. Mangan Rifle and Pistol Range but that is the only notice and warning resident's received before local reporters began asking questions.

Fifteen months ago the range was "temporarily closed" because it was polluting the area with hazardous levels of lead dust after decades of gunfire, according to the Sacramento Bee. In the time that the range has been closed neither the state nor county has cleaned the toxic dust from inside or outside the range, city documents show.

According to environmental scientists interviewed by The Bee, the procedure would dictate soil in the neighborhood and surrounding areas be tested for lead levels both at the time of closing as well as regular intervals following. The city failed to do any testing until April 1 and only after reporters began requesting information for their story.  Initially, Sacramento city parks director Christopher Conlin said he didn't plan to test the soil near the range, but just two weeks later the city changed course.

The range was also tested more than 20 times inside the building between 2006 and 2014. Each test registered lead levels above what the California Department of Public Health considers to be hazardous to human health. Some tests even revealed levels hundreds of times greater than the state's maximum.

A 2012 assessment from an outside consultant revealed that years of operation with an outdated ventilation system meant that the facility failed to filter the lead dust. The city's consultants went so far as to report unfiltered lead dust spewing into the outside air. However, the city waited two more years before they tested the exterior of the range. When they did they found lead levels 70 times higher than the legal hazard limit.

Given the extent of the contamination, experts argue that the city should have cleaned the range and surrounding areas not to mention disclose the hazardous pollution levels to nearby residents.

“If you don’t clean this place up and you don’t check the soil afterward, you are just leaving a problem that could be far larger,” explained Peter Green, a civil and environmental engineering researcher at the University of California, Davis. “Either they clean it up or they are at risk of later consequences. The effects of lead have been clear for 40 years; lead is not a new, surprising problem. And this is right amongst people.”

The type of toxic vapor and dust generated by excessive ammunition firing is a common occurrence in indoor firing ranges. The Seattle Times conducted an investigation in 2014 which revealed thousands of shooters, gun range employees and even family members of shooters and range employees have been contaminated with lead “due to poor ventilation and contact with lead-coated surfaces” at the ranges.

Residents in the area were not only not informed of the contamination one resident had a birthday party for her daughter at the park adjacent to the gun range's property last summer. When local reporters asked her if she was worried about the potential health impact living so close to a building with such high lead levels, she replied, “Well, I am now.”