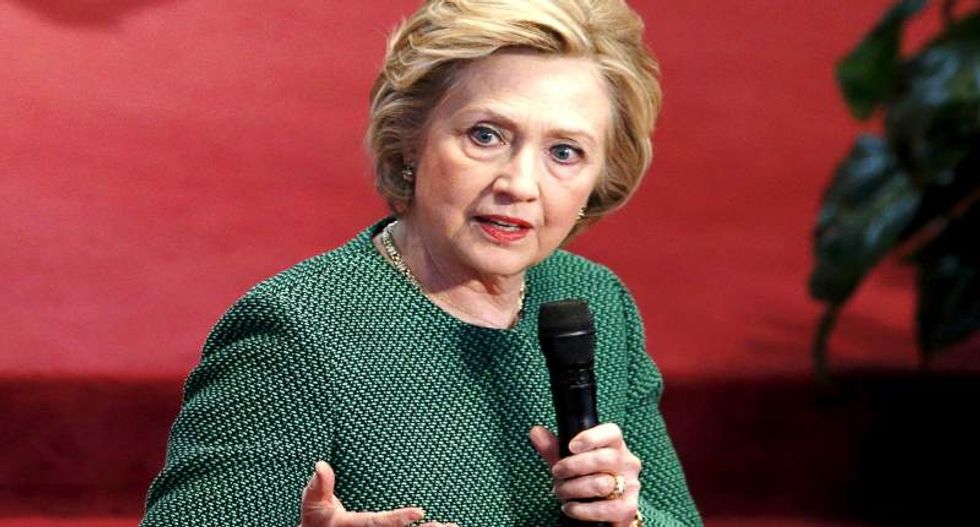 Democratic presidential candidate Hillary Clinton speaks during a campaign event at the AME church in the Queens borough of New York on April 10, 2016. (Reuters/Eduardo Munoz)

Hillary Clinton continued to put heat on Bernie Sanders on Monday for what she described as his failure to challenge the national gun lobby or to support what she called a “common-sense agenda” on gun control.

Ahead of New York’s primary on 19 April, Clinton sat down with Democratic congressman Steve Israel and five women who have been affected by gun violence. She addressed an enthusiastic crowd about her plan for improved background checks and stronger anti-trafficking laws before turning the microphone over the the panellists. Clinton called the women “some of the most courageous and persistent voices you could hear anywhere”, noting how intimidating the gun lobby can be to people who agitate for gun control.

One panelist, Natasha Christopher, whose 14-year old son was killed in Brooklyn in 2012, said she “told Mrs Clinton in the back that I was an undecided voter before, but I am with her now”, to raucous cheers from the audience.

Gun control has been comfortable terrain for Clinton during the primary season as perhaps the only issue where voters find her positions to the left of Sanders. Clinton has repeatedly attacked Sanders for supporting legislation that prevents victims of gun violence from pursuing legal action against firearm manufacturers, a position Sanders has shifted on somewhat. “If you have a manufacturer that is sending guns into an area and really knows that those guns are not being used or bought by the people in that area … should we hold that manufacturer liable? Absolutely,” Sanders said during a Democratic debate in Flint, Michigan, in March.

Clinton reiterated her support for stripping this kind of protection on Monday. “That is the rule for every other business that makes and sells every other thing in our country,” Clinton said. “You do have a duty to the general public not to be negligent, not to be irresponsible.”

Clinton called the story of Sandy Phillips, one of the event’s panelists, a perfect example of the type of problems this immunity can cause and the type of intimidation the gun lobby employs. After her daughter Jessica Ghawi was killed in the Aurora, Colorado, movie theater shooting in 2012, Phillips attempted to sue the ammunition manufacturer, only to have the suit thrown out, with the judge ordering Phillips to pay more than $200,000 in legal fees. Phillips said on Monday her family was going to declare bankruptcy “because there is no way on God’s green earth that I’m giving that company one penny”.

Phillips ended her story with a plea for action and warned: “You are one degree of separation from this being your story, and you do not want to walk in our shoes.”

Sanders often explains his relatively permissive voting record on firearms, seemingly out of step with his progressivism, by noting that he represents a pro-gun state with a strong hunting culture and very low crime. Clinton sought to challenge that.

“This is not, ‘Oh you know, I live in a rural state, we don’t have these problems,’” Clinton said. “This is, you know what? It’s easy to cross borders. Criminals, domestic abusers, traffickers, people who are dangerously mentally ill – they cross borders, too. And sometimes they do it to get the guns they use.”

Clinton’s claim that Vermont sends the most guns used in crime per capita to New York may be technically true due to the state’s proximity and small population, but it is also somewhat misleading. According to the ATF, in 2014, 55 traced guns found in New York were traceable to Vermont, less than 1% of the roughly 7,686 that were recovered, (though only 4,585 of those guns were traceable to a state). Most illegal guns in New York come from the south.

Clinton is campaigning on a platform that includes increased mental health screening for gun sales and the federal criminalization of straw purchasing, in which buyers with clean records purchase guns and resell them to individuals who could not pass a background check.

Straw buying is technically illegal because it is a crime to make a false statement on the ATF form required to make a purchase. However, “because that law isn’t specific to straw purchasing, these cases are difficult to prove and therefore aren’t often pursued by federal prosecutors”, said Chelsea Parsons, vice-president of guns and crime policy at the Center for American Progress.

In 2008, Clinton campaigned to the right of Obama on guns, seizing on a comment the president made about disaffected Americans “cling[ing] to guns” to paint him as out of touch and elitist. During this campaign cycle, however, Clinton has used the issue to prod at Sanders’ progressive bonafides. So far, the strategy has proven successful, as Clinton has been able to secure high-profile endorsements from former congresswoman Gabby Giffords, who was a victim of gun violence, and the Brady Campaign.

The latest polling shows Clinton, the onetime New York senator, with a 15-point advantage over Sanders in the state.