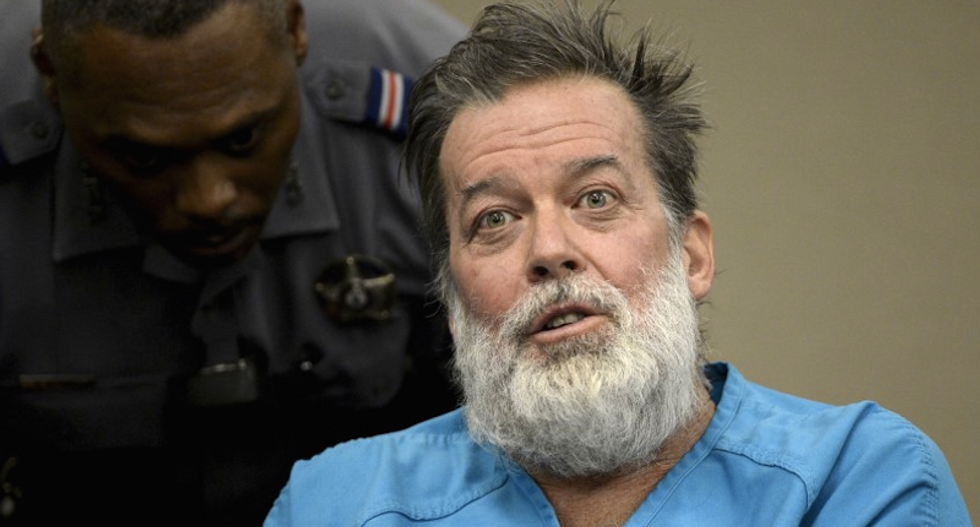 A deputy tries to calm Robert Lewis Dear, 57, accused of shooting three people to death and wounding nine others at a Planned Parenthood clinic in Colorado last month, as he spoke out at his hearing to face 179 counts of various criminal charges at an El Paso County court in Colorado Springs, Colorado December 9, 2015. (REUTERS/Andy Cross/Pool)

The man accused of fatally shooting three people at a Colorado Planned Parenthood clinic last year said he hoped that when he died fetuses in heaven would thank him for stopping more abortions, court documents showed on Monday.

Robert Lewis Dear, 57, made the comments to police after he surrendered following a shooting rampage and five-hour siege last November at the Colorado Springs clinic that also left nine others injured.

Dear is charged with first-degree murder and attempted murder.

Among those killed were a young mother, a U.S. Army veteran and a police officer from a nearby university who responded to the scene.

Dear also told police that he was upset with Planned Parenthood for performing abortions and “the selling of body parts,” according to the documents.

He said he admired Paul Hill, an anti-abortion extremist who was executed in Florida in 2003 for the murder of an abortion provider in 1994, police said.

A wounded victim told police that Dear approached her in the clinic parking lot and opened fire after saying that she “shouldn’t have come here today," the documents said.

In outbursts at earlier hearings and in media interviews, Dear called himself “a warrior for the babies,” claiming he was guilty and that there would be no trial. He also said he wanted to fire his court-appointed lawyers and defend himself.

Martinez ordered the South Carolina native to undergo a competency examination at the state mental hospital to determine if he was fit to act as his own lawyer.

The court-appointed evaluation deemed him incompetent, his lawyers said in court filings.

In an interview with the Colorado Springs Gazette newspaper last month, Dear indicated that he may have changed his mind and might not fire his lawyers.

"Yeah, I want to be my own attorney," Dear told the newspaper. "But if my attorney will start following my rules and doing what I want, then maybe I'll work a deal with him.”

Martinez will rule whether Dear is competent sometime after an April 28 hearing on the issue.