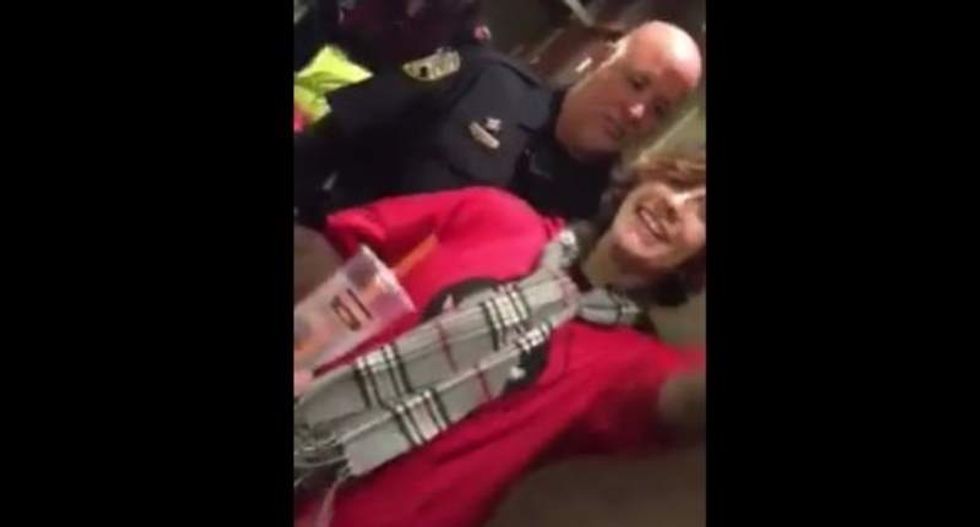 Footage posted online reportedly showing an encounter between a lesbian and police officers ordering her out of the womens' restroom. (Facebook)

A video posted online on Wednesday reportedly captures a group of police officers harassing a gay woman inside a public womens' restroom, ultimately ordering her out believing her to be a man.

According to Complex, the video showing the unidentified woman's encounter with the officers was posted by blogger Tamara McDaniel.

"This is a girl, and you guys are harassing her because she's a d*ke," the person filming the encounter can be heard saying, as the footage shows a woman wearing a red shirt, scarf, and black cap being questioned by the officers.

"I'm a f*cking female," the woman in the cap replies. "Do I have to tell you again?"

"You have ID?" the officer asks. When she says she does not, he orders her out, then pushes her toward the exit. A second officer is then heard calling her, "Sir," causing the person filming to protest, "That is a f*cking girl."

McDaniel alluded to Republican presidential candidate Donald Trump while posting the video, writing, "Is this what 'Make America Great Again' means? This makes me very sad and I want no part of this irrational fear."

The video has amassed more than 2 million views since being posted earlier this month, and can be seen below.