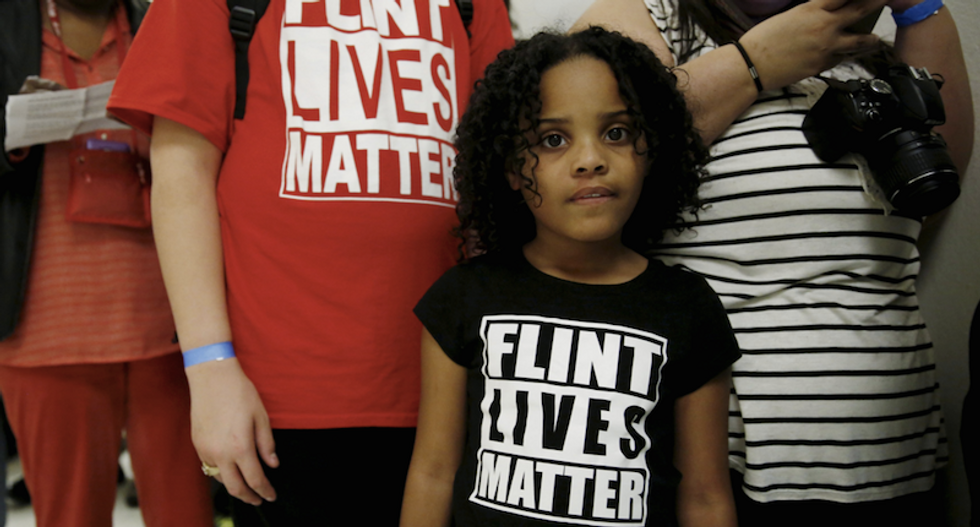 Glasgow, 40, was charged with tampering with evidence and willful neglect of duty, according to court documents.

Busch, 40, and Prysby, 53, were each charged with six counts, including misconduct in office, tampering with evidence and violation of the Michigan Safe Drinking Water Act, according to court documents. Busch, a district manager in the drinking water division, had already been suspended.

The Detroit News, citing a source, said more indictments would be filed.

The three people charged could not immediately be reached for comment. Officials with the city of Flint and MDEQ also could not be reached.

Dena Altheide, a court administrator, said no court dates or arraignments have been set. Michigan's attorney general has scheduled a Wednesday afternoon news conference to make an announcement related to its probe of the crisis.

Flint, a city of about 100,000 people, was under control of a state-appointed emergency manager in 2014 when it switched its source of water from Detroit's municipal system to the Flint River to save money. The city switched back in October.

The river water was more corrosive than the Detroit system's and caused more lead to leach from its aging pipes. Lead can be toxic and children are especially vulnerable. The crisis has prompted lawsuits by parents who say their children are showing dangerously high blood levels of lead.

Attorney General Bill Schuette in January named a special prosecutor to lead a team to probe whether criminal charges should be filed in the water crisis.

In February, former Wayne County prosecutor Todd Flood, who has led the probe, said his team would look at what possible crimes were committed in the crisis.

"The criminal charges against MDEQ officials are one step towards justice for the families of Flint who were poisoned as a result of the actions of Governor (Rick) Snyder’s administration," U.S. Representative Elijah Cummings, a Democrat from Maryland, said in a statement.

Cummings and other House Democrats have called for Snyder to step down because of the state's poor handling of the crisis, something the governor has said he would not do.

Ari Adler, a spokesman for Snyder, said the governor has supported the probe "because the people of Flint and across Michigan are owed straight answers about how the Flint water crisis happened." The governor has said the state would pursue evidence of wrongdoing and hold people accountable.

(Reporting by Ben Klayman; additional reporting by Suzannah Gonzales in Chicago and Susan Cornwell and Susan Heavey in Washington; editing by Diane Craft)