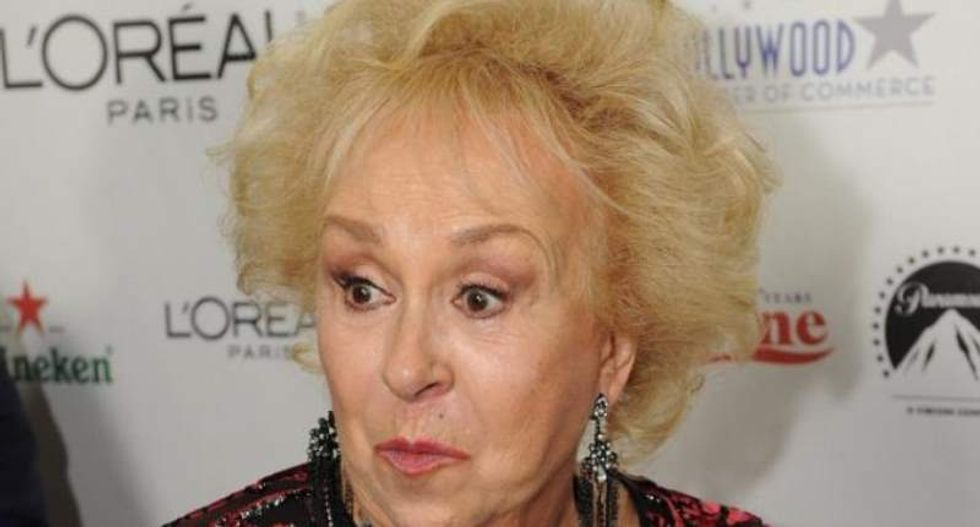 Doris Roberts was best known for her role as Marie, the interfering, manipulative mother of sportswriter Raymond Barone in "Everybody Loves Raymond" (AFP/Mark Ralston)

Tributes poured in for Emmy-winning actress Doris Roberts, the star of US sitcom "Everybody Loves Raymond," who has died aged 90.

Roberts picked up best supporting actress four times in the early 2000s for her portrayal of Marie Barone, the mother of Ray Romano's sportswriter character in the show, which ran for nine seasons.

Roberts died of natural causes on Sunday in her hometown of Los Angeles.

"My wonderful TV mother-in-law and ELR ("Everbody Loves Raymond") nemesis Doris Roberts was a consummate professional from whom I learned so much. She was funny and tough and loved life, living it to the fullest."

Roberts joined the CBS show in 1995, having carved a niche in matriarchal roles in the 1980s, including as Donna Pescow's mother on the 1979-80 ABC series "Angie" and as receptionist Mildred Krebs on NBC detective series "Remington Steele."

She won her first of five Emmys in 1983 for a one-season guest role on medical drama "St. Elsewhere."

Raised by her single mother in the Bronx, Roberts got her break on Broadway in the play "The Time of Your Life" in 1955. She moved to California to appear in ABC's "The Lily Tomlin Comedy Hour" in 1975.

She also had guest roles later in her career in "Law and Order: Criminal Intent", "Grey's Anatomy" and "Desperate Housewives".

But she was best known for her role as Marie, the interfering, manipulative mother of Long Island-based Italian American sportswriter Raymond Barone, played by Romano, in "Everybody Loves Raymond".

"We loved our mom, the great #DorisRoberts. A wonderful, funny, indelible actress and friend," tweeted Phil Rosenthal, a producer on the series, which ran from 1996 until 2005.

Roberts was married to the novelist William Goyen for 22 years, until his death from leukemia in 1983. She had one son and three grandchildren from a previous marriage.

"Doris Roberts had an energy and a spirit that amazed me," Romano said in a statement.

"She never stopped. Whether working professionally or with her many charities, or just nurturing and mentoring a green young comic trying to make it as an actor, she did everything with such a grand love for life and people."