Fox explodes at Will Ferrell comedy about Reagan's dementia: 'It's an attempt to rewrite history' 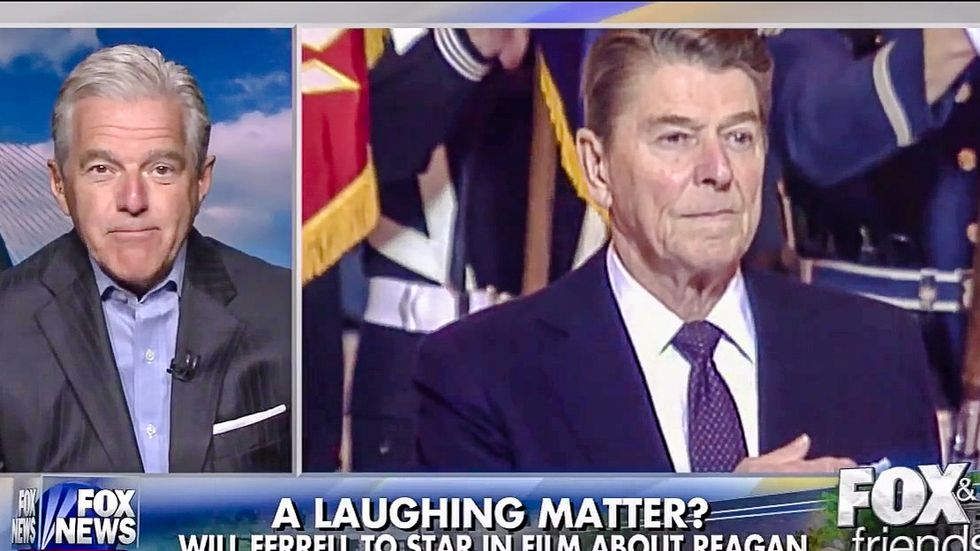 A Fox & Friends segment on Friday complained that actor Will Ferrell was trying to "rewrite presidential history" because it portrays former President Ronald Reagan as having Alzheimer's before he left office.

In Ferrell's "Reagan" screenplay, a young intern is tasked with convincing the then-president that he is playing a president in a movie.

Although the screenplay earned high praise at the prestigious annual "The Black List" competition, the folks at Fox & Friends on Friday appeared to be livid.

"Will Ferrell taking one joke maybe a little bit too far," host Brian Kilmeade opined. "Sparking outrage for mocking the president's battle with Alzheimer's, he's claiming he had it at that time. Is this really a laughing matter?"

Former Reagan staffer James Rosebush told Kilmeade that the upcoming movie was "an egregious attempt to rewrite presidential history, which to paraphrase Ronald Reagan, will fall on the ash heap of history."

"They are saying he had Alzheimer's his second term, that's not true," Kilmeade insisted.

"Absolutely not," Rosebush agreed. "The timing of this is especially spurious as it falls only weeks after [Nancy Reagan's] passing, which had millions of people mourning her and also attributing her with the grace that she delivered in taking care of him in his last 10 years."

According to Rosebush, Nancy Reagan had insisted that her husband had never been formally diagnosed with Alzheimer's until after he left office.

"So all of these spurious arguments is just an attempt to -- as a famous writer said, many a lie, to paraphrase -- many a lie is told in jest."

Rosebush added that the movie was a "ridiculous attempt to marginalize and belittle" dementia patients all around the world.

In Ron Reagan's 2011 book "My Father At 100," the former president's son claimed that Reagan suffered from Alzheimer's while in the White House.

"Three years into his first term as president, though, I was feeling the first shivers of concern that something beyond mellowing was affecting my father," the younger Reagan wrote. "I've seen no evidence that my father (or anyone else) was aware of his medical condition while he was in office. Had the diagnosis been made in, say 1987, would he have stepped down? I believe he would have. Far less was known about the disease then, of course, than is known now."

"Today we are aware that the physiological and neurological changes associated with Alzheimer's can be in evidence years, even decades, before identifiable symptoms arise. The question, then, of whether my father suffered from the beginning stages of Alzheimer's while in office more or less answers itself."