Fox hosts lose it over having to ask permission to touch women: 'Yes means yes' is 'insane' 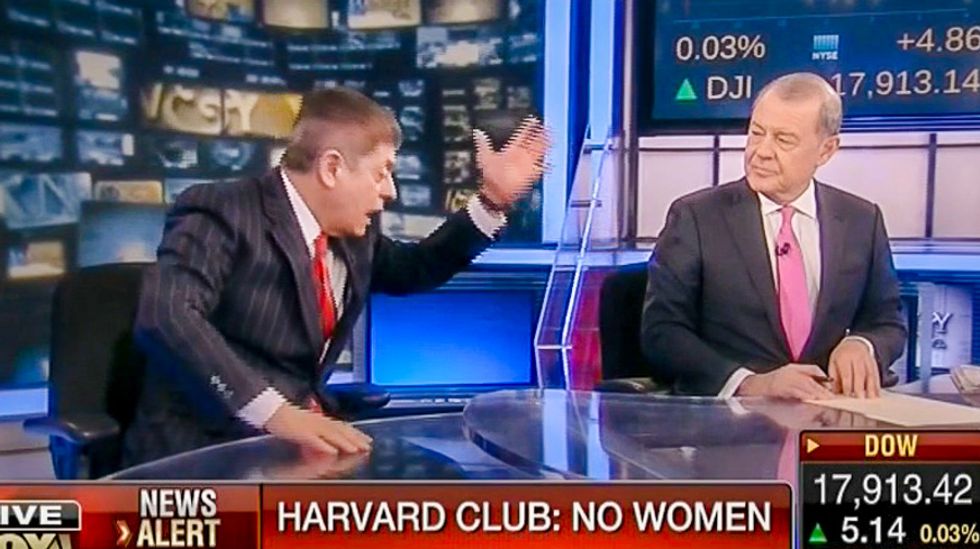 Fox Business host Stuart Varney on Thursday blasted what he called the "Yes Means Yes movement," because it meant that men could be accused of assault if they touched women without permission.

Earlier this week, one of Harvard's oldest and secretive all-male clubs issued a statement arguing that women should not be admitted because it increased the risk that male members could be accused of sexual assault.

“Forcing single gender organizations to accept members of the opposite sex could potentially increase, not decrease the potential for sexual misconduct.” Porcellian Club Graduate Board President Charles M. Storey said in the statement.

On his Thursday Fox Business show, Varney sided with the 225-year-old club.

"They are faced with the possibility of admitting women or are forced to admit women then they are therefore increasing the likelihood of a lawsuit," the host opined. "Because if a man in this day in age holds the hand of a woman on a date without first asking permission, that is an assault. In come the lawyers."

"The real story here now is, the law is now controlling intimate relationships between men and women," Varney complained. "Lawyers [and] the law should not be in the middle of an intimate dating relationship between the sexes."

The host ranted that the "no means no" rule had morphed into what he called the "Yes Means Yes movement," which requires women give permission before men can touch them.

"The young lady must be asked, may I hold your hand. Failure to ask that question where she says yes is an assault!" Varney exclaimed, slapping his desk in disgust.

"That is insane," Fox legal analyst Andrew Napolitano agreed. "Not every un-consented to touching is any of the business of the government."

Watch the video below from Fox Business, broadcast April 14, 2016.