Fox News hosts Trump bro who says he's being mistreated at college: A girl called me a racist! 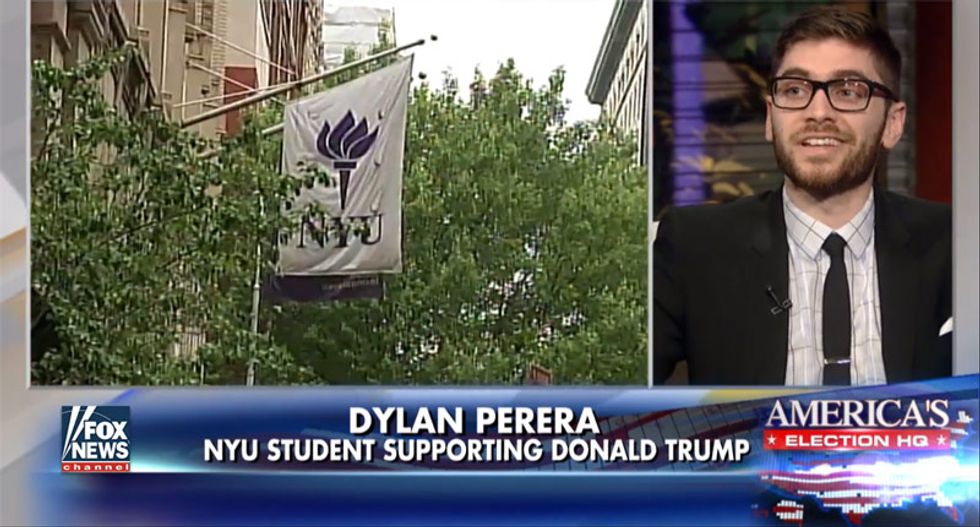 Brian Kilmeade sat down with NYU engineering student Dylan Perera, to discuss the mistreatment he's gotten for supporting Trump. "What's the reaction been like?" a concerned Kilmeade asked.

"From the students, mostly negative. They've mostly been lashing out. One time I had this girl, she started yelling at me and screaming at me, calling me 'racist,' 'fascist' — all of these random claims just because it came up that I was a Trump supporter."

"Were you stunned?" said Kilmeade.

Perera also said: "I want them to really listen to everything he has to say — in context — and really understand what he's trying to say. And I think if people listen to his full speech, they'll have a complete different view of him."

Kilmeade followed up: "Dylan, does it blow you away that for the most part — that you're a Republican, and you have a certain view, and a certain candidate, and that you're getting derision because of it? Is it discouraging?"

"I'm gonna hold strong," Perera answered. "But it is discouraging. I know other people are afraid to say anything — afraid to come out, just because they're afraid of getting bad grades, just because they might get on the bad side of a professor. They need that letter of recommendation, they're not gonna say who they who support, just because they need to get ahead — especially with all this college debt. A lot of them really just want jobs and internship. They can't be dealing with getting in political trouble."

At no point in the interview was there any mention of actual threats that have been made against a student's grades or job prospects on the basis of their preferred president candidate.