Gay Republican confronts Ted Cruz on live TV: 'What would you do to protect me and my husband?' 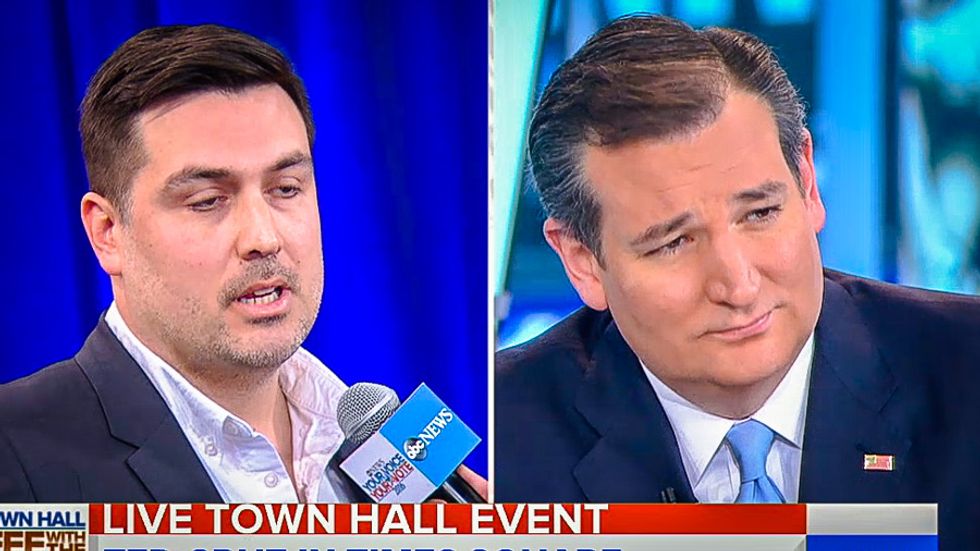 A gay "lifelong Republican" asked Republican presidential candidate Ted Cruz on Monday how he would fight to protect the rights of his family from so-called "religious liberty" laws that allow for discrimination against LGBT people.

"I've noticed a lot of religious freedom laws and somewhat institutionalized discrimination laws happening around the country," restaurant owner Todd Calogne explained to Cruz during a forum on ABC's Good Morning America. "What would you as president do to protect me and my husband?"

Cruz suggested that Calogne had no reason to worry because "religious liberty is something that protects everyone of us."

"And we shouldn't have a right to force others to give up their faith and give up their belief," the Texas senator insisted. "And I think that keeping government out of the way of your lives protects the freedom of every one of us."

But ABC host Robin Roberts, who came out as a lesbian in 2014, was not satisfied with the candidate's answer.

"Of course we do," Cruz replied. "And the First Amendment protects everyone equally, it protects our faith."

"Under the Constitution, marriage is a question for the states," Cruz opined. "And so if someone wants to change the marriage laws, I don't thing it should be five unselected lawyers down in Washington dictating that."

Blogger Andy Towle pointed out that "Cruz dodged the question" from the gay restaurant owner.

"So pizza show owner Calogne was left hanging – his question wasn’t answered, because there is NOTHING Cruz will do to protect him and his husband. Nothing," Towle wrote. "And that, of course, leaves everyone with another question: Todd, why the hell are you voting Republican?"