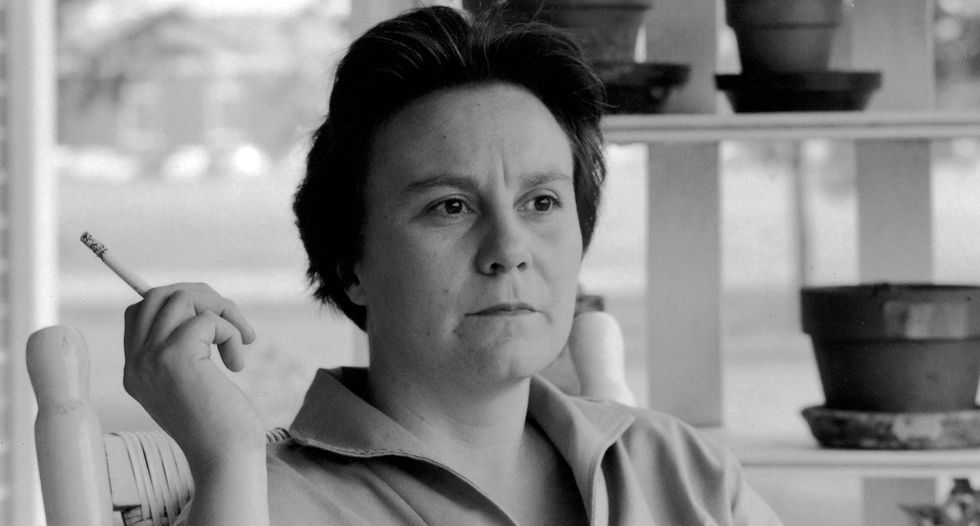 The discovery of an earlier manuscript from To Kill a Mockingbird novelist Harper Lee was the publishing sensation of last year but now her biographer, Charles J Shields, believes he has found another previously-unknown Lee text – a feature article about a notorious real-life quadruple murder.

The piece was written for the March 1960 issue of The Grapevine, a magazine for FBI professionals, just months before she was to publish her classic novel. It was unsigned, but Shields’s detective work uncovered evidence which appears to confirm its true authorship.

The article was about the gruesome murder of Herb and Bonnie Clutter and their teenage children Nancy and Kenyon in their Kansas farmhouse. Lee accompanied her childhood friend Truman Capote on his assignment for the New Yorker, reporting on how the community was reacting to the brutal slaughter.

Their interviews included detective Alvin Dewey of the Kansas Bureau of Investigation and they later returned for the trial of the killers. Capote would later use the material in his non-fiction account, In Cold Blood, downplaying Lee’s contribution in describing her as his “research assistant”.

In her article, Lee wrote of “the most extraordinary murder case in the history of the state”. She reported that the murder victims – “prominent Methodists and leaders in community activities” – had been “bound hand and foot and shot at close range … Clutter’s throat had been cut.”

She continued: “Dewey’s role … was doubly hard; the late Herbert Clutter was a close personal friend … The clues Dewey and his colleagues worked on in the beginning were meager [sic]. The killers took with them the gun and shells used to murder the family; adhesive tape used to gag three of the victims could have been bought anywhere … However, in the basement furnace room where Clutter’s body was found, investigators discovered a clear footprint etched in blood …”

She reported that two men later confessed to the murders and that their “activities … netted them between $40 and $50 in cash”.

Shields found the article while revising his 2006 bestselling biography, titled Mockingbird: a Portrait of Harper Lee. He told the Guardian that he was “looking for any clues” he might have previously overlooked. He began poring over Kansas newspapers and, in the Garden City Telegram, began reading a column by Dolores Hope, “who I already knew was a friend of Harper Lee”, he said.

Her “folksy” columns were “never very newsy”, but he was astonished by an extraordinary couple of paragraphs alerting readers to a forthcoming article.

She wrote: “The story of the work of the FBI in general and KBI Agent Al Dewey in particular on the Clutter murders will appear in Grapevine, the FBI’s publication.

“Nelle Harper Lee, young writer who came to Garden City with Truman Capote to gather material for a New Yorker magazine article on the Clutter case, wrote the piece. Miss Harper’s first novel is due for publication … this spring and advance reports say it is bound to be a success.”

How right she was. Lee became one of America’s most revered writers. To Kill a Mockingbird – a story of race relations and legal injustice set in the American south in the 1930s – has been described as perhaps the bestselling novel of the 20th century. In 1962, it inspired the Oscar-winning film starring Gregory Peck as lawyer Atticus Finch. When Lee was asked why she did not write another novel, she replied: “I have said what I wanted to say, and I will not say it again.” Go Set a Watchman, which features characters from it some 20 years later was published to mixed reviews. Lee died last February aged 89 .

Shields immediately contacted the Grapevine in Washington DC: “They said there’s been a rumour in the office for years that Harper Lee submitted something, but we don’t see anything with her byline.”

From the date of Hope’s column – February 1960 – he suggested looking in their February or March issue of 1960: “Lo and behold, in March 1960 is a … very well-written feature story about the Clutter case.”

Commenting on why she did not have a byline, he said: “Because it was typical of Harper Lee to not try to crowd her friend Truman.”

He added: “It reads like a darned good feature story.”

Further evidence of her authorship lies in details to which only she and Truman were privy, he discovered.

He will include his research in Mockingbird: a Portrait of Harper Lee: From Scout to Go Set a Watchman, published by Henry Holt on Tuesday.

The Grapevine will reprint Lee’s article next month. Shields has written the introduction for this “exciting find”.