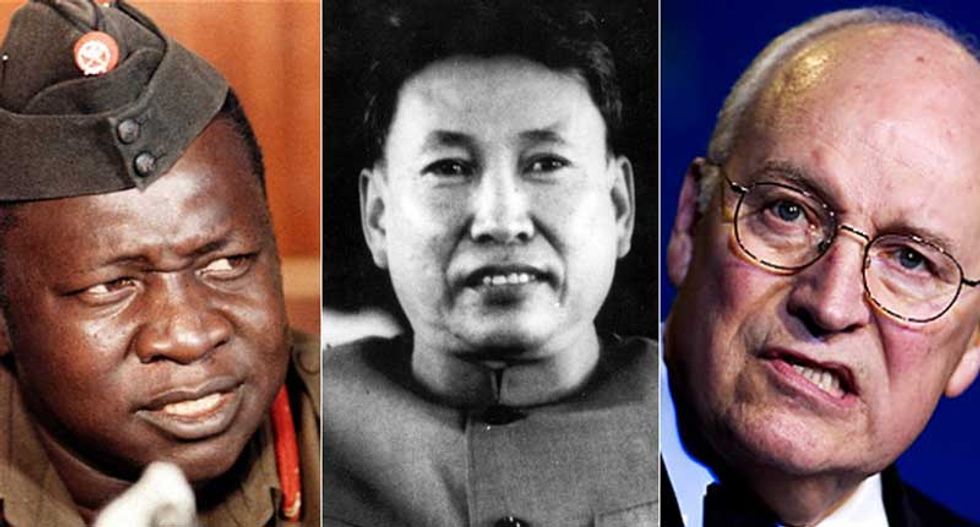 History sucks. Everyone’s always so angry, all the time. The story of humanity is nothing but murder and wrath and jealousy and rebellion and war and rape and slaughter. Throughout it all, though, there’s been one common denominator (two, if you count greed):  Not enough marijuana.

Life under the Romans probably would have been a lot more tolerable if you’d just been able to legally score an eighth in Lutetia. The uncool Romans murdered Jesus -- the first stoner -- and everything went to hell, distorting Christ’s message of getting lit and letting things go. The Crusades and the Inquisition would never have happened if Christians had just followed the first precept of their Savior: Chillax with thy neighbor.

This week -- and especially on 4/20, that holiest of holidays -- let’s light a hemp candle for what would have happened if we all could have just united under the eaves of the Church Of The Sticky Icky Icky. Here are some people who could have really used some divine flower.

We all know the Reichsführer was a pretty uptight guy with a lot of prejudices and hangups. Think of how differently history may have unfolded if weed had just been legal in Weimar Germany. It was all beer this, opium that, no wonder people were depressed and angry! If “show me the way to the next whiskey bar” had just been “Bitte, wo ist die dispensary?” it might have saved countless millions of lives and a whole lot of trouble. Talk about a Reichstag fire! Spark it up, Adolf! Also, he would have been a better painter.

Winter in Russia is cold and endless and chills the bones. Vodka might briefly lift the spirit, but it just ends in suicide. How many millions of people disappeared into the Siberian wasteland because Uncle Joe had a nasty Stoli hangover? Imagine if Stalin had just horked a bong at the dacha and sat around with his Politburo, saying, “Dostoyevsky was real, really real, man!” A spliff a day keeps the Cold War away. Bonus round: Baryshnikov and Horowitz wouldn’t have defected and the propaganda posters would have been even weirder.

Uniter of Mongolia, Conqueror of China, you rode your army to the gates of Budapest. We get it, Temujin, you had vengeance on your mind. All that airag rotted the great Khan’s brain, made him weird and brooding. But how much differently it would have gone if the Mongols had just cultivated kush out there on the steppes. All that open land, all those rushing streams, Mongolia would be a great place to get baked and go for a shirtless hike. And you must agree that “Golden Horde” is the best name for a strain ever.

Well, here you have a fine candidate for History’s Greatest Asshole. As if the Vietnam War weren’t traumatic enough for the people of Cambodia, then this guy had to come along and turn them into bones. Forget The Golden Triangle; heroin kills. What if The Killing Fields had been used for planting cannabis sativa? The Cambodians would have built shit that made Angkor Wat look like a shopping mall. And Pol Pot could have dedicated those buildings, saying stuff like, “I love the dimensions, they’re so.” Plus, his last name was "Pot."

Of all the people on this list, Idi Amin is the one who most likely did get stoned. He had a pretty decadent lifestyle, to go along with the pilfering the national treasury and the extrajudicial killings and the political massacres and the rumors of cannibalism. Obviously, though, he didn’t smoke enough. Here’s to an alternate timeline where the fatty lit a fatty and Uganda in the '70s was nothing more than a chic spot for the global jet set.

OK, technically, she wasn’t a dictator, and wasn’t even really that murderous in the grand scale of British autocrats. But who among us doesn’t think that the Iron Lady probably needed to chill out by loading a bowl with Denis while watching Coronation Street? It could have saved all of England from a bunch of labor strife and crappy punk rock. She could have smoked with Queen Elizabeth, too. “Come on, Lizzie, let me hold your scepter,” she would have said. “Oh Hello! Hello! Heeeeelloooooo!”

“Dude, what if we, like, totally used your brother to steal the election in Florida and then exploited an international tragedy to start a catastrophic war that would bankrupt the treasury and cost thousands of Americans their lives and limbs, all so a few corporate shareholders could make massive profits?” Come to think of it, Dick Cheney probably is a stoner. Why else would he have shot that guy in the face because he thought he was a bird? Pussy pussy pussy marijuana, Darth Cheney! Hey hey hey. Get high!

Neal Pollack is the author of 10 books of fiction and nonfiction. His latest Kindle Single, Not Coming Soon to a Theater Near You, chronicles his disastrous attempts to make it as a writer in Hollywood. He lives in Austin, Texas, against his will.