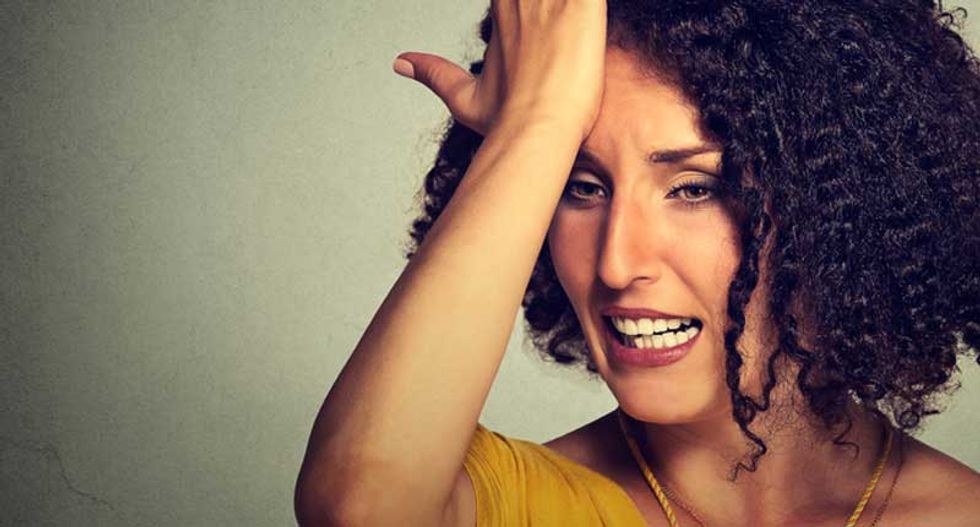 It's been about ten years since anyone asked me, "Why don't you have kids?"

"Just lucky, I guess," was my response then (it was a kid who asked me), and my friends and colleagues just know it's a non-issue, like you wouldn't ask Woody Allen if he'd like to go camping.

The subject has been in my thoughts, though, ever since I realized that I'm about to turn 50, which means that not being a celebrity, my chances of reproducing are now Olsen-twin thin. The realization that my fertility was a closed issue made me feel a bit like I did when they retired the Concorde: It wasn't likely I'd ever use it, but it was nice to know it was there.

Now if this were a movie, this would fling me into crisis mode -- I imagine Sandra Bullock having a comical panic attack, to bouncy-but-urgent music, and hatching a crazy plan to go the turkey-baster route with her gay BFF (played by Matt Damon). Of course, there would be happy endings all around, including an infant so cute she would make a basket of kittens look like Keith Richards.

But I didn't panic. I felt relieved and actually enjoy my friends' kids more now that the threat of motherhood had passed. I had occasional baby cravings in my 20s and 30s but curbed them like you would a yen for chocolate or cigarettes.

I never wanted kids the way some women do and I decided I wouldn't have one unless I got really rich, and since I didn't, I didn't.

Money plays a part in a lot of women's decisions. The U.S. birth rate recently dropped by 2 percent, Time magazine says, possibly because women are worried about having kids in this economy; it costs about $221,000 to raise one for 17 years (sadly, though, the story says, the economy is also making some of them skimp on contraception).

So, done. Curtain. And now a moment to stretch my legs before starting the last act.

Wanting kids isn't just the social norm, it's said to be a biological imperative, the only supposed "duh" of evolution, so I know my lack of sentiment isn't especially mainstream. I listen to people rhapsodize about parenthood, that it's so fulfilling and the greatest job in the world and good for them -- the more happiness in the world, the better.

Then I see parents at Target -- with one kid screaming in the cart, one screaming in their arms -- looking as blissful as a cat in a dryer. And I remember to take my pill.

Maybe because I was raised in the '70s heyday of feminism, or maybe ambivalence toward breeding is innate (Madelyn Cain's 2001 book The Childless Revolution: What It Means to be Childless Today, touches on the Mest gene in mice, which seemed to determine their levels of maternal behavior), but I never felt fazed by social pressure in my decision.

Now, in the interest of people who are made to feel defensive about their choice to be childless, and those who put them there, here are "Nine Things People Say When They Hear You Don't Want Kids" (and ways I've found to counter them).

1. Aren't you worried about ending up old and lonely?

No. When Mel Brooks, playing the 2,000-year-old man, joked that "I have over 1,500 children and not one comes to visit me on a Sunday," he had a point: There's no guarantee that kids will be there for you in your old age. Plus, the University of Florida has shown that the idea of the lonely, childless senior is flat not true.

University of Florida sociology professor Tanya Koropeckyj-Cox's 2003 study concluded that there's no higher rate of depression or loneliness among childless seniors. Of the 3,800 people between the ages of 50 and 84 who were surveyed about loneliness, responses didn't vary much between those who had kids and those who didn't. According to the University of Florida report:

"One reason is that some people without children are able to maintain social ties throughout their lives that may substitute for what children would have given them, Koropeckyj-Cox said. They may do this with friends, work relationships or the younger generation, she said."

As for those seniors who did have kids, it was how well they got along that mattered, not just the fact that they were family.

Thanks! But that's what everyone thinks! You know damn well they're not all right!

That's nice, dear ... have a cookie. While some people simply adore kids, others of us are better at providing wise Mrs. Garrett-style comfort. If you're a good listener, there are already plenty of kids and adults who could use your empathy.

"It's a completely overused sentiment, but it takes a village," says Jenn Cole, a self-employed graphic designer from San Francisco, who can't wait to give her support as the "cool auntie" but has no interest in being Mom.

"In this increasingly complex world, kids need lots of adults in their lives. This used to be covered through extended-family networks and close-knit communities," she writes in an e-mail, adding that she cherished the outside influences of teachers, neighbors and mentors. "I will never forget the ballet teacher that helped me find my own beauty in movement, or the English teacher who got me deeply into literature, or the religion teacher who subtly echoed my questioning, or the old lady up the street who taught me to bake cookies and was so different from my mean and bitter grandmother. I can't wait to be these things to my friends' kids," she says.

Indeed, what would any of our parents have done without outside support?

I was raised in a family. That was plenty.

Seriously, some people just don't function well in traditional families, which are like albums -- there are only two tracks you like, but you have to buy the whole damn record. Some of us just work better a la carte.

"Ten years ago, I did this children's festival," says a close friend who is a parent and a teacher, "and there were these vendors, and on this one tote bag there was a poem about the beauty and innocence of children and how wonderful the world was because of children. I said to her 'You don't have kids, do you?' And she said 'No, but I really want them.'

"One of the pluses of not having children is being able to maintain this idealism that human beings are innocent."

This woman is as good with kids as anyone you'll ever meet, but not because they're angels.

"I love kids, but not because they're nice," she says, adding that they're actually downright mean at times. "Don't have a kid thinking they're going to make you feel better about yourself.

"They're more real. They haven't built up the bullshit meter yet, so you know where you're coming from all the time."

She loves them, she says, because they're people, and she loves people.

And they're their own people. Don't have a kid if what you want is a Mini-Me.

"When we have a kid, there's the idea that somehow ... they're going to represent us in the world, and they're going to love us unconditionally ... that's the reason people have kids. If you knew the moment you had them you had to let them go, who would have kids?"

It's amazing how selective our society is about the "natural" things we promote versus the ones we scowl at. Nudity is natural -- and banned. Hunting is certainly more natural than shopping, but most people wouldn't kill a pig to get a Baconator.

7. "It's a woman's greatest achievement."

Producing a spin-off could well be the greatest achievement of a lot of people, but just because your contributions don't get diaper rash doesn't mean you haven't made any.

Some notable childless achievers: Jesus Christ, Julia Child, Oprah Winfrey, George Washington, Amelia Earhart, Rock Hudson, George Clooney, the Dalai Lama, Dr. Seuss, Margaret Mitchell, Katharine Hepburn, Jay Leno and Helen Mirren. Mirren was traumatized by an educational film on childbirth as a teen, saying (quoted here in Marie Claire): "I haven't had children, and now I can't look at anything to do with childbirth. It absolutely disgusts me."

Now that I'm old, no one can say this to me anymore, but if anyone says it to you, Grasshopper, just return their condescending smile and say that one day they'll change their mind about their partner, career choice, spiritual predilections or any other extraordinarily personal element of their lives. See how they like it.

This is one of my favorites, as though kids were canapés or raffle tickets that would be gone by the time the party is over instead of people who require care, feeding and lots and lots of things.

"When I see babies, not only do I see the beauty, joy and miracle of life, I also see nappies, landfill waste, vast amounts of food and money needed, and a very shaky, unpredictable future," Joanna Benn wrote for the BBC Science & Environment blog when she was an independent on the whys and whethers of having kids. She now works for the United Nations Environmental Program, but gave permission to quote her past work, where she also noted the U.N. projections that "the world population will nearly stabilize at just above 10 billion people after 2200."

Overpopulation is the greatest threat to our environment, according to a recent survey of professors at State University of New York College of Environmental Science and Forestry. In a story in Science Daily, systems ecologist Charles Hall called it "the only problem."

A study by Oregon State University says that the carbon imprint of child born in the U.S. now is 20 times as important as the other eco-savvy measures a parent might take, like recycling or driving a hybrid vehicle (the carbon emissions in America, with our consumer-based lifestyle and longer life spans, is higher than in many other countries).

The choice of whether to have kids is such an intensely personal one that it seems weirdly disproportionate to literally put the weight of the world on one's shoulders when considering it; it's at least self-satisfying to know that my choice was a green one, albeit by accident.

Finally, it's less what we do to the world as what the world is capable of doing to us that also made me leery of bringing anyone into a place this tough. You have to be an optimist to have kids, and I'm more your neurotic emotional claustrophobe. At least I know it; I also know, unshakably, that I made the right choice.

And choice is what it comes down to in the end -- a simple to each his own, without either side passing judgment on the other for the most important and personal decision of all.