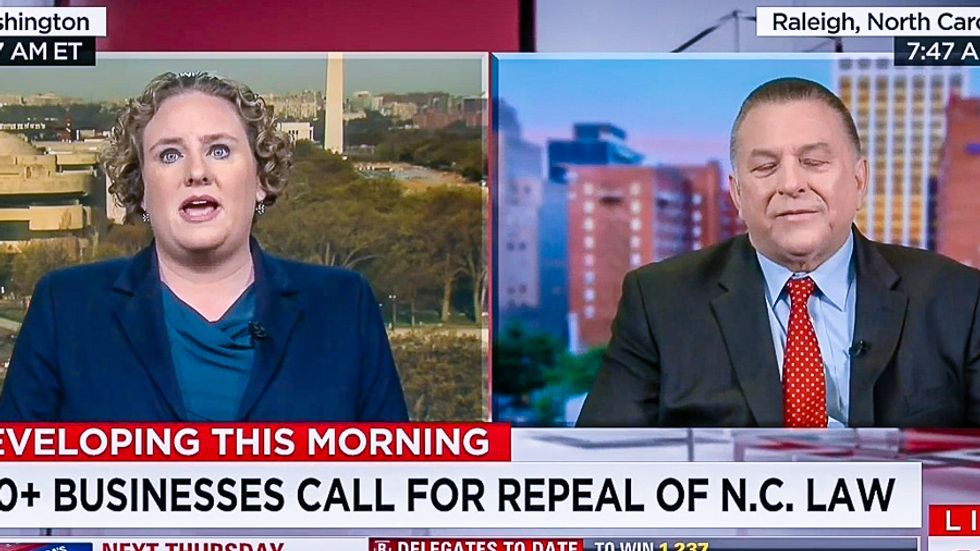 Stam argued to CNN on Thursday that the Republican-controlled state legislature passed the law as a reaction to Charlotte's "extreme" and "weird" ordinance that gave transgender people the right to use the bathroom corresponding to their chosen gender.

But Warbelow pointed out that cities around the country had been enacting similar ordinances for over 40 years.

"A couple of things I don't understand," Stam complained. "When PayPal made its announcement that it was coming [with 400 more jobs] three weeks ago, North Carolina had the same law on discrimination that it has today."

"And this is the same with the NBA talking about not bringing an All-Star game to Charlotte," he continued. "The Charlotte action is what the NBA and PayPal said they wanted to see so they're punishing Charlotte? Only Charlotte will suffer from that, not the rest of the state of North Carolina."

"The North Carolina law is uniquely terrible," Warbelow told Stam. "I think maybe some of the legislators would understand it better if they had spent more than 12 hours shoving it through from both houses and signed into law."

Warbelow noted that the law "strips away protections for people of all characteristics: race, sex, disability."

"It stops cities from protecting their residents and visitors, including LGBT people," the HRC attorney added. "And then has outrageous provisions making a subset of women -- transgender women and girls -- enter into men's restrooms in public buildings, from libraries to some of the major airports in the city. It's truly outrageous."