‘I’m not desperate, are you?’: Watch John Kasich snap at reporters after teaming up with Cruz 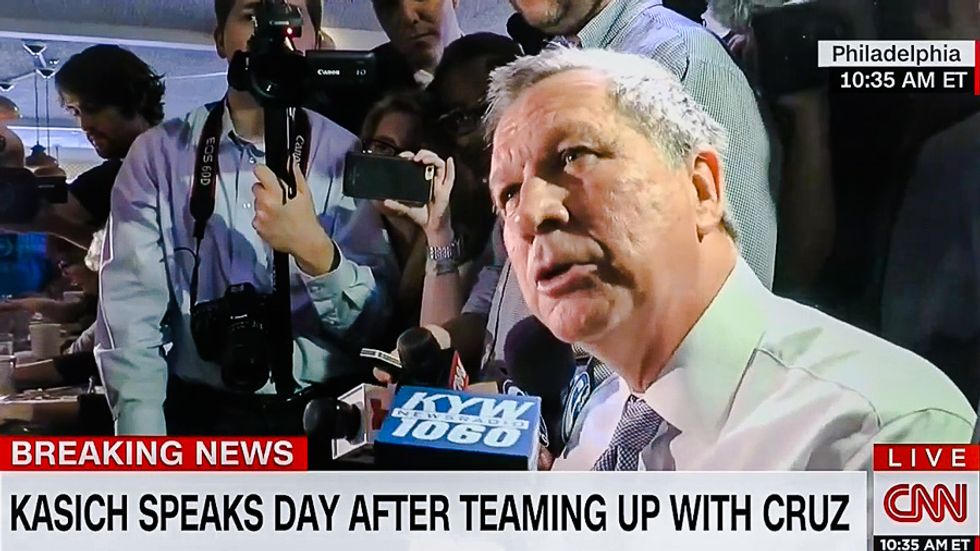 Republican presidential candidate John Kasich on Monday lashed out at reporters at a diner in Philadelphia after he was asked about his plan to deny Donald Trump the nomination by teaming up with GOP hopeful Ted Cruz.

Cruz announced in a statement on Sunday that his campaign had agreed to “focus its time and resources in Indiana and in turn clear the path for Governor Kasich to compete in Oregon and New Mexico.”

While speaking to reporters from a Philly diner on Monday, Kasich appeared to be annoyed by questions about the alliance.

"The fact is, we don't have all the resources in the world," the candidate told reporters as he was having breakfast. "I feel that it's very fair for me to be able to go to areas where I can spend my resources most effectively, and the same is true for Sen. Cruz."

"What's the big deal?" he quipped. "We're going to go to a convention, it's going to be an open convention. And the delegates will pick that person who can do the best in the fall."

The Ohio governor added that reporters should "have a little bit of civility when you do your job."

"I'm not going to spend resources in Indiana, he's not going to spend them in other places. So what? What's the big deal?" Kasich said. "You folks have been counting me out before I even got to New Hampshire. And now we can't jam all of you into this diner. I mean, everybody chill out!"