Jane Sanders tries Jedi Mind Trick on CNN after 'whore' comment: 'I didn't hear it at all' 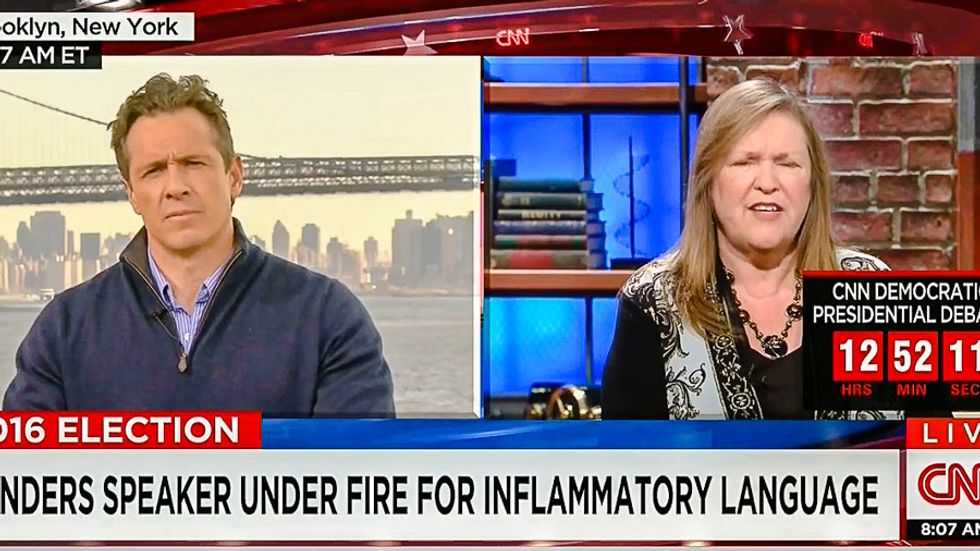 Jane Sanders, the wife of Democratic presidential candidate Bernie Sanders, insisted on Thursday that she never heard a campaign surrogate complain about "corporate democratic whores," and said that she "can't imagine" anyone ever attacking Hillary Clinton like that.

At a campaign event in Washington Square Park on Wednesday, Sanders surrogate Paul Song lashed out at "corporate Democratic whores" who wanted incremental changes to the health care system. Song later clarified in a tweet that he had been talking about Democrats in Congress instead of Hillary Clinton.

And although Jane Sanders was at Washington Square Park event on Wednesday, she suggested to CNN's Chris Cuomo on Thursday morning that the comment may have never happened.

"That was translated as being code for something about Hillary Clinton," Cuomo explained. "Do you believe that, and what do you want to say about that choice of words?"

"I'm sorry, I didn't hear it at all," Sanders declared incredulously. "Strange choice of words. And I can't imagine anybody was speaking about Secretary Clinton that way. I don't know who said that."

The candidate's wife agreed that campaigns had some responsibility for what surrogates said, but downplayed the importance of the "whore" remark.

"I think a mischoice of words is not as important as trying to carry out a strategy of trying to disqualify people or trying to make them seem less than," she opined. "So, I think there is a lot of that to go around."

In a tweet on Thursday, the candidate himself repudiated Song's remarks.