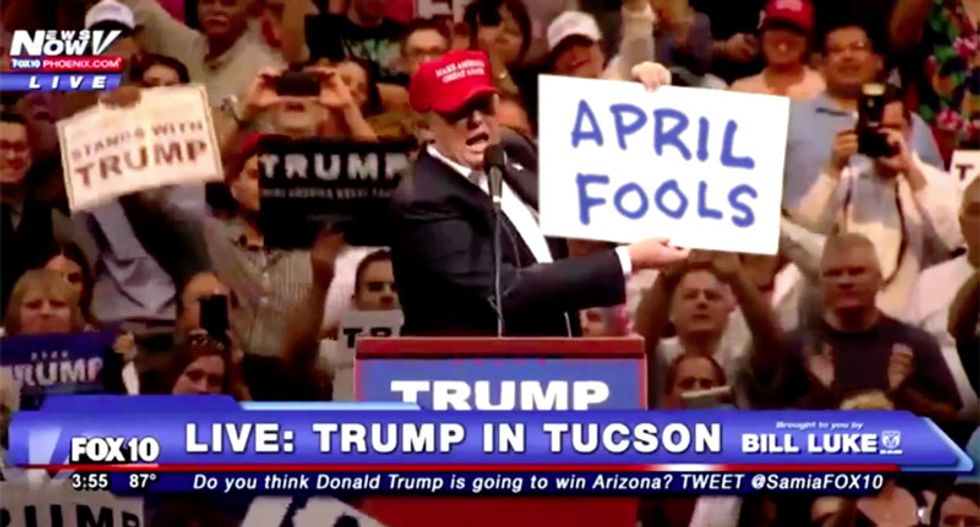 Jimmy Kimmel shared a bombshell piece of news from "Donald Trump" himself — in light of all the speculation out there that Trump's campaign might have been a massive publicity stunt that has gone farther than he ever expected.

"Nine months ago, I announced my candidacy for president," says a pretty good Trump impersonator, in a voiceover. "The journey has been an unbelievably interesting one — and fascinating. But, it's also been a real wakeup call."

As video plays of violence at Trump rallies, he continues: "Our country is totally divided. There's so much hatred — so, that's what I made my campaign about! I said the craziest things I could think of."

After a brief montage of "things you never heard a candidate say," he continues: "But I will tell you this — and I can say it with certainty: I had no idea it would go this far. No matter how insane I got, millions of you showed up to support me. Me! The guy who hosted The Apprentice; and sold steaks. But enough is enough. It has be stopped; it has to be stopped now."

"April Fools, America!" declares 'Trump. "I'm not really running for president. It was a joke! You're so stupid, it's mind-boggling. It really is. Now go vote for my friend Hillary Clinton, and Make America Great Again."

"I can't believe you bought these crappy hats."