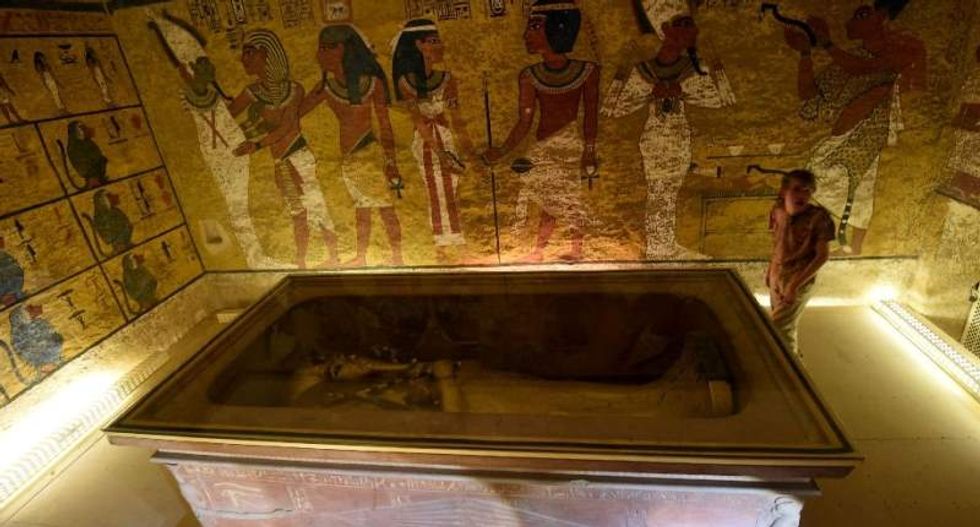 The golden sarcophagus of King Tutankhamun displayed in his burial chamber in the Valley of the Kings, close to Luxor, 500 kms south of the Egyptian capital Cairo on April 1, 2016. (AFP/Mohamed El-Shahed)

Egypt's antiquities minister said on Friday more tests were needed to determine whether there is a secret chamber in the tomb of Tutankhamun that some believe may hide Queen Nefertiti's remains.

The announcement by Khaled al-Anani at a press conference in Luxor dashed hopes that another radar scan conducted on Thursday would provide certainty on whether the ancient tomb had hidden chambers.

His predecessor Mamduh Damati had said earlier this month that there was a "90 percent chance" of two hidden chambers containing organic material, behind a wall in the ancient Egyptian boy king's tomb.

He said experts would conduct a fourth scan of the tomb in the end of April, then invite scholars for a conference to study the results in the first week of May.

"Nothing will be announced until there is a precise study," he said.

Renowned British archaeologist Nicholas Reeves, who attended the press conference, has said that Nefertiti's tomb could be in a secret chamber adjoining Tutankhamun's in the Valley of Kings necropolis at Luxor in southern Egypt.

According to him, Tutankhamun, who died unexpectedly, was entombed hurriedly in an underground chamber probably not intended for him.

Former antiquities minister Damati said this month that preliminary scans had unearthed evidence of "two hidden rooms behind the burial chamber" of the boy king.

Anani had told AFP on Thursday that analysis would determine the thickness of a possible wall behind the funerary chamber.

"There is a possibility that there is a cavity, after the latest scan. I hope we will find something... but as a scientist I need to be careful before announcing results," Anani said.

He added that if the latest scan revealed further evidence of a hidden room, a small hole could be bored through a wall and a camera inserted to discover what lay behind.

Nefertiti played a major political and religious role in the 14th century BC.

She actively supported her husband Akhenaten -- Tutankhamun's father -- who temporarily converted ancient Egypt to monotheism by imposing the cult of sun god Aton.

Tutankhamun died aged 19 in 1324 BC after just nine years on the throne. His final resting place was discovered by another British Egyptologist, Howard Carter, in 1922.