Maddow: Cruz 'grafting' Fiorina onto campaign is a Reagan idea -- that flopped 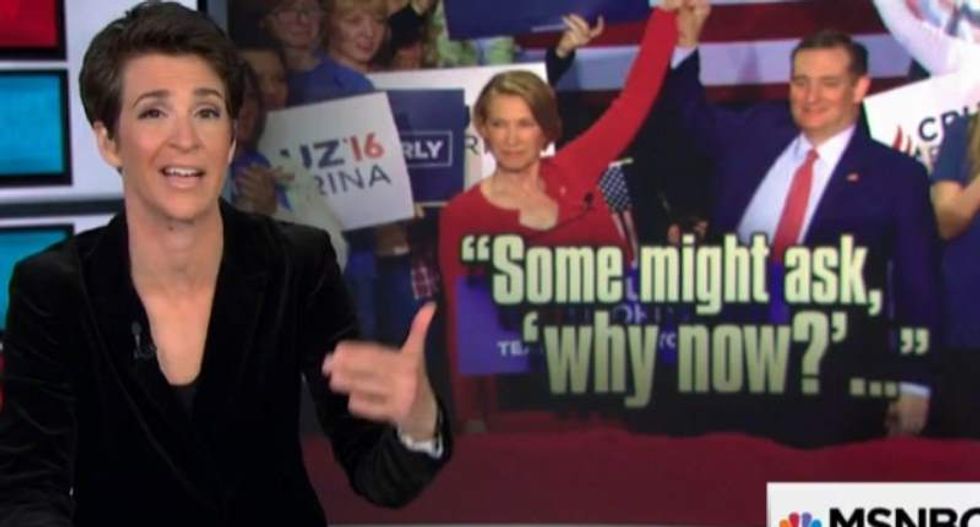 MSNBC host Rachel Maddow went to great lengths on Wednesday to break down how Sen. Ted Cruz's (R-TX) campaign might be pitching the idea of Carly Fiorina as his running mate to the remaining GOP primary states.

"They're telling Republican voters in the states that have yet to vote, 'Listen: you may not have been sold on Ted Cruz so far but try this on for size,'" she began. "'If Donald Trump doesn't keep winning state after state after state, if Donald Trump doesn't go on to win the Republican nomination; and if the Republican presidential nomination process therefore goes to a contested convention; and if at that contested convention, the Republican Party decides to choose Ted Cruz as their nominee; and if the Republican Party then subsequently chooses to honor Ted Cruz's choice of who he would like his running mate to be; and if after all of that that Republican ticket goes on to beat the Democratic ticket in November, and Ted Cruz becomes president; and if thereafter Ted Cruz dies in office, then Carly Fiorina will get to be president. If you haven't been sold on Ted Cruz before, does that sell you on voting for Ted Cruz, even if nothing else did?"

The Tea Party lawmaker introduced the former Hewlett Packard CEO -- and former opponent for the Republican presidential nomination -- as his choice for vice president on Wednesday, just a day after getting trounced by front-runner Donald Trump in five states and failing to make any headway with party delegates. Maddow pointed out that Fiorina herself was thumped in her 2010 Senate bid against Democrat Barbara Boxer.

But Cruz's "game-changing stunt," as Maddow put it, has historical precedent: Ronald Reagan -- who current Republicans enjoy name-dropping -- was experiencing his own difficulties running for the party nomination in 1976 when he revealed that he tapped moderate Sen. Richard Schweiker (R-PA) as his running mate, and even tried to push incumbent President Gerald Ford into announcing his own VP choice early.

"Imagine yourself as Ted Cruz. You would probably be willing to try something audacious on a day like this," she said. "Imagine yourself concluding that maybe you should try to add to your personal appeal by simply grafting a whole second person onto yourself and your campaign who some people might like better for you."

Unfortunately for Reagan, though, he lost his bid to replace Ford and was criticized for reaching out to the "liberal" Schewiker.