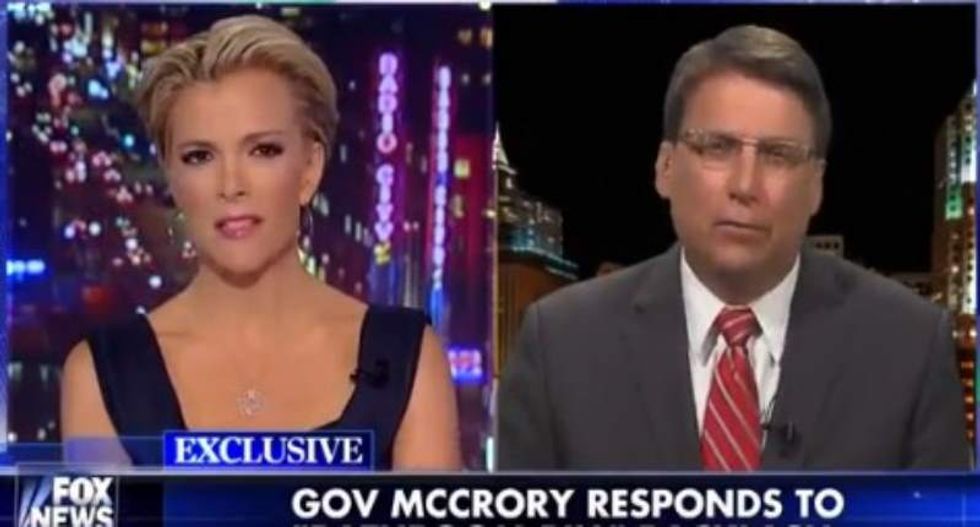 North Carolina Gov. Pat McCrory found himself ducking Megyn Kelly's questions on Thursday when the Kelly File host pressed him on the rationale behind the anti-trans law sparking criticism against his administration.

"I've been in women's bathrooms my whole life, and we don't have the urinal situation; we've got like, the stalls," Kelly said. "We get to go in and we do our business, and we don't see each other. So why are you concerned about girls exposing themselves or seeing somebody else exposed in a woman's bathroom?"

"I can't believe we're even talking about this," McCrory said, before blaming "the left" for the passage of HB2 by the Republican-dominated state legislature. The law rolled back anti-discrimination statues implemented in Charlotte, and bans trans residents from using public restrooms according to their gender identity.

"It's not just womens' bathrooms, it's mens' bathrooms," he continued. "In fact, the Obama administration is now putting requires on federal money given to states that they also have to have this gender identification requirement for schools."

"If you could get back to my question, though," Kelly interjected, before noting the negative stereotypes characterizing transgender men and women as molesters.

"They're not. That's not true," she said. "Typically male molesters are heterosexual, and if they want to sneak into a bathroom they'll do it. But 90 percent of the cases, molestation happens with someone you know. So what is the fear with the transgender situation in the bathrooms?"

McCrory said the law -- which has already spurred cancellations from various musical acts as well as the scuttling of a planned PayPal facility in the area -- was not implemented out of fear but out of an expectation of privacy insisted upon by families.

"When their daughter or son goes into a facility, they expect people of that gender -- that biological sex or gender -- to be the only other ones in that," he said.