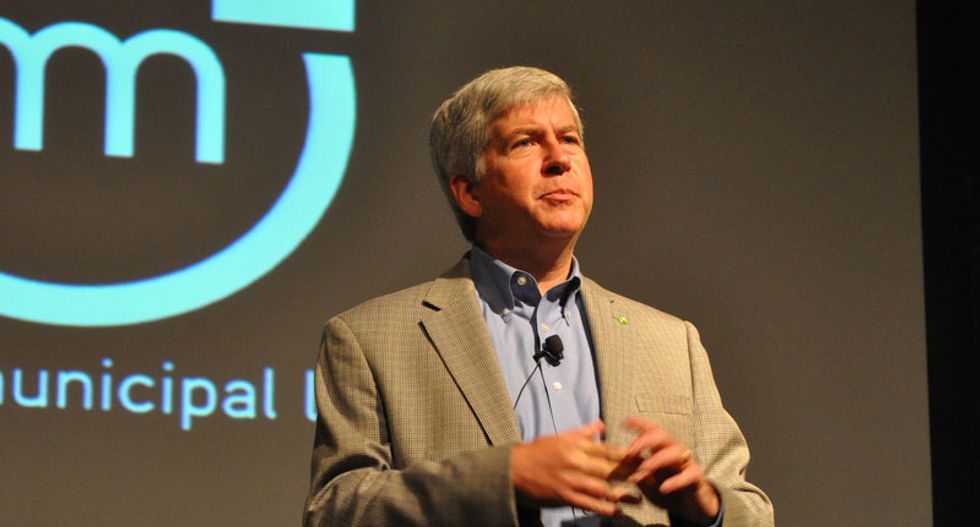 The lawsuit, which aims to cover more than 58,000 students, said Michigan’s emergency manager law allows for Snyder to appoint an unelected individual to “rule by decree” over the school system.

“Michigan’s emergency manager law and related practices were used to compromise and damage the quality of education received by DPS students with life­long consequences in the name of financial urgency,” according to the 110-page complaint.

The lawsuit cites remarks by Lakia Wilson, a student counselor at Spain elementary-middle school, who said it has become a “poster child for neglect and indifference” to creating a quality learning environment.

“The gym is closed because half of the floor is buckled and the other half suffered so much rainwater damage from the dripping ceiling that it became covered with toxic black mold,” Wilson wrote. “Instead of professionally addressing the problem, a black tarp simply was placed over the entire area like a Band-Aid.”

At a press conference Thursday, attorney Tom Bleakley said the situation for children in Detroit schools is like Flint’s water crisis “on steroids”.

“These are deplorable conditions under any circumstances, but certainly not for educational purposes,” he said.

The interim president of the Detroit Federation of Teachers, Ivy Bailey, has said students have continually been exposed to “atrocious, environmental hazards”: lack of heat, rodent infestations and black mold. Bailey criticized statements by Republican legislators, who’ve said the protests by teachers have been misguided.

“We have to do something; we have to advocate for our children,” Bailey said in February. “And whatever the consequences are, we’re going to have to deal with it. But we have to stop bashing our teachers.”

The suit also takes aim at what it describes as a “precipitous falloff” in student performance under emergency management. According to the complaint, more than 75% of students are not proficient in reading and math.

“The defendants harmed Detroit children by establishing procedures and policies of intentional and/ or callously indifferent neglect that increased the likelihood that they would not be college ready at graduation or that they will become dropouts,” the lawsuit states.

Complaints over the expanded powers approved by Snyder have dogged the Republican governor since his term began and he signed a beefed-up version of the state’s emergency manager law, which allows him to declare cities and school districts under financial emergency and place them under appointed management.

In November 2012, Michigan voters overwhelmingly approved a referendum to overturn the law. The Republican-led state legislature enacted Public Act 436 six weeks later – a law virtually mirroring the emergency manager statute rejected by voters. Since Snyder took office, the district has shed nearly half its enrollment, endured serious declines in reading and math scores, and budget deficits have ballooned to more than $700m while a succession of four emergency managers have led the system.

“Public Act 436 largely reenacted the provisions of Public Act 4, the law that Michigan citizens had just revoked to expressly eliminate emergency managers in the State of Michigan,” the five-count complaint stated.

While Flint’s lead contamination crisis has been the focus of several federal and state inquiries, Snyder has also been working to strike a deal with the state legislature to address the Detroit school district’s $3.5bn in long-term liabilities. Parents and teachers are staging a series of so-called “sickouts”, prompted by the dilapidated conditions of school buildings. Under Michigan law, it’s illegal for Michigan teachers to strike, so teachers instead collectively call in sick.

Snyder recently announced he would consider dissolving a controversial education system he launched in 2012 – with the approval of the Detroit public schools’ emergency managers – to run Detroit’s 15 lowest-performing schools. The system, called the Education Achievement Authority, has been linked to an ongoing federal corruption investigation, which the lawsuit said “reveals the extent to which the depraved indifference and damage to the plight of children of [Detroit schools] was allowed to fester by the defendant emergency managers.”

“As the EAA miserably failed in its efforts with respect to these children,” the lawsuit said, “they are included in the class of DPS children who have had their rights violated by the defendants resulting in damage to their educations such as to impact them for a lifetime.”

Lamar Lemmons, a member of the elected Detroit school board, which has fought vociferously against emergency management, said at the press conference: “We do believe some criminal action is due.”

The lawsuit requests a jury and seeks unspecified compensatory and punitive damages.

The governor’s office didn’t immediately respond to a request for comment.