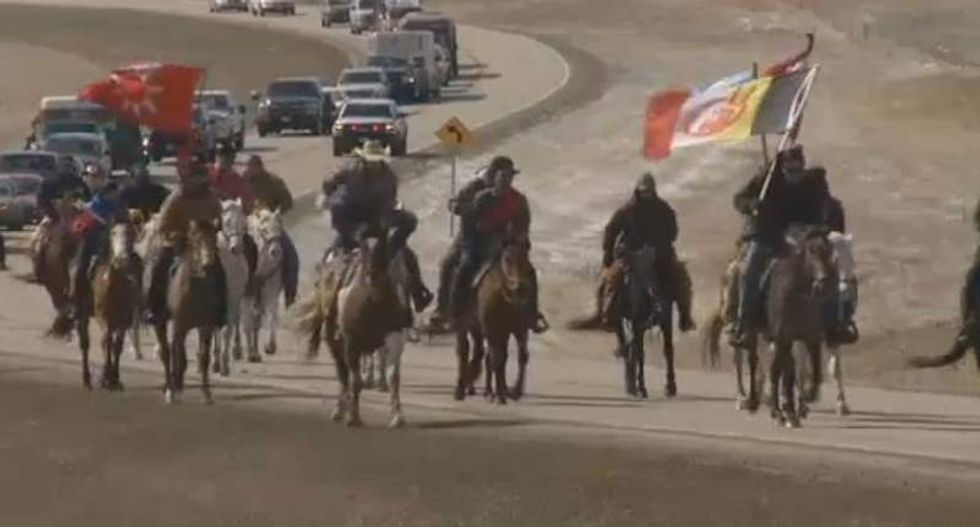 About 200 people rode on horseback to protest against pipeline that encroaches on tribal lands and could pollute Missouri river: ‘We’re looking out for all people’

Dozens of tribal members from several Native American nations took to horseback on Friday to protest the proposed construction of an oil pipeline which would cross the Missouri river just yards from tribal lands in North Dakota.

The group of tribal members, which numbered around 200, according to a tribal spokesman, said they were worried that the Dakota Access Pipeline, proposed by a subsidiary of the Dallas, Texas-based Energy Transfer Partners, would lead to contamination of the river. The proposed route also passes through lands of historical significance to the Standing Rock Lakota Sioux Nation, including burial grounds.

“They’re going under the river 500 yards from my son’s grave, my father’s grave, my aunt who I buried last week,” said Ladonna Allard, a member of the Standing Rock nation and the closest landowner to the proposed pipeline. “I really love my land, and if that pipeline breaks everything is gone.”

“We must fight every inch of our lives to protect the water,” Allard said.

A “spiritual camp” will be set up starting Saturday at the point where the proposed pipeline would cross the river, and the tribal members plan to stay and protest indefinitely.

The group is composed of members of the Standing Rock nation as well as others from North and South Dakota nations, including the Cheyenne River Lakota and the Rosebud Sioux. They joined together to ride, run and walk from the Tribal Administration Building north to Cannonball, North Dakota, on the reservation’s northern edge.

The Missouri river is the primary source of drinking water for the tribal reservation, according to Doug Crow Ghost, a spokesperson for the Standing Rock Sioux and the director of the tribe’s water office, who joined the protest on Friday. Tribal members also fish in the river, he said.

“Because we are going to be fighting this giant, all the rest of the nations came on horseback to say ‘we support you’,” said Allard. “That is why this horse ride is so important to us. Because we’re not alone in this fight. All of our nations are coming to stand with us, and all our allies and partners. This pipeline is illegal.”

The pipeline is currently waiting on a decision from a colonel in the Army Corps of Engineers, who oversees such projects, on whether Dakota Access will be granted a permit to proceed, according to Dallas Goldtooth, a Keep It In The Ground campaign organizer for the Indigenous Environmental Network. The tribes are petitioning for an environmental impact study, which has not at this point been done, into the pipeline.

Goldtooth is optimistic about the tribe’s chances of stopping the pipeline. “It infringes on the tribe’s water rights, which are guaranteed by treaties, and the protocols associated with those rights were not followed,” he said. “The tribes have a really strong standing-point on this issue and we’re confident that we’ll see a whole environmental impact study enacted.”

Energy Transfer Partners did not respond to a request for comment.

“Although we do live on a reservation, the land that [the Dakota Access pipeline is] going to be crossing is on original land that was given us by treaty,” said Dakota Kidder, a member of the Standing Rock nation. “This is where it gets people fired up when you talk about broken treaties.”

“Without water there is no life, and this is our main source,” Kidder added. “It’s not just our issue. Everybody downriver of us is going to be affected, all the way down to the Gulf of Mexico. We’re not just looking out for ourselves; we’re looking out for all people.”

Watch a report on the protest, as aired on KXNET-TV, below.