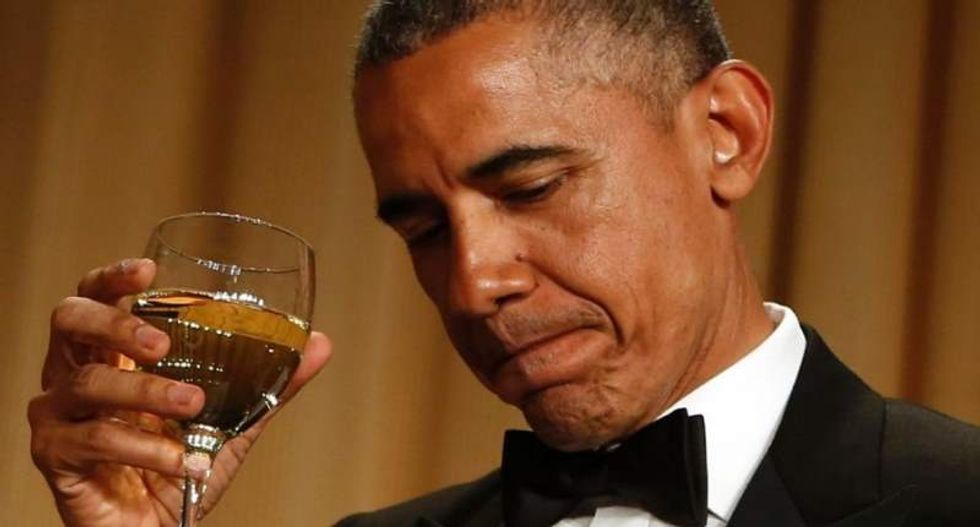 Once a year, the US president attends a party he can't avoid and is asked to make Washington laugh.

When Barack Obama steps onto the stage of the White House Correspondents' Association dinner on Saturday, he will carry out that ritual for the eighth and final time.

The clips will be played again and again and endlessly dissected by pundits -- so finding the right tone and jokes are key.

"This is one of the hardest speeches of the year," said 35-year-old Cody Keenan, who leads a team of speechwriters at the White House.

"Other than the State of the Union address, this is probably the speech we start earliest, just because humor is so difficult," he added.

"It's also the biggest team working on any speech other than the State of the Union address."

This year, the team member with "the pen" and tasked with making Obama funny is 34-year-old Tyler Lechtenberg.

"Jokes in general are some of the most nerve-racking parts of speeches," he said. "With a joke, there is more vulnerability to it. If it flops, that is something that we can take personally too."

One of the first steps in the writing process is developing a broad list of potential topics, which is circulated both inside and outside the White House.

Listening to other people "is a big part of the process" said Lechtenberg. "Every idea in the brain storming stage is a good idea."

But then comes the tough task of whittling all those ideas down.

"We'll probably have maybe 100 jokes total and bring them down to 20-25 by the end," said Keenan. "You've got to have a thick skin because most of your jokes are going to get cut."

Lechtenberg describes the process as having a "herding cats" feel.

There will be some digs at political opponents and some at his hosts and the journalists who cover the White House and have invited all the guests.

"He will spend a good chunk of time making fun of himself," said Keenan. "It's critical."

"You have to show that you are willing to poke fun of yourself to build a little credibility with the audience," he added.

"If you just go out there and rip on everybody else, that's not fun."

One president who shone in that task was Bill Clinton, who in 1993, at the outset of his administration, was lying low in the polls.

"I don't think I'm doing so bad. I mean, at this point in his administration, William Henry Harrison had been dead for 68 days!" he joked.

When it comes to roasting others, there is a fine line between humor and humiliation, especially when the person doing the roasting is the most powerful on the planet.

Obama takes a very hands-on role in crafting his speeches.

"If there was ever something in a speech that's too hurtful, he would take it out," said Keenan.

"We don't want anyone to leave the dinner feeling hurt."

But in 2011 Obama tested the boundaries of that dictum when he poked fun at Donald Trump, a man now vying to be his successor.

For months, the controversy courting businessman had fueled rumors that Obama, the first black American president, was not born in the United States.

At one point Obama even released his birth certificate, while admonishing theorists and the press: "We do not have time for this kind of silliness."

A few days later, he took advantage of the presence of the extravagant billionaire at the dinner to let loose.

"Now, I know that he's taken some flak lately, but no one is happier, no one is prouder to put this birth certificate matter to rest than the Donald," Obama began.

"And that's because he can finally get back to focusing on the issues that matter –- like, did we fake the moon landing? What really happened in Roswell? And where are Biggie and Tupac?"

The roast continued as Trump sat among a sea of laughing guests.

Trump, the Republican frontrunner in the race for the White House, has said he will not attend Saturday's dinner, suggesting that the media would misreport his mood.

"I don't think we have ever held back before so I would not expect anything radically different this time," said Keenan in previewing this year's speech.

What will be different is that it is both Obama's and Keenan's last.

"It's very daunting to think about what I will do after this that has the same sense of purpose to it," he said.

"The notion that I might have peaked at 35 is terrifying," he said with a laugh, adding "it has been a blast."