'Perfect is not on the menu': Maher presses Susan Sarandon on backing Clinton against GOP nominee 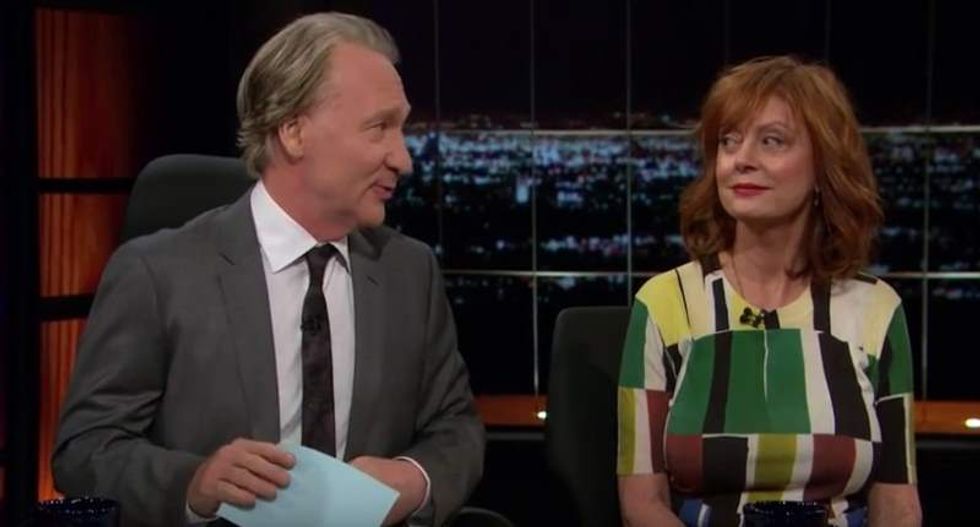 Real Time host Bill Maher tried to get guest Susan Sarandon to say on Friday whether she would back Hillary Clinton if she won the Democratic presidential nomination, The Daily Beast reported.

Focusing on the environment as an issue, Maher argued that Clinton had an 82 percent approval rating from the League of Conservation Voters.

Sarandon, a backer and surrogate for Sen. Bernie Sanders (I-VT), dismissed the rating, accusing Clinton of "selling fracking all over Jersey."

"She's not perfect," Maher replied. "But perfect is not on the menu."

"I think Bernie Sanders is gonna get the nomination," Sarandon insisted. "Don't burst my bubble. Those words cannot come out of my mouth at this point."

Maher also brought up Sarandon's interview with MSNBC host Chris Hayes last month, which drew attention after she said she would "see what happens" if the election came down to Clinton against Republican Donald Trump, arguing that "Some people feel that Donald Trump will bring the revolution."

"Some of the liberals got mad at you because you said if it's not Bernie, that you don't know if you'd even vote for Hillary," Maher told Sarandon.

"Some of the liberals didn't read the article or see the interview," she countered. "They just looked at these misleading headlines that The Daily Beast, The Hollywood Reporter, and The Hill put up there saying that I supported Trump, but if you read it or you saw it, I did not say that."

Maher also compared voting for Clinton as opting to "eat the chicken" on an airline if one's first choice was unavailable.

"That should be Hillary’s slogan: Eat the Chicken," he argued, before asking Sarandon, "Are you going to eat the chicken?"

"I'm a vegetarian," she replied.