Politics, the 'Prosperity Gospel' and why so many Americans believe they are #blessed 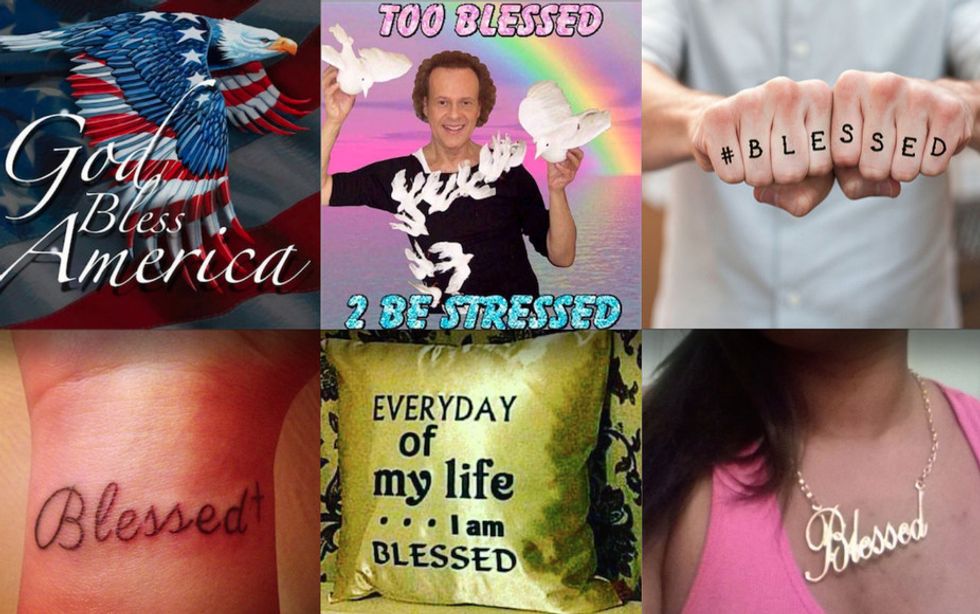 Last month, my colleagues and I were moved by a beautiful and tragic New York Times editorial by Kate Bowler, a religion professor from Duke Divinity School who was recently diagnosed with stage 4 cancer.

Bowler recalls how the prosperity gospel transformed the Mennonite farming community in Manitoba where she grew up. When the community’s pastor showed off the motorcycle he received for “pastor’s appreciation day,” it signaled a new religious attitude about material wealth. She describes explaining this change as her “intellectual obsession.”

The experience of fighting cancer, however, gave her fresh insight to this obsession: can the prosperity gospel make sense of radical and senseless tragedy? Or does its theology rob us of the opportunity to come to terms with our suffering?

Today, America seems divided between those who engage with some version of the prosperity gospel and those who smugly dismiss it as fraudulent and puerile. While there are a number of problems with the gospel, it’s important to look at why this strand of religious thinking evolved in the first place, and why it persists.

A right to wealth and health

The prosperity gospel is based on a simple premise: God wants us to live “in abundance.” But in order to receive the gifts we are promised, we must demonstrate faith and claim the prosperity that is rightfully ours.

Even if many Americans have never heard the term, most are familiar with images of oft-satirized televangelists shaking down their viewers for donations in return for blessings.

The prosperity gospel has also been used to explain good health and even good luck.

After a string of lethal tornadoes moved though Texas in December 2015, a survivor named Sabrina Lowe claimed that God had given her authority over the winds – and that her family had “commanded” the tornado to move elsewhere.

Lowe’s narrative strangely inverted feelings of survivor’s guilt that often follow natural disasters. Instead, she claimed agency and credit for her good fortune. Like the televangelist’s promise of financial blessings in exchange for “seed” donations, the idea of commanding immunity from natural disasters is also a manifestation of prosperity gospel theology.

Bowler’s work has shown that the prosperity gospel is much more embedded within American culture than these spectacular examples might suggest.

The origins of the prosperity gospel date back to a 19th-century movement called New Thought, which asserted that health and fortune can be achieved through positive thinking. New Thought never went out of fashion: it survives today in books like The Secret, which promises financial success and physical health to those who think positively. The book has sold more than 19 million copies.

Bowler credits the early 20th-century pastor E.W. Kenyon with creating a new theology that blended New Thought with the idea that the Bible promises Christians a “legal right” to prosperity. After World War II, the prosperity gospel was spread by popular evangelists like Oral Roberts and became associated with Pentecostalism and televangelism.

While relatively few congregations define themselves as preachers of the “prosperity gospel,” elements of the theology saturate American culture.

Controversial televangelist Joel Olsteen claims that he “shuns” the prosperity gospel label, but still asserts that those who are “blessed” can expect financial rewards along with healthy families and peace of mind. Talk show hostess Oprah Winfrey has been accused of promoting prosperity gospel thinking by pushing inspirational messages to her audience that emphasize the benefits of a positive attitude. Instagram photos and tweets marked with the hashtag “#blessed” populate social media feeds.

Meanwhile, politicians will often claim that America’s prosperity is a direct result of God’s blessing.

In a Facebook post, Republican presidential candidate Ted Cruz says God has blessed America – before hitting up his followers for money.

Beyond the United States, the prosperity gospel is now spreading rapidly to countries like Brazil and Nigeria. In fact, Nigeria is now home to some of the wealthiest pastors on the planet – which, from the perspective of the prosperity gospel, is an accomplishment to be proud of.

Theologians have denounced its denial of the reality of suffering. Religious scholar Reza Aslan has called prosperity gospel preachers “charlatans,” and the Lausanne Movement, a group cofounded by Billy Graham, has accused them of “gravely distorting the Bible.”

In a 2015 editorial for Time, Kareem Abdul Jabar called the prosperity gospel “war on the poor,” arguing that it works like to lottery, exploiting the hopes of the poor and desperate. Journalist Sarah Posner writes that the movement equates capitalist ideology with Christianity in order recruit the poor as foot soldiers for a conservative culture war.

While liberals associate the prosperity gospel with conservative Christianity, it also has critics on the right. In 2010, Iowa Republican Senator Chuck Grassley launched an investigation into six televangelists who have been known to preach the prosperity gospel. After more than three years, Grassley’s investigation failed to discover any evidence of wrongdoing or impose any penalties.

Other investigations have exposed the gospel’s capacity for duplicity.

In 1991, ABC’s “PrimeTime Live” featured a devastating expose of Robert Tilton, a televangelist who mailed handprint tracings, packets of “holy oil” and other mementos to his donors. He encouraged recipients to write their needs on these objects and mail them back with donations so that Tilton’s ministry could ensure their prayers are answered. “PrimeTime Live” discovered the donations went directly to a bank for deposit.

In the dumpster behind the bank their team found sacks of unread mail from believers desperate for help.

But rather than further eviscerate the prosperity gospel, Bowler’s study attempts to render this movement understandable.

Drawing from her ethnographic research in prosperity gospel churches, she shows how this movement is not simply about “praying yourself rich,” but is instead a “comprehensive approach to the human condition.”

Far from lazily hoping that God would somehow fix all their problems, Bowler found that the prosperity gospel requires practitioners to cultivate an intense mental discipline in order to constantly suppress thoughts of negativity or doubt.

The idea of the prosperity gospel as a system for controlling one’s thoughts may explain its popularity in a country where 18 percent of adults suffer from anxiety disorders. Americans spend an estimated US$42 billion a year treating these disorders.

Bowler’s findings suggest that one reason for the prosperity gospel’s popularity is that it serves a function similar to therapy or medication. With some discipline, it may, in fact, be possible to feel “too blessed to be stressed.”

Even though historians of religion are trained to avoid making normative claims about how religions should be practiced, several reviews of Blessed were critical of Bowler’s sympathetic portrayal of the prosperity gospel. They felt she had downplayed the outrages of figures like Tilton. Some even called her an apologist.

But in her editorial, Bowler is able to speak with a more personal voice. She offers some wise critiques of the prosperity gospel and the broader project of finding meaning in human suffering.

Emphasizing her perspective as a Christian, as well as a historian, she writes:

The prosperity gospel has taken a religion based on the contemplation of a dying man and stripped it of its call to surrender all. Perhaps worse, it has replaced Christian faith with the most painful forms of certainty. The movement has perfected a rarefied form of America’s addiction to self-rule, which denies much of our humanity: our fragile bodies, our finitude, our need to stare down our deaths (at least once in a while) and be filled with dread and wonder. At some point, we must say to ourselves, I’m going to need to let go.

In other words, while the prosperity gospel clearly “works” for its believers, its benefits come with a price. The promise that we can have whatever we want leaves us ill-equipped to confront the realities of death and suffering.

Tragedy becomes much harder to deal with when we are conditioned to think of ourselves as “blessed.”