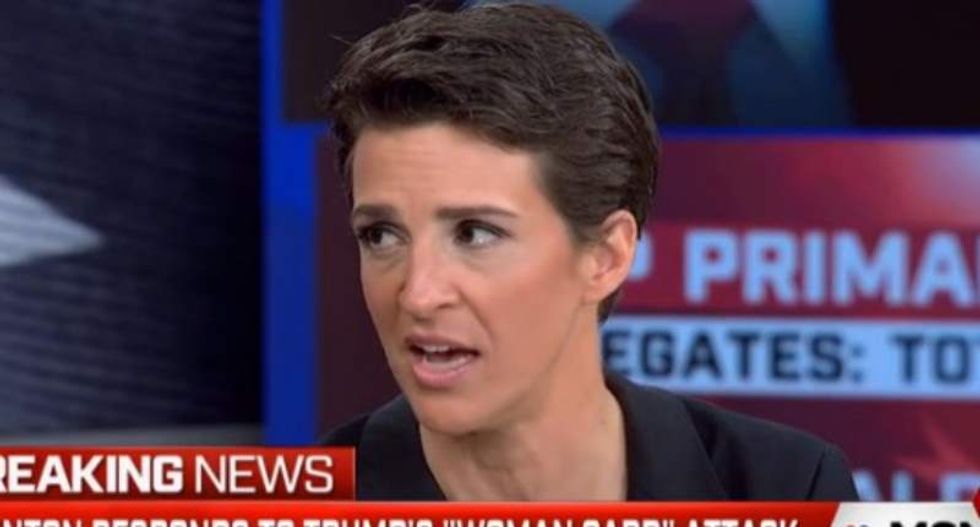 "As our colleague and friend Nicolle Wallace pointed out earlier this evening, Donald Trump does have a general election problem," Maddow told co-host Brian Williams. "Even if he gets this nomination, even if everything goes the way it has been for him during the primary as he heads toward the general election, he brings with him a big problem with women voters."

Earlier in the evening, Trump said he did not think Clinton would get "5 percent of the vote" if she were a man.

"The only thing she's got going is the woman's card," he said. "And the beautiful thing is, women don't like her."

But as Vox noted, Trump is viewed unfavorably by more women than Clinton -- 52 percent of respondents, compared to 39 percent -- according to a survey taken by the nonpartisan firm Morning Consult.

"To say about the woman that you're running against that the only reason she's in the race is because she's a woman -- that her achievement is basically the result of some sort of affirmative action, some favor being paid to her as a woman -- and that as a human being she is patently unqualified when she is the former two-term senator from New York and the former secretary of state and has the experience that she's had, I do think that even a lot of Republican women will read that wrong."

Trump won all five GOP primaries on Tuesday, while Clinton won four out of the five Democratic contests, which Maddow said puts them on a course toward meeting in the general election in "realpolitik," if not according to their respective parties' delegate tallies.