Republican Paul Ryan: I do not want nor will I accept the nomination 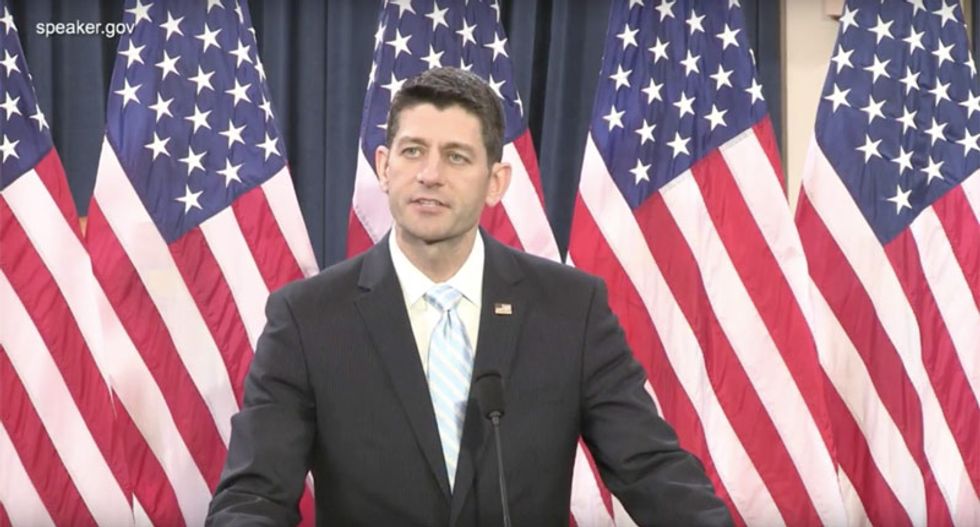 House of Representatives Speaker Paul Ryan said on Tuesday he would reject any attempt to draft him as a presidential candidate, trying to silence speculation that he could surface as a unity choice should Donald Trump or Ted Cruz falter.

"Let me be clear: I do not want nor will I accept the nomination of our party," Ryan said in remarks at the Republican National Committee.

Ryan, the top elected Republican in Washington and the party's 2012 vice presidential candidate, has been the subject of persistent speculation that he could emerge as the nominee if an impasse over the party's pick develops at the July 18-21 Republican National Convention in Cleveland.

In an interview with Milwaukee's WISN radio earlier on Tuesday, Ryan said: "I am going to try again today to put this bed. The answer is 'No' and my strong opinion is, if it goes to an open convention ... my answer is the delegates should pick among the people who actually ran for president this year ...

"I made a really clear choice not to run for president. Therefore, I will not be nominated. I will not allow my name to be placed in nomination and it will not be me. ...I just want to be really crystal clear," he said.

Ryan has repeatedly said he is not interested in entering the presidential race, but advocates for such a scenario have pointed out that he was cool to becoming House speaker until he was finally persuaded to take over from John Boehner last year.

Republicans who see a disaster looming in the Nov. 8 presidential election if Trump or U.S. Senator Cruz of Texas is the nominee have harbored hopes of drafting a popular party figure like Ryan or 2012 candidate Mitt Romney.

For that to happen, no candidate would have garnered the 1,237 delegates required to win the nomination on the first ballot at the convention, and delegates there would have to approve a consensus alternative on a second or subsequent ballot.

Ryan's announcement came on a day when long-shot Republican presidential candidate John Kasich portrayed himself as an antidote to what he called the divisive politics of Trump and Cruz and criticized them as wanting to take the United States down a "path of darkness."

Kasich's "two paths" speech in New York City was an effort to distinguish himself from his rivals and carve out a space for himself as a positive, reasonable conservative a week before New York state's Republican and Democratic primaries on April 19.

Kasich - running a distant third behind Trump and Cruz and with no chance of capturing the Republican nomination unless he can emerge from a contested convention - did not mention Trump and Cruz by name but left no doubt as to who he was talking about.

He lashed out at Trump proposals to deport 11 million illegal immigrants and impose protectionist trade policies. He ridiculed Cruz's idea for a business flat tax, calling it a value-added tax. These are examples of a path of darkness, he said.

"Some who feed off of the fears and anger that is felt by some of us and exploit it feed their own insatiable desire for fame or attention. That could drive America down into a ditch, not make us great again," Kasich said, referring to Trump's signature line.

As 14 other rivals have dropped out of the race, Kasich has doggedly stayed in even though he has underperformed, winning only his home state of Ohio. But his goal is to emerge from a contested convention as a unifying nominee for the November general election, one who polls well against Democratic front-runner Hillary Clinton.

"A united America is undefeatable," Kasich said. "We are an exceptional country."

Whether his speech will have an impact on the race at this late stage is far from certain.

Trump is favored to win the April 19 primary in his home state. He holds a huge lead in opinion polls there, with Kasich running a distant second and Cruz in third place.

A victory for Trump would help tamp down concerns among his supporters that he is suddenly vulnerable after Cruz beat him in Wisconsin last week and won all Republican delegates in Colorado on Saturday.

In some good news for Trump, he was formally declared the winner of Missouri's Republican primary, which was held on March 15.