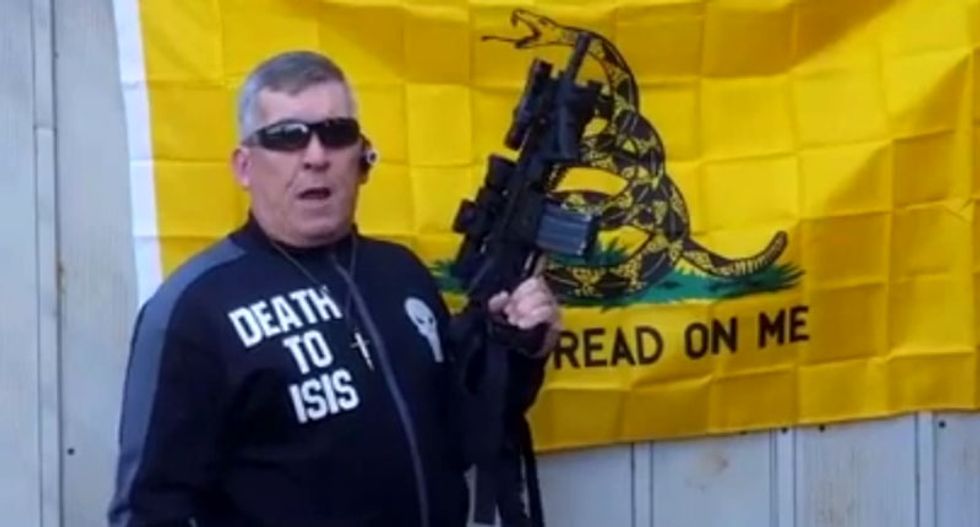 Georgia State Capitol police on Monday warned that an anti-Muslim militant planned to hold an unpermitted, gun-toting demonstration outside the statehouse on April 18, where he plans to desecrate a Quran and other items.

According to the Atlanta Journal-Constitution, the Georgia Building Authority refused to grant James Stachowiak a permit for his "United against Islam and Islamic immigration refugee rally" at Liberty Plaza.

But Stachowiak plans to hold his rally anyway.

Stachowiak said the rally is meant to “raise public awareness to what we perceive as a threat to our nation from Islamic immigration and refugees. Also the dangerous agenda of the current administration.

“We plan to have speakers address this or should I say these issues. We also plan to shred images of Obama, Loretta Lynch, Hillary Clinton and Muhammad along with the shredding of the Koran.

“This will be an open carry event with the use of long arms as Georgia law allows.”

On his Facebook page, Stachowiak frequently posts right-wing conspiracy theories and anti-Muslim memes. Stachowiak appears to be affiliated with the Three Percenters and "Patriot" militia movements. He has expressed support for Republican presidential candidate Donald Trump and the group of militants who occupied the Malheur National Wildlife Reserve in Oregon.

The Southern Poverty Law Center described him as a "longtime militia organizer and foul-mouthed talk show host." He told the organization in 2010: "I'd rather go to a movie or make payments on a jet ski, but I have to buy ammo. I'm concerned about civil unrest, my neighbors going crazy, round-ups, foreign troops, the New World Order."

In a recent video announcing his anti-Muslim event, Stachowiak claimed that the Quran was a "declaration of war."

"They have shown their true hand openly now," he explained. "The president, the attorney general, and every single Islamic organization in America who wants to overturn our Constitution, that want to silence our free speech, that want to impose draconian laws -- Sharia -- again the Quran is nothing more than toilet paper writings spurted from hell and it should be treated with the respect that you would give a piece of dirty toilet paper."

Here we go my first video of several of the Unite Against Islam rally April 18th 2016 I have a contact number I give in the video to text me if you're going and or if you want me to return your call. That number is 706-619-9586 or call 706 394-8019We will gather at 11 a.m. on the public sidewalk in front of the Georgia state capital come armed and bring a sign against Islam refugees Obama administrationI,Hillary Clinton. Also bring Images of Obama Loretta Lynn's Hillary Clinton Muhammad to destroy with other Patriots in front of the Georgia State capital in CNN in an act of defiance. Everyone will be given an opportunity to speak on a bullhorn see you there spread the word because the days of Islamic intimidation come to an endTHIS RALLY WILL BE STREAMED LIVETEXT ME AT 706-619-9586 and I will return your calls, Or call 706-394-8019

Last month, Stachowiak filmed himself standing outside an Islamic Center in Augusta while holding a rifle after the center's imam received an award from the Council on American-Islamic Relations. "All mosques are simply barracks for jihad," he wrote in the video's description.

Stachowiak made headlines last year for standing near a shopping center in Augusta with a rifle and a sign that called Muslims "savages." RightWingNews praised his "AWESOME" sign, while The Conservative Tribune hailed it as "brutal." A few months later, he pulled a similar stunt outside a Walmart store.

“When the call people like me, because I have a tactical weapon here to defend my free speech… we’re the danger? NRA members like myself, we’re the danger? No. The danger is the people that are raping women and devaluing human life,” Stachowiak told WJBF.com.

He was arrested for criminal defamation in 2010 after posting a LinkedIn profile photo of a California man on his website and falsely labelling him a terrorist.