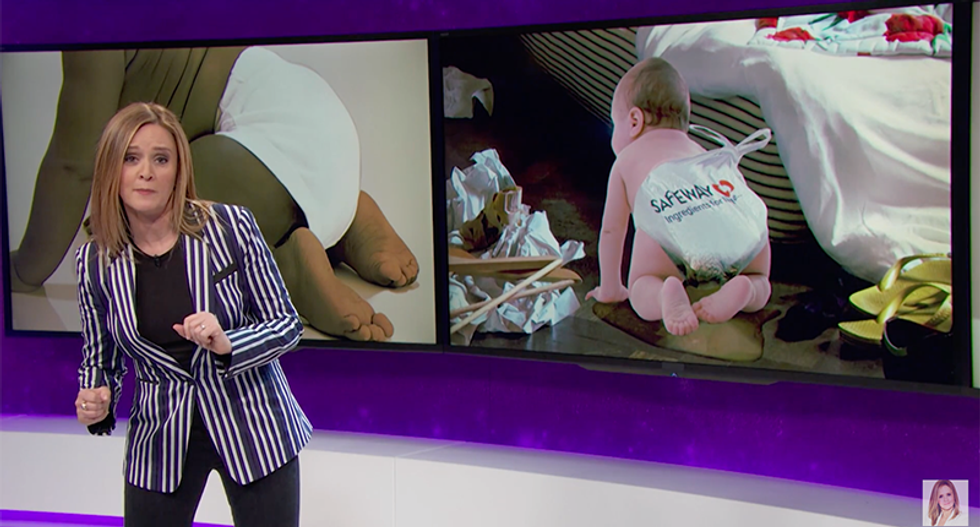 If there's anything the rapper Eminem should have taught the world it's the fact that diapers are considered a luxury item. "And I can't provide the right type of life for my family; 'Cause man, these goddamn food stamps don't buy diapers," he says in his song "Lose Yourself." There's a reason for that: Republican politicians want to punish women for having sex.

In this week's "Full Frontal," host Samantha Bee addressed President Barack Obama's plan he launched at the conference SXSW to coordinate diaper makers, logistics companies and internet companies to "make bulk purchases of diapers so that they can distribute them to low income moms," Obama explains.

Eminem explained the problem, but there was a bill proposed in Congress by Rep. Keith Ellison (D-MN) and Rep. Rosa DeLauro (D-CT) to fix the food stamp regulations that put diapers in the same category as cigarettes, liquor and pet food. The problem with that bill, however, is that Congress doesn't pass bills anymore.

"Diapers are like fine whiskey," Bee explains. "They're expensive and it's impossible to parent effectively without them." Yet, you'd be surprised at how many people don't think about the importance of providing an adequate place to dispose of baby poop.

When California attempted to pass its own version of the "baby diaper bill," people jumped at the opportunity to show babies just how much excrement adults can come up with. State house member Shannon Grove (R-Bakersfield), for example, told the local news it wasn't the state's responsibility to care about babies. "Look, you whiny babies," Bee explains. "If you didn't want to wallow in your own filth like a Dickensian orphan, you shouldn't have chosen poor parents. It's called 'personal responsibility.'"

The Calfornia news report got feedback from viewers who also opposed the program, such as one woman who said she preferred the state offer free child care so that women on food stamps could get a job. The problem with that logic is that child care doesn't take your child if you can't provide enough diapers.

"I guarantee you if you give a box of Huggies to a woman who spent the last six months trapped in a smelly apartment with an infant that poops in a Safeway bag she'll get a job so fast it'll knock the flag pin off your lapel," said Bee.

Another viewer suggested giving needy families $100 worth of cloth diapers that they can reuse. Bee shut the idea down by simply telling people to "f*ck off with this cloth diaper nonsense." Besides, it isn't as if the Berkeley-hippy diaper-cleaning-fairy is going to magically come and wash your baby's poopy diapers for you while they're at daycare.

Finally, the most hypocritical comment was from a woman who says that people should just stop having children if they can't financially support them. Bee shuts that down with the best closing of all time:

"Oh, my god, conservatives, make up your mind about poor babies! We thought you wanted them to be born. Why else would you oppose free contraception, wage jihad against Planned Parenthood, fight the FDA on Plan B and make abortion as unattainable for poor women as a ticket to Hamilton? Like it or not, there are a lot of poor babies and it sounds like all you've got for them is the same useless advice you're giving their mothers: Keep your legs crossed."