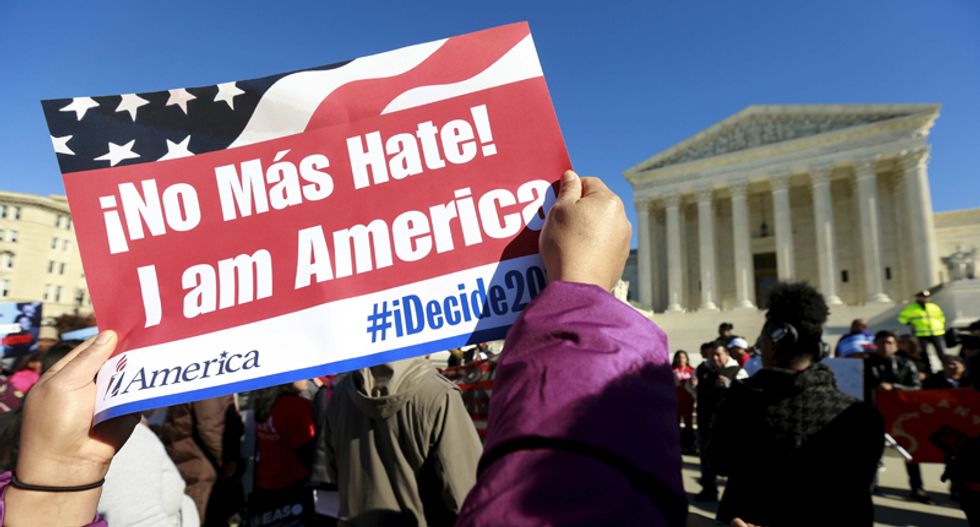 A protester holds a sign as immigrants and community leaders rally in front of the U.S. Supreme Court to mark the one-year anniversary of President Barack Obama's executive orders on immigration in Washington, in this file photo taken November 20, 2015. REUTERS/Kevin Lamarque/Files

One of the pivotal issues in the closely watched battle over President Barack Obama's executive action on immigration to be argued before the U.S. Supreme Court on Monday is the rather banal subject of the money Texas pays for driver's licenses.

To bring the case and have legal standing, the state of Texas, the lead plaintiff in the case, must show that it has been hurt in some way. In its filing, Texas argues that it would take a hefty financial hit for processing driver's licenses for immigrants in the country illegally whose deportation would be deferred under Obama's executive action.

The Texas attorney general's office said Obama's action "would cause a spike in driver's license applications, thus making those licenses much more costly to issue."

But the numbers cited by Texas in its claim far exceed what the state currently pays annually for all its driver's license services.

"It is kind of dry, legal stuff, but it is of great consequence," said Bill Beardall, executive director of the Equal Justice Center in Texas, which provides legal help for low-income families and immigrants.

If the Supreme Court finds that Texas lacked a sufficient "injury" to sue, the case ends there and Obama wins.

In a filing with the Supreme Court, Texas contends that processing driver's licenses for immigrants shielded from deportation under Obama's action would cost the state more than $103 million in additional funds to process as many as 520,000 people seeking licenses.

In its explanation of costs contained in a 400-page appendix to the high court, Texas said the additional immigrants it expects to seek driver's licenses would force it to hire new staff, expand office space and bolster technology.

"The added customer base that may be created by the president's executive action, assuming an applicant will be able to demonstrate they are authorized to be in the United States, will substantially burden driver license resources without additional funding and support," Texas stated in the document.

The state said that for each additional 1,750 people seeking driver's licenses, it would have to hire roughly two full-time employees to process them.

That number does not match the figure in this fiscal year's state budget, which said the average number of driver's licenses and records produced by a single full-time employee is 2,638 annually, a figure triple the efficiency of the state's claim to the Supreme Court.

Texas said in its Supreme Court filing that to process applications from the immigrants who fall under the terms of the executive action, it has to make additional checks. It also said the average costs of those checks is about 75 cents an applicant.

In breaking down the implications of the latest flood of court decisions, Toobin said that the court is completely insulated from public opinion given that they have received lifetime appointments to the bench.

Jose Mario Licona and his family spent 18 hours in a refrigerated truck being smuggled to the Mexican-US border -- a journey he feels lucky to have survived.

Others have been less fortunate, including dozens of migrants from Mexico and Central America found dead on Monday after being abandoned in a sweltering tractor-trailer in San Antonio, Texas. In all, 53 people died in the incident.

The US Justice Department will investigate the New York police agency that inspired the hit TV show "Law & Order: Special Victims Unit," over its treatment of sexual assault victims.

Two federal prosecutors in New York announced Thursday in a joint statement that the Special Victims Department (SVD) would be investigated to determine whether it "engages in a pattern or practice of gender-biased policing."