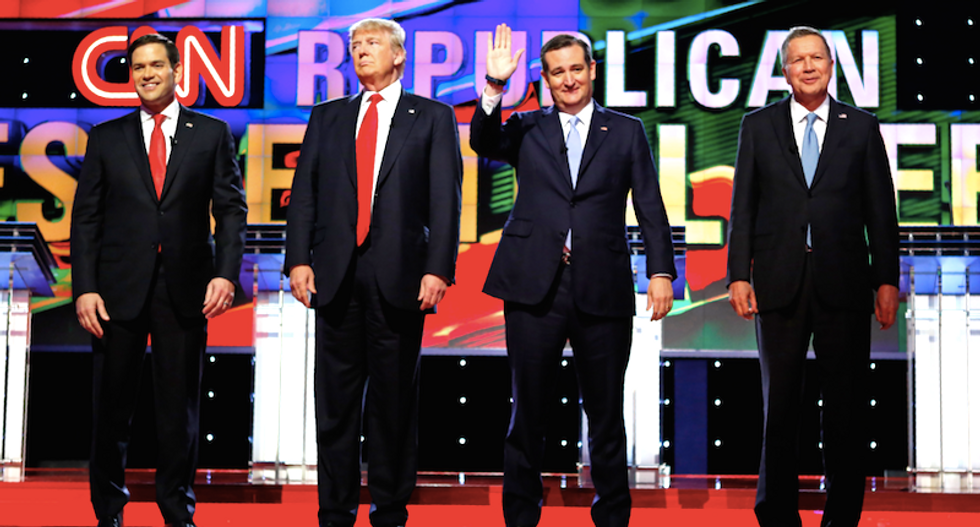 Marco Rubio, Donald Trump, Ted Cruz and John Kasich stand together onstage at the start of the Republican candidates debate sponsored by CNN at the University of Miami in Miami, Florida, March 10, 2016. (REUTERS/Joe Skipper)

In the midst of our tumultuous campaign season, our long stable two-party system appears to be fraying at the seams. Watching Donald Trump sow disarray in the Republican ranks, we are reminded that political institutions are not necessarily permanent. Major political parties in America can collapse. And as we reflect on this possibility, scholars and pundits alike look to the past for insight. Many find an intriguing precedent in the rapid demise of the American Whig Party. From the early 1830s well into the mid-1850s, the Whig Party joined the Democrats as one of the nation’s two major parties. As late as the winter of 1853, a Whig president occupied the White House. By the fall of 1855, the Whig Party was effectively extinct. Clearly, dramatic change in American party politics can happen very, very fast.

But are we really witnessing that kind of transformation today? Probably not. Looking back, the underlying causes of the Whig Party’s downfall seem so much graver than today’s turmoil, fascinating and unexpected as it has indeed been.

The major American political realignment of the mid-1850s had been brewing for decades due to fundamental divisions over the place of slavery in American politics. The maturation and politicization of those divisions is the story I tell in my new book Liberty Power: Antislavery Third Parties and the Transformation of American Politics. By the late 1830s a small and radical group of abolitionists had become fed up with the major political parties, the Whigs and Democrats, both of which systematically downplayed slavery to compete instead over seemingly unrelated issues like taxation, trade policy, banking, and infrastructure spending. Abolitionists, by contrast, insisted that those issues were secondary to combatting the southern “Slave Power’s” control of federal policymaking. Focusing on the questions of slaveholders’ national political power and of slavery’s future in America, antislavery third parties (the abolitionist Liberty Party from 1840 to 1848 and the more moderate antislavery Free Soil Party from 1848 to 1854) relentlessly attacked the major parties’ inherent incapacity to offer meaningful antislavery policy outcomes. These antislavery activists fought fiercely, and ultimately successfully, to demolish the existing party system. As the slavery issue grew increasingly salient in the face of rapid national expansion, disputes over slavery’s place in new western territories, and conflicts over fugitive slaves, old issues mattered less and less to average northern Whig voters.

The 1852 election was a disaster for the Whig Party. The party crafted a measured proslavery platform distasteful to many northern Whigs, thousands of whom simply stayed home on Election Day. Two years later when Congress passed legislation that could introduce slavery into Kansas, the teetering Whig Party came tumbling down. A new coalition combining most of the Free Soil Party, a majority of northern Whigs, and a substantial number of disgruntled northern Democrats came together to form the Republican Party. In under two years, the new party emerged as the most popular political party in the North, electing the Speaker of the House in February of 1856 and winning 11 of 16 non-slaveholding states in the presidential contest later that year.

Though there were a host of issues around which this Republican Party emerged and numerous reasons for the Whig Party’s collapse (including ironically many former Whigs’ disgust at the growing “problem” of Irish Catholic immigrants), the one policy goal that united all Republicans was opposition to the expansion of slavery. Since the 1830s, abolitionists had argued that the Slave Power unfairly controlled the national government and needed to be stopped from further extending slavery’s reach. Now, the new Republican Party was organized around precisely this agenda. Between the late 1840s and mid-1850s, the old party system had collapsed with stunning rapidity. Just a few years prior, such developments would have been almost completely unimaginable to all but the most far-seeing antislavery political spokesmen. So yes, party politics have at times changed quite dramatically quite quickly.

This fact thus raises the question of whether what we are now watching unfold in the Republican primaries is the signal of a coming cataclysm that will kill or revolutionize the Grand Old Party. But I doubt that the current Trump campaign puts today’s Republicans in an analogous position to the Whigs of the 1850s. When the Whig Party collapsed and northern Democrats divided in the mid-1850s, it was because both of those old parties had failed to respond to the threat of slavery’s expansion, which was fast becoming the major national issue—one which many Northerners had come to care more deeply about than any other policy question. I would be very surprised if Trump has established policy stances that are comparably critical for Republican voters and sufficient to make them permanently abandon their party.

If, however, we are indeed witnessing a national party blowup the likes of which we saw in the 1850s, it is a sad state of affairs given that many Trump voters’ grievance is that the modern Republican Party leadership is insufficiently ethnocentric, hypernationalistic, and alarmist. The collapse of the Whig Party in the 1850s created national chaos, and ultimately civil war, but for many Americans the risk of dramatic political upheaval was worth it because of their insistence that slavery’s expansion be stopped. It would be quite a commentary on the limits to the progress our nation has made since then if the predicted impending shakeup were to be built on demands for a more insular, more reactionary, and more discriminatory national politics.